On December 7, TFT Set 8 will be hitting the live servers. And although new TFT sets are always popular on PBE servers, hence the long queues, there are many players who will be playing this set for the first time. If you are one of these players and didn’t have the chance to get familiar with the new set, units or the new hero augments, you might have a hard time figuring out what are the best comps in the game. In this guide, you can find five of the best-performing comps, at least for me.

Keep in mind, these comps were doing well during the last days of PBE. They should still be strong on live when Set 8 hits, but there can always be last-minute nerfs. 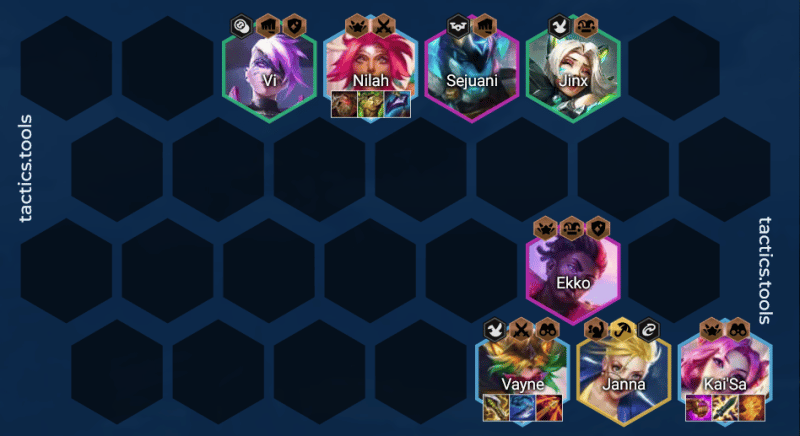 Ever since the first day of PBE, reroll comps have been very dominant in the meta. And although the 1 and 2-cost rerolls started to slowly fall off, due to players figuring out the traits and high-cost carries, Vayne and Kai’Sa stayed as powerhouses. In a set full of very good tanks and good defensive stat traits like Aegis, both Vayne and Kai’Sa have anti-tank abilities, which makes them quickly shred through beefy frontlines.

This comp is not only strong but also easy to play. It is a reroll comp with three 3-cost units, which means you can roll at level 7 and hit quickly. Also, you have three units that want three different kinds of items (AP for Kai’Sa, AD for Vayne and tank for Nilah) which means you won’t have items you can’t use. Unless you low-roll a bunch of Cloaks, of course.

And while most of this comp is pretty set in stone, you can flex Vi, Sejuani and Janna’s spots. For example, Zac and Fiddlesticks can be played as other frontline units, Mordekaiser can be splashed in for magic shred if you don’t have Static Shiv, etc. 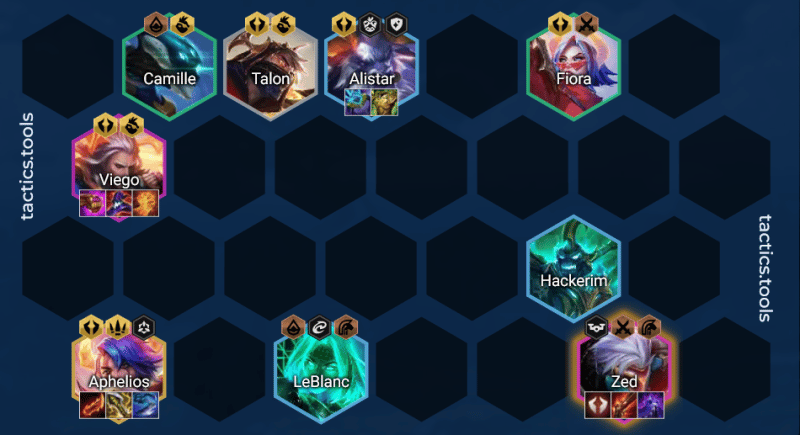 After starting out the set in a very underwhelming state, Virgo quickly became one of the premier AP carries with some buffs, which is good news since he is the 4-cost carry of one of the most potent traits, Ox Force. To play this version of the comp, you can start with AP items and use an early Talon as your item holder. An upgraded board of Talon/Sylas/Camille +1 Ox Force can win streak until you find a Viego. Alternatively, you can lose streak and go for a 3-2 rolldown with max economy.

But keep in mind that to play this version of the comp (with Hacker), you will need an Ox Force emblem. If you don’t hit it as an Augment or can’t get a Spatula, you can play Annie instead of Zed. In this version, you can keep LeBlanc if the A.D.M.I.N is suitable for your comp or drop her if it’s not. The best replacement units, in this case, are Samira for Sureshot, Fiddlesticks as frontline CC or Janna as a flex unit. 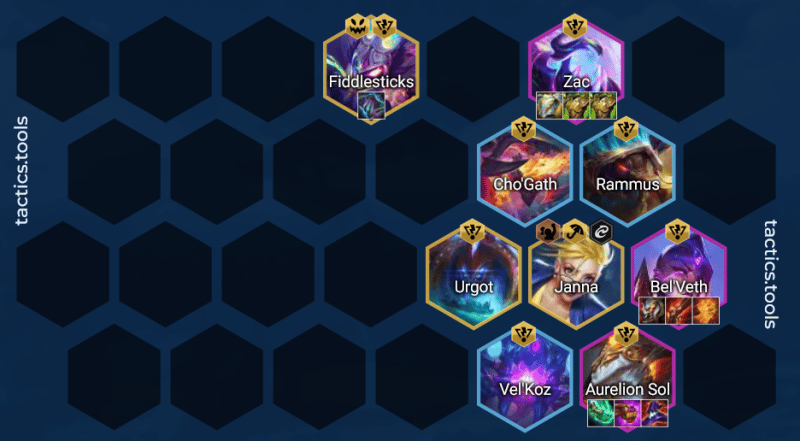 Threats are one of the most exciting traits ever introduced to the TFT. Not only the concept of the trait is pretty interesting, but the units and their abilities are also perfectly designed. Bel’Veth is one of the best AD carries in the set, Zac is one of the best tanks and there are multiple utility/secondary carries belonging to the Threats.

Now to play this comp, you don’t need to do anything special. It is usually best when you aren’t offered a Hero Augment first, but it is still playable if you were. Try to play to your board’s strength till Stage 3-2, and hope that you hit the Threat Level Maximum Augment at this point. Despite multiple nerfs, this Augment is still very overpowered and can mean a guaranteed top three by itself. But not to worry, the comp can still be played without it as well. Make sure you can get to level 7 around 4-1 in a healthy state and at this point just roll for any Threats.

Before you hit your units the best item holders are Jax for Bel’Veth’s AD items and Ezreal for the AP items you would put on Aurelion Sol. 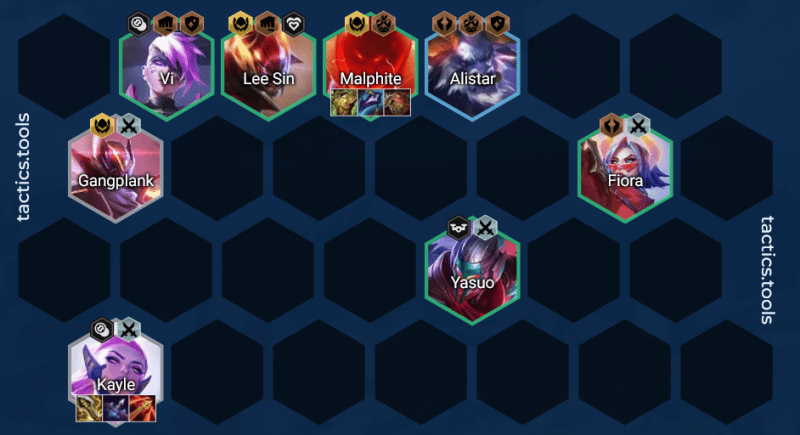 Supers aren’t as strong as in the early days of PBE. Most people figured out the other comps and you can’t stay as healthy as you used to while rerolling. And this comp doesn’t come online before you hit at least a couple of three-star units, so it is hard to play unless you start with three Kayles and multiple Supers units.

But let’s say you hit some, and want to play this comp. The most important thing is to never level up. You want be level 4 at 3-1 with as much gold as possible, and roll down for Kayle and Gangplank. If you can’t three-star them on this rolldown, it’s okay. Just slow roll at level five and level to six when you do. Keep slow rolling at level six for Malphite, Lee Sin and your other 2-cost Duelists if you can hit. Try to three-star as many units as you can, but once you upgrade your Kayle and all three Supers you can push levels if you don’t have seven or eight Fiora/Yasuos. 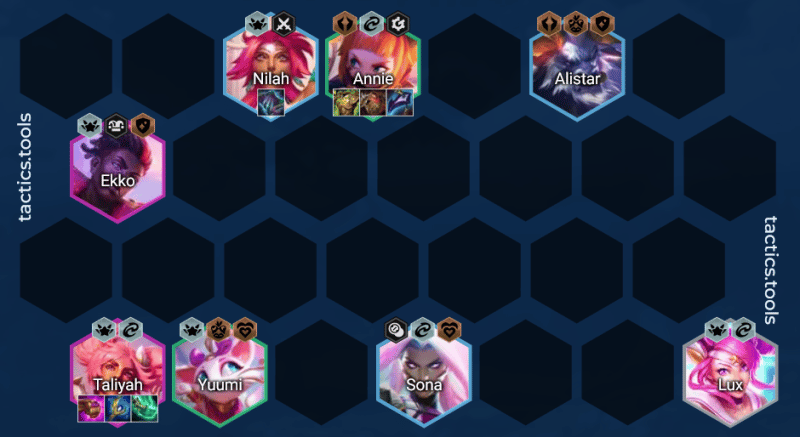 With the recent Shojin buffs the item went from unusable to one of the best items in the game. This means AP carries, especially Star Guardians, are rejoicing. And Taliyah is probably the best AP carry in this set. Not only she has easy backline access to enemy carries if you can position well, but with her Star Guardian trait, she cast very fast very often. And it is very easy to tech in Hearth for AP stacking.

During the early game, you can play multiple different units. Lulu and Lux are the best item holders for your Taliyah, and they let you build toward your end-game comp. You can play Lulu/Annie +1 Gagdeteen, or play Lux/Annie/Yuumi/Rell for Star Guardians. As you keep leveling, just replace the units when you hit upgrades. In this variation of the comp, you can swap out Sona and Nilah for Janna and Syndra when you hit level eight. If your frontline is a little weak, or the lobby is really magic damage heavy, you can take out two Star Guardians (Yuumi and Nilah/Syndra) for Vi and Sejuani.

Other TFT Set 8 Team Comps You Should Try

For more guides about TFT Set 8: Monsters Attack, follow us on ESTNN.