We dive into reasons why this beloved classic is worth picking up.

Age of Empires 2: Definitive Edition will make its way to the Xbox Game Pass on January 31, 2023.

The PC Game Pass is known for bringing a good variety of high-value titles to gamers everywhere for a ridiculously small subscription fee. Sometimes, a few of the "repeat" titles found on the Game Pass bring back revered classics for the masses to enjoy. Vestiges of the early days of PC gaming that helped elevate the artform. Suffice to say, Age of Empires 2: Definitive Edition is one of those games.

The remaster for the Age of Empires (AOE) sequel was first released in 2019. In its re-run on the Game Pass, Xbox players will be able to enjoy its console port which includes a huge charcuterie of voice-acted DLCs and free map expansions. Here's why you should give Age of Empires 2: Definitive Edition a try.

Ever wonder how real-time strategy (RTS) games got popular?

On par with legendary titles like StarCraft and Civilization, Age of Empires helped define the videogame genre when the industry was on the cusp of the 21st century. This was way back when physics engines like Havoc weren't even being used yet.

The original game made itself unique by taking a slower approach in its gameplay as the ages advance. This focuses much of the game's attention to its core promise: experiencing history's greatest moments in the shoes of those who made it.

Taking on the unique challenges that Age of Empire 2: Definitive Edition holds a lot of fun on its own, but considering how outdated some of the mechanics are, revisiting AOE can feel like journeying through the past. That said, it isn't for everyone. But if you've got a knack for appreciating timeless classics that has you planning turns for hundreds of hours, you should definitely take a gander at this Xbox offer.

Nowadays, the look and feel of a brand-new title can either make or break a game. With this in mind, the developers at Forgotten Empires, Tantalus Media and Wicked Witch made sure to give the Definitive Edition another major facelift for today's audience.

It's hard for newer players to get into the retro scene, so the developers added as much polish as they could to prepare the title for next-gen consoles. Along with 4K Ultra High graphics and a remastered soundtrack, your thought-out skirmishes in Age of Empires 2: Definitive Edition's console version will feel crisp for the new generation. 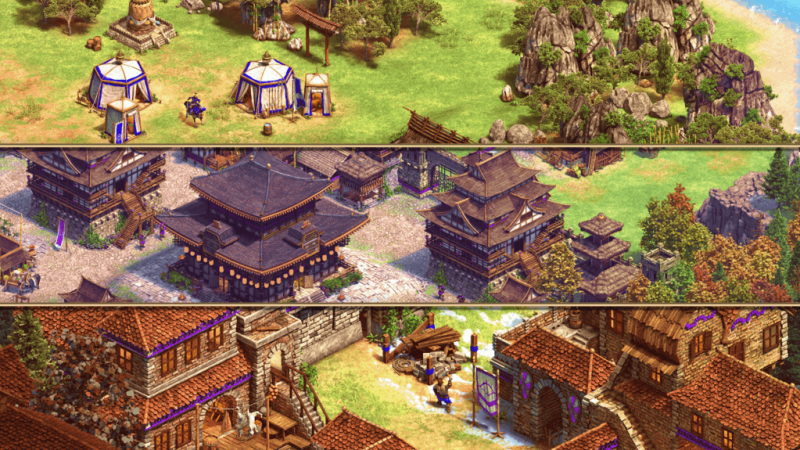 As it's Steam page lays out, AOE 2: DE is still getting brand new updates to keep things interesting after 20+ years.

Age of Empires 2's base campaign having days worth of playable content is bang enough for your buck, but the Definitive Edition also comes with a complete list of pre-released game updates and game modes. In-game events are being held to this day. Knowing that the game has been out since 1999, that's saying a lot. Here's a list of major updates you can expect to see in AOE 2's console debut:

This playground of exciting challenges will definitely make the 2019 remaster a high-value addition to your Xbox library.

A Massive DLC Is Available for Free

Among the title's latest expansions is "The Last Khans", a DLC that introduces four new civilizations and 3 starting campaigns that stretches across medieval Central Asia and Eastern Europe.

"The Last Khans" tells the story of Kotyan of Cumania, a Khan that raises the banners to unite the tribes against the Mongol Empire's invasion at the height of Genghis Khan's rule.

The Definitive Edition also offers 3 other DLC expansions with considerable playtime. With the technological limits of yesteryear being surpassed, the in-game world stretches past its original constraints with bigger and better expansions, with the last one releasing just this year. Available for play are the following:

Age of Empires 2: Definitive Edition will be playable on the Xbox Series X and S on January 31, 2023.