Fortnite is facing a glitchpocalypse with the Shockwave Hammer vaulted along with Hurdling, and Deku's Smash.

Fortnite Chapter 4 kicked off a bit early, hitting in December with a whole batch of new content for players. It hasn’t gone entirely smoothly though. Recently, we’ve learnt of the Shockwave Hammer vaulted along with other substantial features in the Chapter, leaving fans wondering what’s actually left of the mechanics?

Fortnite’s fourth chapter first season has been dominated by the Shockwave Hammer. That’s an OP weapon that sits on the top of the Fortnite Chapter 4 weapons tier list. It’s gone though, in news that might come as a welcome surprise to some players. On top of that, hurdling has had to leave the game for a while along with one of the more fun Fortnite Mythics we’ve had in a while. So just what’s left of Fortnite Chapter 4 and why are we seeing some much of the content getting removed lately? This week Fortnite has vaulted yet another item. This time it’s the Shockwave Hammer. This item has been killing it this season. Most last circles in Zero Builds have just been a handful of players leaping around with hammers until someone lands the smash to finish the game off. It’s been fun. Although, also kind of a problem for those who like a balanced game.

The Hammer recently had an exploit discovered where players could grab themselves infinite uses of its secondary rotation use. Although, the glitch wasn’t really that much more powerful than its normal use. Players had been utilizing more than one Hammer at once. This lets them avoid the cooldown. By the time one hammer has used its charges, the other has pretty much recharged at this point.

The exploits with the hammer went unaddressed by Epic, although they haven’t been around to do patches. Now that Epic is back we’ve seen the Shockwave Hammer vaulted from all playlists. Epic didn’t disclose why the Hammer had been removed. It might be because of the exploit, or it could just be because it’s come to completely dominate the meta. In any case, it’s disabled for the time being.

The Shockwave Hammer vaulted isn’t the only Chapter 4 addition that’s been removed, hurdling is gone too. This was a new mechanic added In. When players run at a low barrier, they’ll now hurdle over it. It isn’t as key of a mechanic as sprinting or climbing. However, it was the headline mobility addition of Fortnite Chapter 4. It’s one of just a few other mobility options that were missing.

Hurdling has been disabled in the game since mid-December. One of the longer vaultings thanks to the abundance of bugs in Fortnite right now. It’s a change that seemed to go surprisingly unnoticed in the game. Not that many players make such regular use of the mechanic to really miss it. Another key feature being disabled this fresh in the season is another knock for the current Fortnite Chapter though.

Deku’s Mythic – Will it Ever be Back? The next major glitch and vaulting of Fortnite Chapter 4 is the Deku Mythic. This was added in with the Fortnite X My Hero Academia update. It’s a Mythic that recreates Deku’s signature attack in the show. In Fortnite, it does pretty heavy damage to players and their surroundings.

It was basically a one-hit kill. Although, it was also barely in the game before we got it vaulted once again.

This one had a bit stranger of a reaction than with the Shockwave Hammer vaulted. Largely because we don’t know if it’s coming back. Presumably, it will return for a little while so we can get a better look at this impressive new Mythic. Although, the crossover it was a part of is essentially over. Will Epic bring skins to the Item Shop for longer to coincide with it coming back? This one might be missing for a while if it ever comes back.

Kind of like the news of Shockwave Hammer vaulted, there’s a mixed reaction here. The Deku Mythic wasn’t the most well-liked. It wasn’t high skill and it did heavy damage in the game. This one wasn’t too popular so players might not be missing it too much.

Why Have Fortnite Chapter 4’s New Features All Been Vaulted? 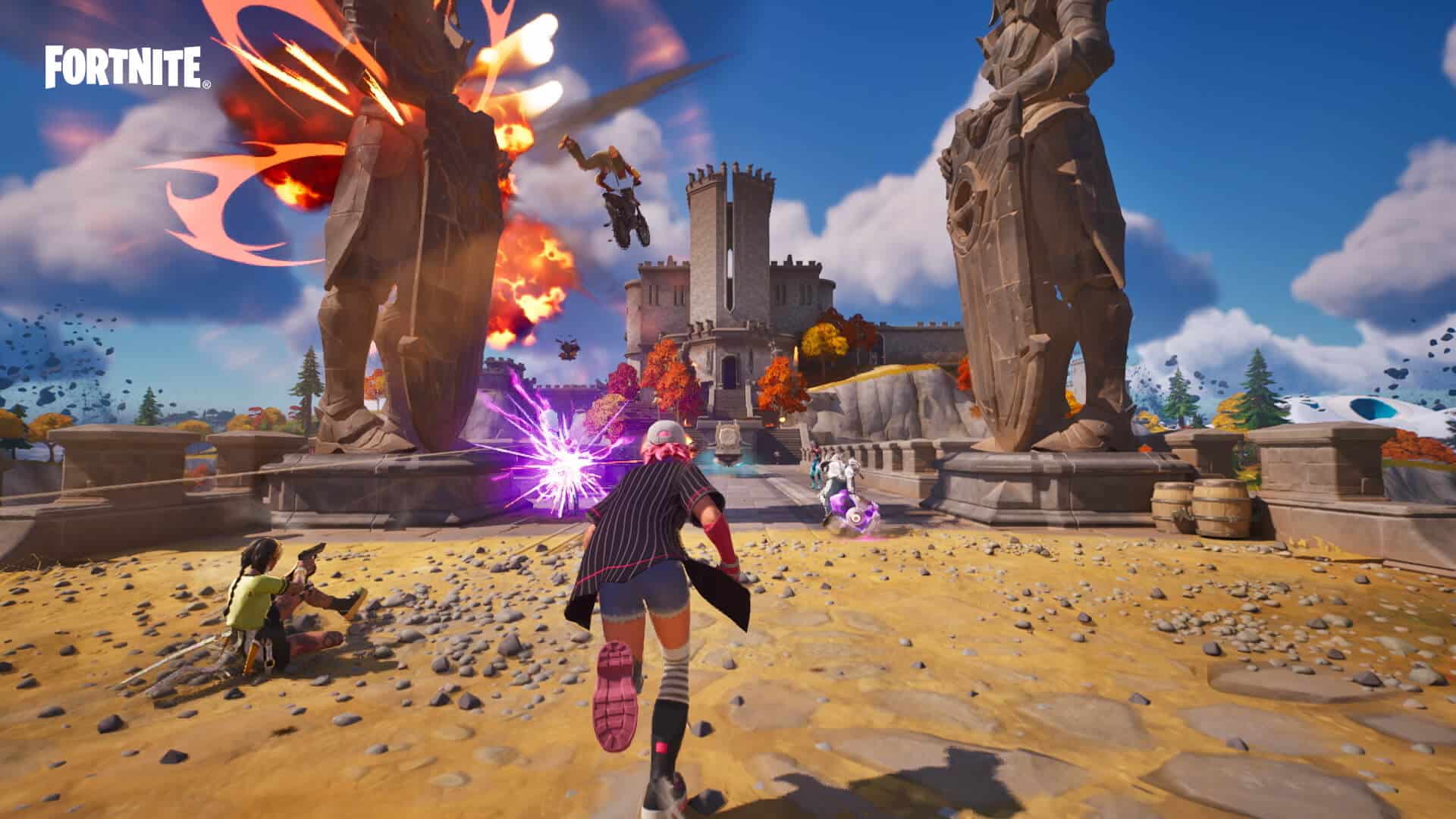 All these new additions have been vaulted across Fortnite Chapter 4. It isn’t everything new that’s gone through. We’ve got the new weapons, the brand-new map, and the Fortnite Augments are all working great! It is a bit embarrassing to have so many new features missing though.

Often, items are vaulted for a substantial amount of time in Fortnite. The launchpad was missing for a long stretch thanks to a bug. Individual items come and go all the time. There’s a clearer reason why we’ve got so much broken at once though. Despite getting some new content like the Guardian Shield and new Fortnite Chapter 4 Weekly Quests, we haven’t gotten a full update. This is all queued content.

Epic updates Fortnite very regularly, on Tuesdays. Even in the dying days of the season we often get big patches with themed weeks. However, there are two periods where Epic doesn’t actively update the game. They take a brief break over the Holidays, and then another one in the summer. Less than a month in a year by some reports. It’s a pretty good schedule and few games can match Fortnite for the sheer number of fresh updates it gets. These breaks are why so many glitches have hung around though.

Epic has been out on their holiday break for the last few weeks. The recent vaultings outside of the hurdling have mainly occurred since the developers left for this break. We can likely expect some of them to get fixed over the next weeks as Epic returns to their normal patch schedule. Deku’s Mythic might be an unknown but we can expect the rest of the Fortnite Chapter 4 items to pop back up over the next weeks.

Between a brief break and the Chapter getting dropped so suddenly after a very short Chapter 3, there are bound to be some problems right now. There are loads of glitches. Some have been around even longer, like randomly not being able to sprint in random games. More is broken right now than there typically is after Epic’s break.

Usually, Fortnite is back in a decent state within a patch or two. Although, with content creators raging at the constant glitches and players having sometimes only days to use a fun new weapon, it’s a frustrating time for the Battle Royale.