The PUBG Mobile 2023 Esports roadmap has just been unveiled, giving us the entire schedule for the year’s pro events.

PUBG Mobile is one of the biggest mobile esports, arguably eclipsing its PC and Console alternative. Its competitive scene is getting a big update with the PUBG Mobile 2023 esports roadmap. We’ve gotten the full details for the entire spread of upcoming events. There’s been some changes made this year too, both to the LANs and even to the scoring system which makes for big changes to the meta.

The PUBG Mobile 2023 esports roadmap is showing off the international LAN events that the entire system is being built around. However, we’re also getting a new points system which should spice things up. Tencent has unveiled the entire spread of esports events planned for this year. This is what’s coming. 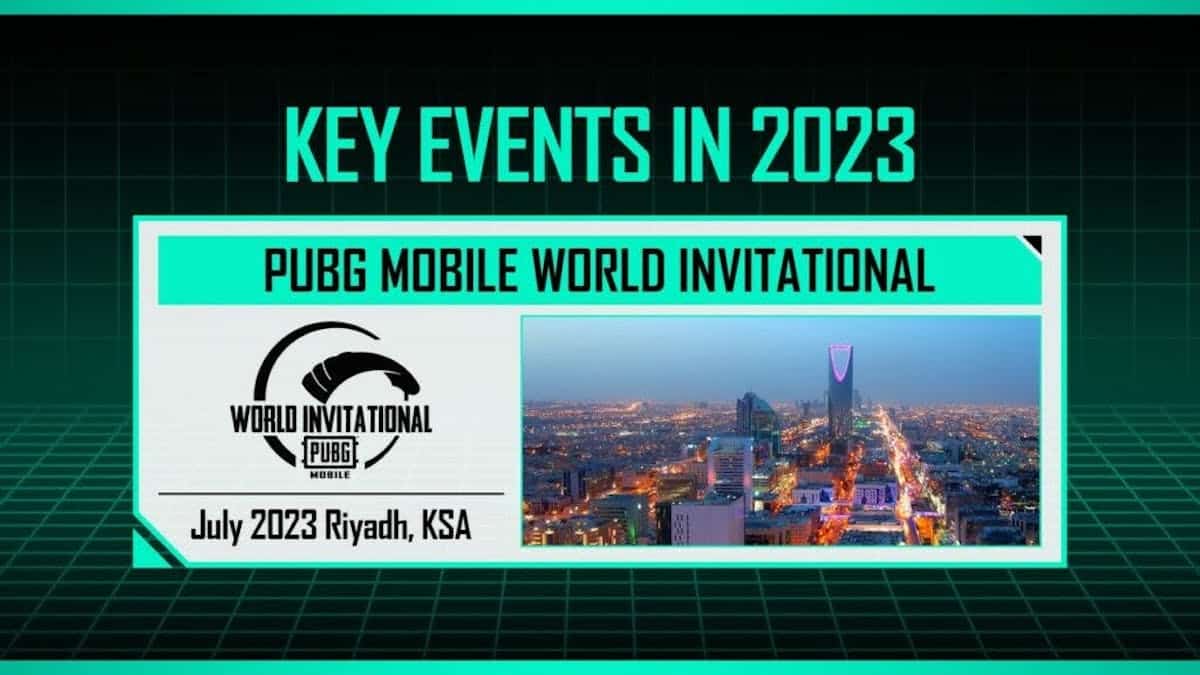 The PUBG Mobile 2023 esports roadmap has been posted this week, with the conclusion of the PUBG Mobile Global Championship 2022. As that event closes up the previous season, we’re getting our first looks at what’s coming next.

2022 saw 13 PMPLs take place in five different regions. These lead into international LAN events held this year in Saudi Arabia and Indonesia. A full 600,000 teams competed through the entire year. However, things are switching a bit for the next season.

2023 will have two major invitationals underpinning the entire competitive scene. These are the big tentpole events played on LAN with players from the entire world taking part here. These will be the PUBG Mobile World Invitational, or PMWI, and the PUBG Mobile Global Championship, or PMGC.

This is the first time that an International PUBG event has been held here. There’s also a major change to the timing. Tencent is slightly shortening the season. The 2023 season will now conclude in 2023 proper!

Previous years saw the end event take place in January of the following year. This time it’s going to take place in the actual year. This will help to simplify things for viewers trying to follow it all.

Those are the two key events for the year. There’s another major change coming though. There will also be two events held as part of international competitions. The 32nd SEA Games in Cambodia are going to be held from may 5 to 17. They’ll have a PUBG Mobile event held there! The Asian Games in Hangzhou China will also have one, from September 23 to October 8. These two events are both being sanctioned by the international Olympic Committee. This definitely elevates these tournaments and puts PUBG Mobile at the forefront of mobile competitive gaming. It’s a fun bit of variety on the PUBG Mobile 2023 esports roadmap. 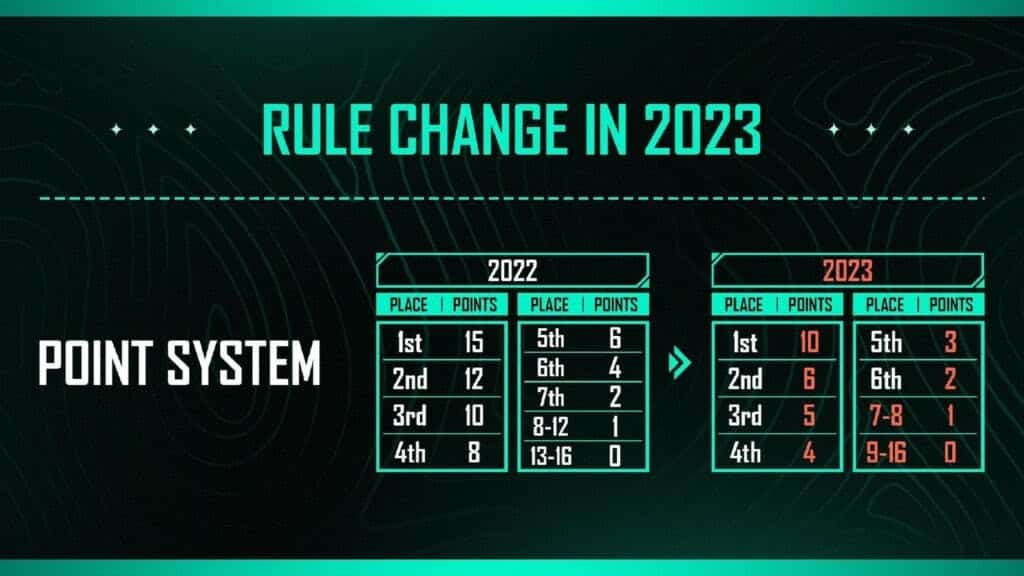 One other big change is coming along with the new Invitational events. There’s a shake-up coming to the point system which is going to make things different for all of the teams competing. It’s going to split focus on the game between placement and kills in a bit more kill-focused way.

This is how it’s changed. In 2022, point scoring broke down like this.

This is how the new system is going to work:

This is a significant downgrade to the points earnt in the game from placement. There are still some decent prizes if you manage to finish in the higher end. However, unless you really land highly in placement, the points aren’t going to flow. Instead, players will need to focus on grabbing kills. This is going to contribute a lot more to your score than finishing highly.

The change with the PUBG Mobile 2023 esports roadmap will push players to be more aggressive. In the past, other Battle Royales like Fortnite have also adjusted how their ranking system works to similarly push more aggressive play. It has often resulted in much more entertaining esports action to watch.

The PMPL is getting a bit of a turnaround with the resent season. Malaysia is being added into the game as a new region in the PMPL. With Malaysia, Indonesia, Thailand, and Vietnam all hosting separate PMPL events.

With so many regions now competing in this area of the world, there’s a new challenge coming back to the game. The SEA Wildcard is going to be making an appearance on this year’s schedule. This is a tournament between the remaining SEA countries. The Philippines, Cambodia, Myanmar, and Singapore will all be part of the event.

While talking about the changes for the upcoming season, we got more news on how things are getting reorganized for the entire competitive ecosystem. James Yang, the director of PUBG Mobile Global Esports, has discussed one big one. They’re trying to change the ecosystem to better support National events like PMNC, PMCOs, and third-party tournaments. These will all be part of the PMPL Qualifier, with the best teams moving ahead in 2024. 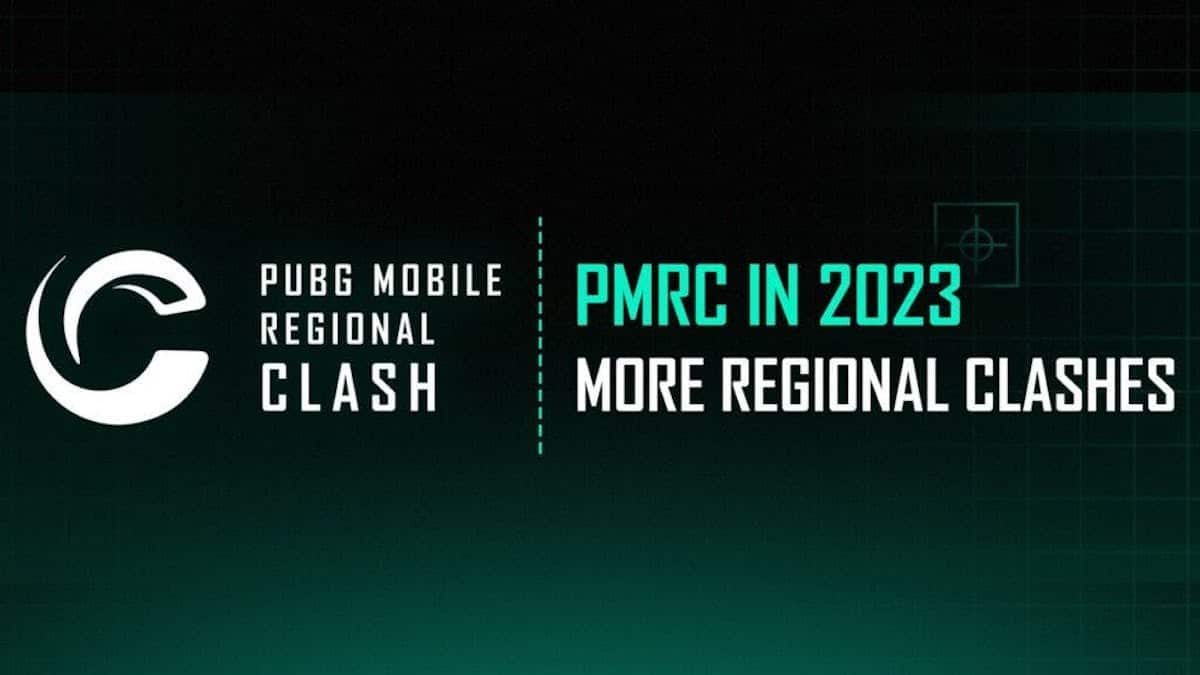 Tencent is also bringing back a tournament with the PUBG Mobile 2023 esports roadmap. The Regional Clash is returning again this year. This was held last September, but more is coming this year. Last season saw a direct tournament between SEA and China. However, we’re getting more of these regional events in 2023.

Various regions will be competing in the same format here. This is going to let us see more match-ups between regions outside of the big invitational LANs.

All of this spread of events are going to be kicking off across 2023 in PUBG Mobile.