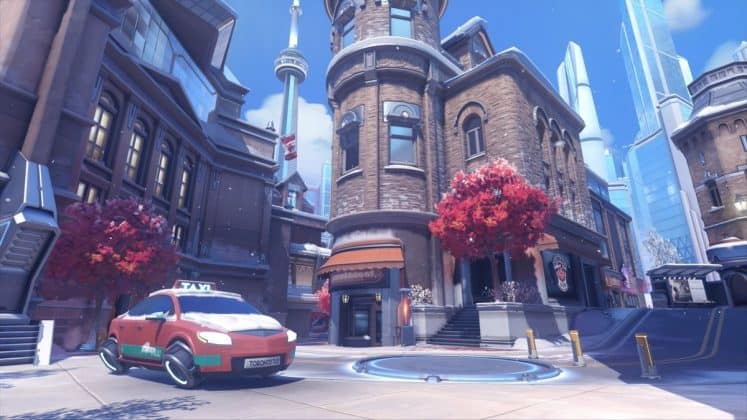 Get a first look at Overwatch 2's new maps!

Canadians finally get their own map with Toronto, first introduced during Blizzcon 2019. This map showcases a futuristic version of Toronto, with a Toronto Maple Leafs’ statue in front of the city skyline. Popular places also appear, such as the CN Tower and Nathan Philips Square. The Toronto map features daily life elements, like the streetcars or a subway map if you get lost.

Weather the Toronto winter in Overwatch 2

Toronto will be dedicated to the new game mode of Overwatch 2, Push. In this mode, two teams fight to take control of a robot that pushed a barricade over to the opponent’s spawn.

This map is also home to a new hero coming in Overwatch 2, Sojourn. And now we know that instead of going to Tim Hortons to get her coffee, Sojourn goes to its equivalent in Overwatch, Tim Fordsons.

New York City is a new map coming with Overwatch 2. It features many roads and shortcuts, as well as the city’s iconic architecture and yellow cabs. The New York map is filled with small stores and pizza shops, making the map feel lively and dynamic.

Enjoy a New York slice between battles in Overwatch 2.

This futuristic version of New York City will be a hybrid map, where players first need to take control of a point before escorting a payload. In this New York map, the payload is a firetruck called Engine 11.

Lucio is taking us to his home with this new Overwatch 2 map, Rio de Janeiro. The city has colorful architecture, and Lucio will be able to wallride through various buildings, shops, and even the Mayor’s office.

Rock to that Rio rhythm in Overwatch 2.

Just like New York City, Rio de Janeiro is a hybrid map. The new Rio map features a fancy payload, which could join the carnival anytime.

The Rio map will feature various small alleys, perfect for flanking heroes. Elements can also be destroyed as players get closer, giving a good hint about their position to the enemy team.

The Colosseum map is set in Rome, Italy. It features the romantic architecture of the city, with a futuristic twist dear to Overwatch players.

Roam the streets of Rome in Overwatch 2.

Rome is a Push map, with a “C” shape forcing players to battle for the control of the robot and its barricade. As the Push Mode is meant to be the most dynamic mode in Overwatch 2, you may only have little time to wonder at the Italian scenery.

If you are a fan of racing cars, this map is for you. Overwatch 2 brings the action to Monaco, with the Monte Carlo map. The action will take place during nighttime, with fancy buildings lit up in the night by many lights.

Race toward the Monte Carlo finish line in Overwatch 2.

Monte Carlo is an escort map, starting in a garage for F1 racing cars. According to Aaron Keller, Monte Carlo will be steeper and longer than any previous Overwatch maps. There is yet no information as if we can steal one of the racing cars to make it to the end of the map faster.

More maps should be coming to Overwatch 2, even if we haven’t seen them yet. Blizzard teased several new maps for Overwatch 2: Toronto, New York City, Rome, Rio de Janeiro, Gothenburg, Monte Carlo, and there are rumors about a map set in India and Poland.