Things get serious in week 2 of the LEC Spring Split with the Fnatic v Rogue Playoffs series.

Last week saw some great matches. With Rogue v Misfits, we had Rogue able to pick up the 3-1 win. The “Kings” took to the Rift as Fnatic faced off against G2, with Fnatic coming out on top. The last action of the weekend saw a 5-game series between Excel and Vitality. This week started with G2 taking down Vitality in a swift 3-0 series. Now our attention moves to the Upper Bracket Final between Fnatic and Rogue. 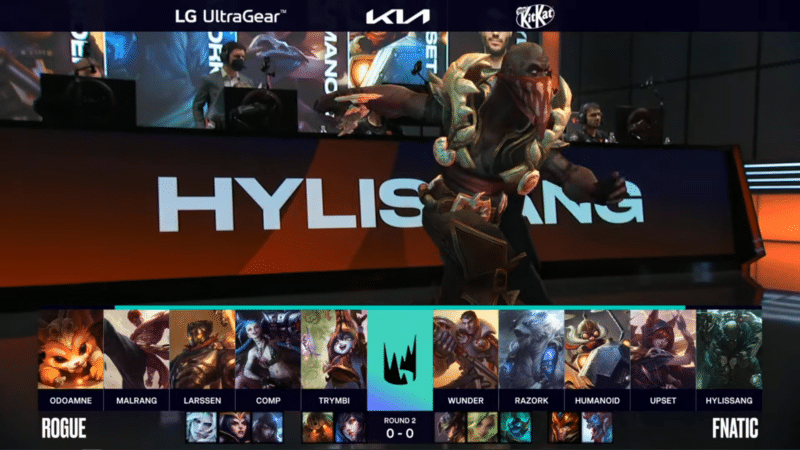 It's a first blood for RGE, though FNC was quickly able to trade one back. FNC quickly hit back with three kills, however, as RGE's early lead was wiped out. By the 15-minute mark, RGE would claw back into the series with the gold just 1k in advantage for FNC. They remained in the lead until a 5v5 around a potential Soul Drake for FNC. With RGE forced to take a fight, FNC was able to little down members of RGE winning 2-for-1 in the fight and claiming the Drake. FNC turned that into a Baron as they ballooned their lead to 5k. RGE make a final play to try to secure the Elder buff, which they managed to secure. With no one dying from RGE, they delay the end of this game. RGE once again pulled off a game-saving play, this time stealing away a Baron from FNC.

At the next time of asking, FNC was able to secure the Elder, and it looked like they needed to end it quickly. With Baron back in play, FNC somehow once again found themselves on the wrong end of a fight. They lost two at the start of a Baron fight, they looked to have won it late on before RGE fought back. With just two members left, RGE couldn't do the Baron as the game got tense. FNC once again took the Elder Drake, with RGE forced to take the Baron. RGE couldn't escape, with FNC chasing them down, it was advantage FNC in the series. 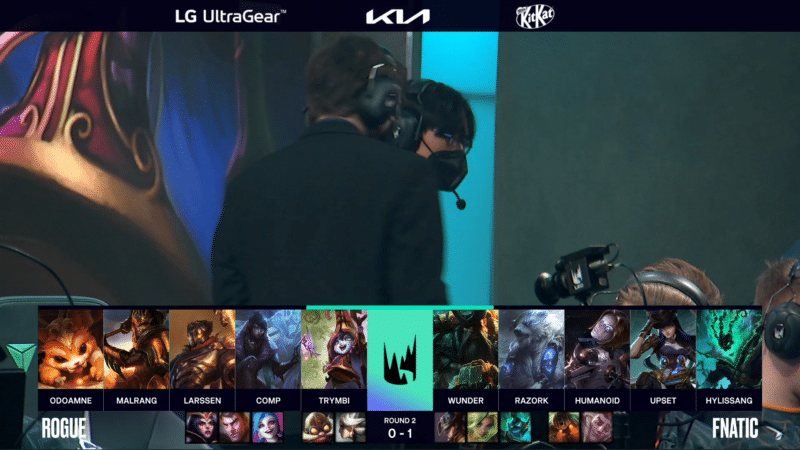 FNC pick up first blood as they secure an early lead. FNC refused to take their foot off the gas as they moved even further ahead. With just 10-minutes on the clock, they'd secured a 3k lead. Despite that, RGE managed to pick up a few key kills as waves crashed against their towers, with RGE equalizing the lead. RGE continued to find winning fights, this time in the top side as secured a gold lead. The first 5v5 team fight went the way of FNC as like in Game 1 they excel when it comes to fighting as a team. FNC secured Baron off the back of it as they moved ahead. Another fight saw FNC push their lead, with RGE's base now open.

Despite RGE attempting to ambush FNC, they just lacked enough damage, as it was FNC that won the fight. It was enough for them to secure a Game 2 victory, as they moved to match point. 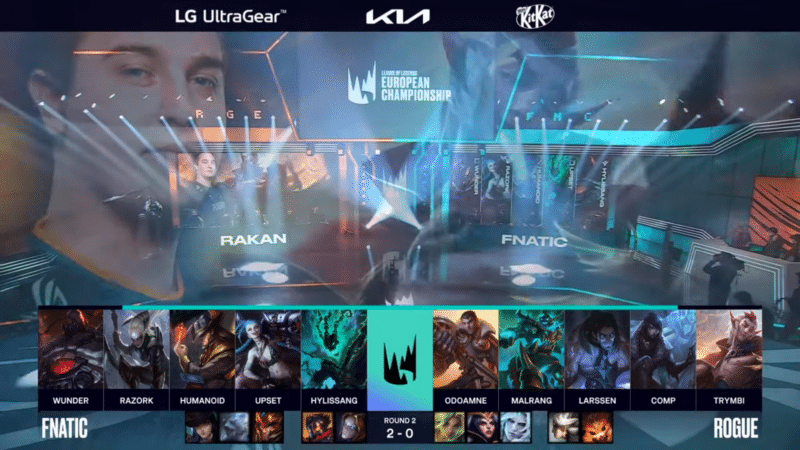 Game 3 was a first blood for RGE, though sadly for them FNC did turn it back later. Said fight would see the score ended 2-3 in RGE's favor. In the decisive game of the series, RGE got a crucial early lead. Though we've been here before in this series, a throw this time would spell the end. RGE maintained their 3k lead into the 20-minute mark, with 1 drake a piece. RGE forced a Baron engagement and FNC fell for the bait. All five members of FNC dropped, with RGE taking the Baron. RGE got too keen with the Baron, while they took a FNC inhibitor they lost four members. Once again, RGE had let FNC back into the game.

Baron was secured by RGE without contest from FNC, and this time it was enough for them to secure a victory. However, not for the first time this Game, RGE overextended and FNC punished them, taking down four members of RGE. RGE came back to the base after the reset and this time they did manage to win the game. The series moved into Game 4 but it was clear that RGE needed to clean up their game. 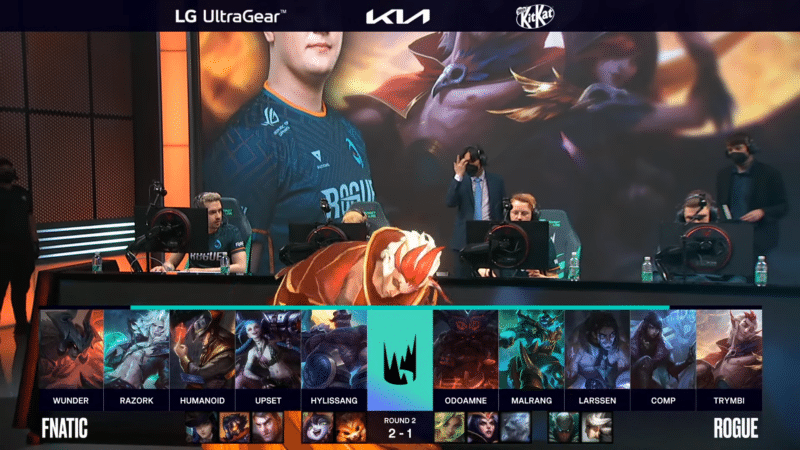 A huge level 1 gank from FNC is countered, as RGE picked up an early lead. RGE turned that into three more kills as they looked to turn the series on its head. FNC saw a complete breakdown, dropping five more kills as RGE went 0-11 by the 9-minute mark. Three minutes later, FNC had found a kill, but it looked all but over for FNC in Game 4. A 16-minute 5v5 would see RGE ace FNC as they had more kills than minutes in the game. With an 11k lead this early, we prepare for a Game 5. RGE picked up Baron on spawn and with a 16k lead, they looked to end. RGE did manage to close out the game as the series went to a 5th and final game. 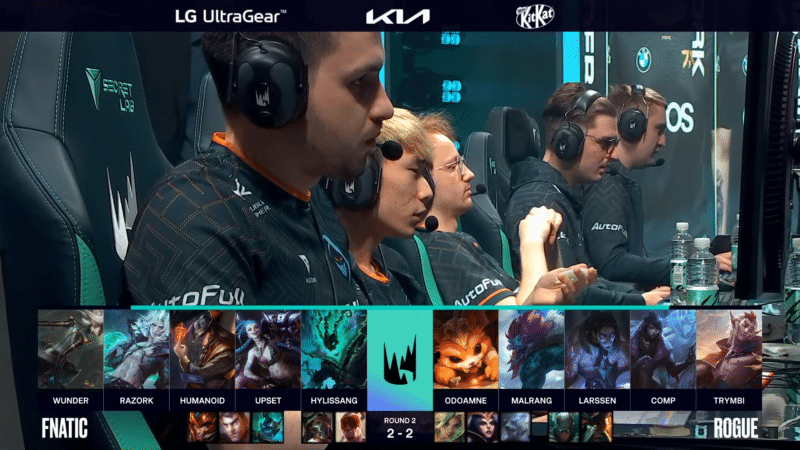 First blood for RGE, after a misplay by Humanoid saw him in the wrong place at the wrong time. FNC went for an all-in play on the bottom side but it's a 1-for-1 share in RGE's favor. Despite RGE having the early pressure, they only help a 400g lead. With RGE still ahead, FNC looked to secure Drake pressure early, as they plan for the late game. It wasn't to be, as a chaotic fight on the bot side went FNC's way, however, they lost too much pushing for one kill that RGE secured Drake. RGE looked to have caught FNC out in their own jungle, but FNC had the damage to keep the fight level at first. After looking like they'd won it, RGE ended up taking the fight 2-for-4 as they moved to Baron.

With Baron, RGE tore into the FNC base as they pinned FNC into their Nexus. FNC tried to snipe a kill but they lacked the damage as RGE overturned a 0-2 start to take down FNC. RGE will now secure a Grand Final spot, while FNC must play through the Lower Bracket.