The once highly anticipated duo of Benjy "benjyfishy" Fish and Kyle "Mongraal" Jackson has seemingly come to an end. After linking up back in Season X, benjyfishy and Mongraal parted ways with their respective duo partners Martin "MrSavage" Foss Andersen and Dmitri "mitr0" Van de Vrie. The two had a synergy unlike any other during the Season X. Competitive Fortnite fans were brimming with anticipation once the mega powers of Benjy and Mongraal joined forces.

Unfortunately, the two struggled to maintain consistency through their partnership. It seems that Benjy and Mongraal's lack of success in the recent FNCS competition and failure to reach the Grand Finals may have been the last straw. Both Benjy and Mongraal are competing with different teammates in today's EU Contenders Cash Cup. This parting of ways seems to have sparked numerous others throughout the European competitive Fortnite scene.

The Return of Benjyfishy and MrSavage

ESTNN recently published a story regarding the potential return of MrSavage and benjyfishy as a duo. MrSavage recently spoke publicly about his split with Benjy and all that transpired afterward. Professional Fortnite fans around the globe were hit with a familiar site as they loaded the Duo Cash Cup standings earlier. The tandem of 100 MrSavage and NRG benjyfishy are officially competing together after parting ways back in Season X. It’s been ten months and three seasons since these two last played together. Although neither player streamed the Cash Cup competition, professional player Ghost Issa confirmed that MrSavage and Benjy are officially back as a duo. 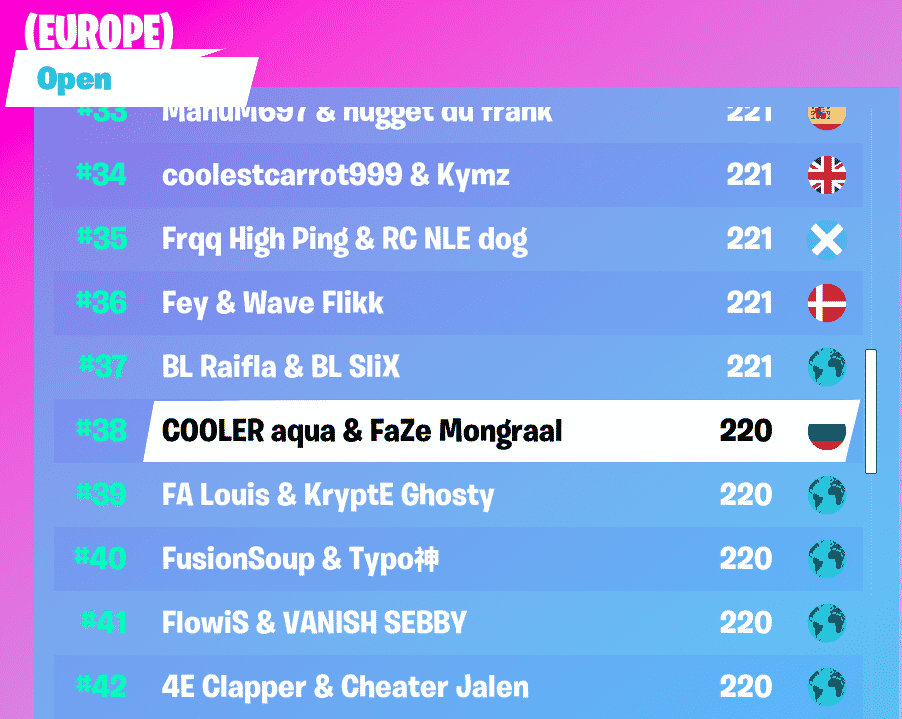 The site of these two names brings back memories from the Season X FNCS tournament. During one of the qualifying weeks, Mongraal notably had some choice words for World Champion David "aqua" Wang before eliminating him. It now seems that Mongraal has gravitated toward aqua after splitting with Benjy. It's a strange choice considering aqua and former duo partner Klaus "Stompy" Konstanzer performed well as a pair. Nonetheless, the combination of aqua and Mongraal features two of the best European pros. Hopefully, Mongraal will find some success with aqua as his teammate.

After splitting with LetsHe, Excel Esports' newest member, Wolfiez, searched for a new duo partner. Fortunately for the Duo World Cup runner-up, Endretta's split with MrSavage worked in his favor. The duo of Wolfiez and Endretta competed in the Contenders Cash Cup today with unfortunate results. We cannot confirm if Wolfiez and Endretta will continue teaming or not. We've seen in the past that team changes often occur in Fortnite. Regardless, Wolfiez and Endretta is a tandem of talent worth looking out for should they find success.

Although we can't be sure that any of these duos will stick together, it's a massive development in the European scene. Many have been longing for the return of MrSavage and benjyfishy. Little did we know, other potentially ground-breaking duos would follow as a result. We'll have to see how these duo changes affect each player. Only then will the community know if these duos will stand pat or change yet again.