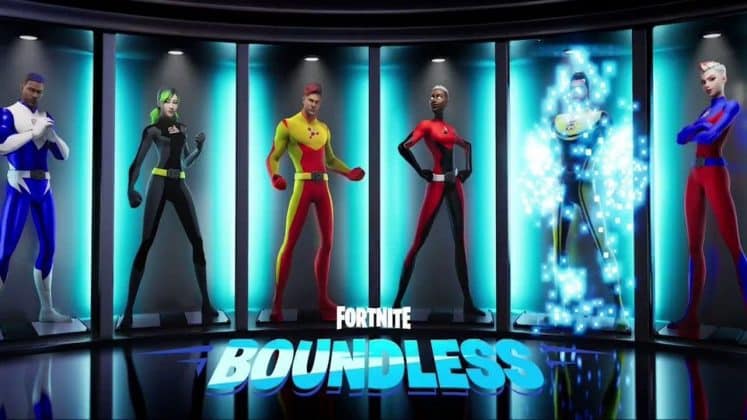 Epic Games will restrict all-black and all-white options for the controversial superhero skins.

Fortnite Battle Royale has a strange history of occasionally offering ‘pay-to-win' cosmetics and items unknowingly. It's almost a certainty that players within the community will find a way to exploit the developers' missteps when possible. Last year, a noteworthy occurrence took place when professional player Dmitri “mitr0” Van de Vrie and his duo partner discovered that a Star Wars pickaxe silenced footsteps when equipped. Fast-forward three seasons and similar issues continue to plague the Fortnite scene.

September 10, 2020, marked the debut of perhaps the most ‘sweaty' Fortnite skin the community has seen since Aura or Dynamo. The Boundless set offered players the chance to customize a superhero skin to their liking. A popular combination, primarily in the competitive scene, was a full white or black bodysuit. Some users on Fortnite's primary subreddit discovered that the players could exploit shadows with the all-black version. After some investigation, Epic Games deemed this a valid concern. And so they will adjust the skin accordingly to eliminate the underlying issue.

Starting next update you can no longer use black on black or white on white superhero skin colors combination due to people exploiting it, you will be able to refund them for free tho!

Famed Fortnite leaker HYPEX took to Twitter with news regarding Epic's decision to remove entirely black and white ‘Boundless' skin combinations. Fortnite's next update will restrict this option for holders of the superhero set, ensuring that players can no longer exploit shadows. HYPEX wrote, “Starting next update you can no longer use black on black or white on white superhero skin colors combination due to people exploiting it, you will be able to refund them for free tho!”

It's undoubtedly a heartbreaking revelation for those who abused the shadow exploit. It was not uncommon for any Fortnite players to see the black on black and white on white skins running around in a given game. The issue significantly affected console players, who can't turn off shadows as PC counterparts can. Epic's decision should blanket the problem entirely. And those who aren't happy with the change can refund their Boundless purchase for free. Here is Epic's take on the situation, which you can find on Fortnite's Trello board:

“It was brought to our attention that Outfits in the Boundless Set included color combinations that could compromise the competitive integrity of matches. As a result, we're planning to make minor cosmetic adjustments in our next update. We've made some adjustments to the materials, and you will no longer be able to have white/white or black/black color combinations when selecting your primary and secondary colors.

If you are no longer satisfied with your purchase, you can request a refund anytime within 30 days of your first login after the 15.30 update (no refund token required).

We've also made some tweaks to interior lighting in the game to [sic] compliment these changes. Thanks for the continued feedback.”