Fortnite: How To Mark Weapons Of Different Rarities In Season 6 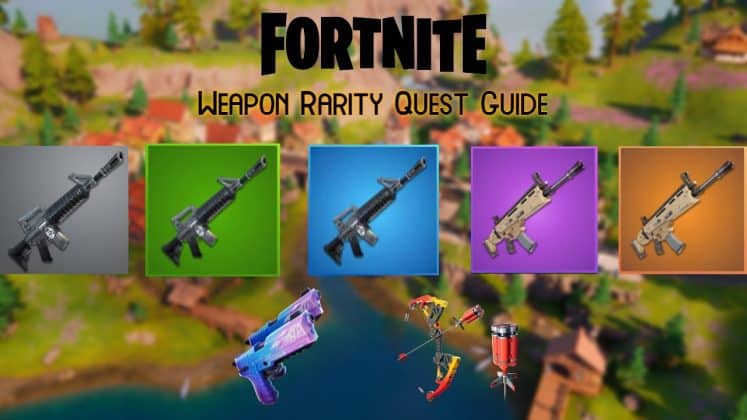 A new quest has emerged in Fortnite Chapter 2 – Season 6, which tasks players with marking different weapon rarities. This concept might confuse those who are not aware of the various weapon grades that exist this season. Some weapon rarities are more accessible than others. There’s a lot to analyze as players begin their journey to complete this Epic quest, so let’s take a look at weapon rarities and develop a strategy worth following.

Chapter 2 – Season 6 features seven rarities in total, and here is a quick rundown of those:

As you may expect, Common, Uncommon and Rare weapons are the easiest to find in any given match. These typically spawn as floor loot or in regular chests. The best route to take in this regard is to queue into a Team Rumble match and land at any point of interest (POI) with plenty of loot. Since players can respawn in this game mode, it’s much easier to knock out the first few rarities, at least.

Once landing, you should scan the area for a Common, Uncommon and Rare weapon and mark them by either using left on the directional pad (D-Pad) on a controller or clicking your mouse’s scroll-wheel under default settings. With the three painless weapon rarities out of the way, we will move on to this quest’s more challenging task.

Also Read: Where to Find Island Soccer Players in Season 6

The less strenuous of those four options is the last, since finding a Rare weapon is not too tricky and upgrading costs minimal Gold.

The last two rarities are relatively straightforward when breaking them down. Three Exotic weapons and one item withstood the transition from Season 5 to Season 6, and those are The Dub, Hop Rock Dualies, Shadow Tracker and Chug Cannon. Epic Games also recently added the Unstable Bow. Epic recently identified an issue marking the Chug Canon, but they are currently working on a fix. You can purchase, drop and mark one of the other four items from NPCs at the following locations:

With Exotics out of the way, we turn to Mythics, which are arguably the most challenging. There are only two Mythic weapons available in Season 6, one being the new Explosive Bow, which we covered extensively in a previous article. Obtaining it requires you to drop at The Spire, eliminate Raz and mark the weapon that he drops. A Mythic Goldfish is also an option, but there is a one in a million chances of finding it, so definitely not reliable.

That covers all you need to know about one of Fortnite’s latest Epic quests. Completing it yields 24k XP. Be sure to finish the quest and move closer to the high Battle Pass rewards.