Which trios triumphed in the FNCS Warmup competition?

Fortnite Champion Series (FNCS) Chapter 2 - Season 4 is officially underway after a three-day warmup tournament for all teams ranked in the Champion Division. This season is the first to feature the trios format since the first since back in Season X. The landscape of competitive Fortnite is much different nowadays. Each season since then provided an entirely different meta for players to understand.

Additionally, players are much better than we have seen in the past. This season could very well produce one of the best FNCS competitions of all time.

The FNCS Warmup competition gives Fortnite fans an idea of who to keep an eye out for as we move closer to the first week of qualifiers. For those unaware, the FNCS this season will feature two split sessions for the Grand Finals totaling 12 matches. As a result, scores will be much higher than in past seasons.

Thanks to Kinch Analytics — competitive Fortnite fans have a cumulative leaderboard that provides insight into how all finalists performed. Let's take a look at how each competitive region played out in the FNCS Warmup.

Stark Industries extraordinaire FaZe Mongraal, Liquid mitr0 and E11 TaySon dominated the EU FNCS Warmup and it was not close. Across the final two sessions and 12 matches of the Grand Finals, MMT accumulated an astounding 223 points. Their day one performance yielded 145 points, which no other trio could catch. Mongraal, mitr0 and TaySon combined for one victory Royale and 80 eliminations overall.

Flikk, BL Anas and Gamma Th0masHD finished in second place with 190 points. This team came into FNCS Chapter 2 - Season 4 with a lot of hype behind them, and it looks warranted. Flikk, Anas and Th0masHD managed 102 points in the second session of the Grand Finals - which was the most of any other trio. Unfortunately, their 55 eliminations paled in comparison to Mongraal, mitr0 and TaySon's clinic. The European region will be a treat to watch this season.

Controller players illest and Furious joined former NA West player Liquid Riversan in achieving their first victory as a trio during this FNCS season. These three players eclipsed 100 points in both sessions in the Grand Finals - with 155 one day one and 114 on day two. Furious, illest and Riversan amassed 269 points overall and won by more than 100 points. Their combined 89 eliminations and three Victory Royales led all trios in the NA East Grand Finals.

The underrated triad of chaotic, BBG Haz and paper finished in second place after three rigorous competition days. All three players struggled to find a suitable trio, but this combination of players seemed to work this weekend. Haz, chaotic and paper accumulated 158 points and 53 eliminations. Despite not earning a Victory Royale - this trio stayed consistent with 84 points on day one and 74 points on day two. The complete XSET trio of Shark, Knight and Av took third place with 148 points.

Multiple-time Fortnite Champions 100T Arkhram and NRG EpikWhale substituted EpikClosrlol in for 100T rehx for the FNCS Warmup. These three dominated the NA West region without missing a beat. Across 12 matches in the Grand Finals - Arkhram, EpikWhale and Closr managed 262 points. This temporary trio compiled 83 eliminations and a mind-boggling five Victory Royales. It does not come as much of a surprise, considering Arkhram and EpikWhale are two of NA West’s best players. Now imagine how much better they’ll be with rehx.

Mony, NorCal toff and Season X Champion jayrosez finished in second place with 190 points. They managed back-to-back 95-point performances and one Victory Royale. It will be interesting to see if anyone can content with Arkhram, EpikWhale and rehx when the qualifiers begin. If any trio can do it - jayrosez, Mony and toff might have the best chance.

With 223 points — 9z Rustyk, VKS Seeyun and k1ng achieved victory in the South American FNCS Warmup. Some may recognize k1ng as the standout Fortnite World Cup player, who recently won FNCS Chapter 2 - Season 3. He is back again with talented teammates Rustyk and Seeyun. After a commanding 148 points on day one - k1ng, Rustyk and Seeyun followed with an additional 75 points on day two. This trio's four Victory Royales shows how dominant they were during this warmup tournament.

FNCS Chapter 2 - Season 3 Champion RNG Jynx, SRN alecc and PWR worthy produced an unprecedented performance in the Oceania region. The Aussies shredded their opponents to the tune of 312 points, 88 eliminations, and two Victory Royales. This dynamic also notably took second place in the final six matches of the Grand Finals. All other trios were merely fighting for second place after the execution exhibited by Jynx, alecc and worthy. 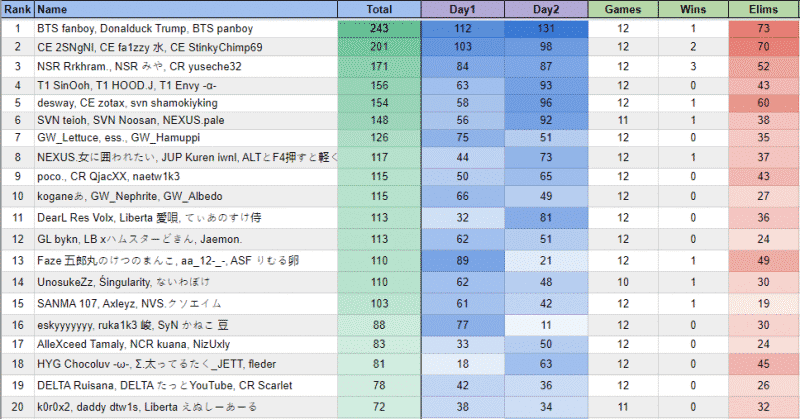 For the Asia region - BTS fanboy, Donalduck Trump and BTS panboy finished with 243 points overall. Their 73 eliminations led all other trios in the Grand Finals. After jumping out to a lead in session one - these three players kept their foot on the gas, not allowing any of their opponents to catch them. CE 2SNgNl, CE fa1zzy and CE StinkyChimp69 of Champion eSports took second place with 201 points and two Victory Royales.

Scytes Xavier, LND Linx and HVC Deatt ended the Middle East Grand Finals with 227 points. That performance was good enough for a 20-point victory. Second place finisher DNA Speedy, LND Heif and SAQR 7man made a run on day two of the finals but fell short in the end. The Middle East possesses some underrated players, so Fortnite fans should be in for some competitive FNCS Qualifiers this season.