ESTNN previews the NA East FNCS All-Star Showdown Solo Championship, where the region’s best players will compete for a share of $3M USD.

The stage is set for Fortnite’s best NA East players to square off in a six-match gauntlet in the FNCS All-Star Showdown. Ninety players earned the right to compete through their success over the past two Fortnite Champion Series events. Ten additional players won their way into the All-Star Showdown through last weekend’s Play-In tournament. What we have now is perhaps the most impressive collection of players in Fortnite history.

Epic Games put together some light-hearted skill competitions to kick off the event, but the real money and pride lie within the Solo Championship. All 100 players will queue into six matches and go head-to-head for their share of $3M USD. Realistically, every player has a chance to win, but a few have stood out amongst the pack. Today, ESTNN takes a look at the favorites, dark horses and contested players heading into the FNCS All-Star Showdown.

Here is a drop map for the NA East Finals, courtesy of @50taruns and @rtlpozed on Twitter. It wouldn’t be bold to suggest that there is chaos lurking at every location around the Chapter 2 - Season 7 landscape. All named points of interest (POIs) have more than one player landing, as do some less popular areas. Viewers and fans should keep in mind that split loot paths are always in play. Whether that’s against the rules or not is ultimately up to Epic, but we won’t know what collusion could be in store until the Solo Championship begins. 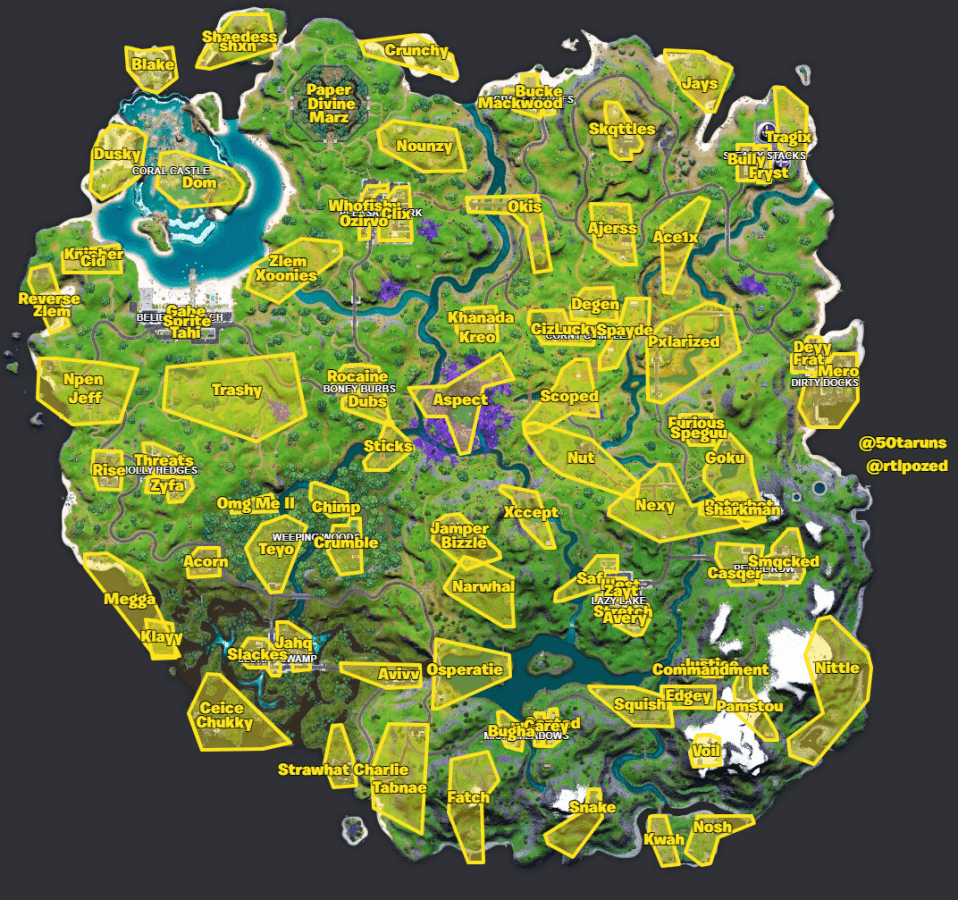 Team Liquid player STRETCH is arguably the consensus favorite to win the tournament. His solo track record speaks for itself; a DreamHack win, consistent success in Solo Cash Cups and a fourth in the recent UEFA 2020 Euro Cup (). STRETCH understands solo matches better than almost any other in the field. The only issues STRETCH may encounter are the four other outstanding players landing at Lazy Lake. Considering his recent fallout with Avery, the two could fight each other off the spawn.

If all goes according to plan, it’s hard to imagine STRETCH not being atop the leaderboard after six matches. He’ll obviously need some luck, but he possesses all the tools needed to reach end games and compile eliminations.

ENDL8SS player — Mero — is one-third of the reigning FNCS Champions and is perhaps the best controller player in the world. He’s improved immensely since breaking through on the competitive scene. Mero’s aim, building, piece control and game sense are unprecedented. What’s more, Mero has won a Solo Cash Cup, two FNCS tournaments and a Duo DreamHack event. With possibly an entire side of Dirty Docks to himself, Mero is in a prime position to win yet another major event.

Commandment of TSM FTX is on the short list of players who understand solo Fortnite matches, and can adapt no matter the season. His superb mechanics, game sense and aim allow him to effortlessly run through end games, where he shines the most. Commandment’s list of accomplishments include a runner-up solo DreamHack result, success in Solo Cash Cups and consistent FNCS placements. He’s never had a marquee victory that defines Fortnite’s best solo players, so this could be his moment.

Some players function much better in solo matches than any other format. That notion particularly applies to the controller elites such as XTRA Furious, who claimed the solo FNCS Invitational crown back in Chapter 2 - Season 2 when aim assist was absurd. Many used that fact against the outstanding solo player, but he proved his critics wrong by winning a DreamHack event five months later. Furious’ game seems built for these types of competitions. However, he’ll need to overcome an off-spawn adversary to reach the winner’s circle.

Like Furious, fellow XTRA teammate — Illest — fits the bill of what breeds success in solo tournaments. He is an insanely talented controller player with a career chock-full of Cash Cup triumphs and an eighth-place FNCS Chapter 2 - Season 3 finish. It’s unfortunate that Lazy Lake is such a logjam because that could factor against him. There’s no way to predict whether he’ll make it out in one piece or not. If he manages to, Illest is another player who is capable of winning the All-Star Showdown.

Why not make it a round of controller players for the dark horse section? Optimal Ambition player Whofishy consistently lurks on solo leaderboards but has not broken through just yet. He’s essentially done everything except winning a tournament outright. Some of Whofishy’s best results include high Solo Cash Cup finishes, a fourth in DreamHack Online and a seventh in FNCS Chapter 2 - Season 3. He may run into issues at Pleasant Park, where Clix and Ozirvo will also land, but he’s smart enough to avoid trouble and put himself in a position to win.

With 100 players and a relatively small map, there’s bound to be many spawn fights. Some individual players appear to be splitting their drops, which Epic could consider collusion in accordance with the rules. It’s challenging to decipher which players will fight each other off the spawn, but Lazy Lake appears to be relatively safe, despite having five players land there. Misty Meadows, Steamy Stacks and Pleasant Park look to be the most contested spots.

Each location has at least three players landing there. None of them seem committed to splitting loot. The Kami Split area located southeast of Dirty Docks could also produce some chaos, given how congested those areas appear. Contested drops and spawn fights will produce storylines without question. We’ll have to see who triumphs in these sticky situations as the players compete for a share of $3M USD.

The NA East region seldom fails to deliver on excitement. While solos often create frustration amongst players, these matches will be an absolute spectacle to watch. Refer to our viewing guide to see when you should tune into the action and earn Twitch Drops!