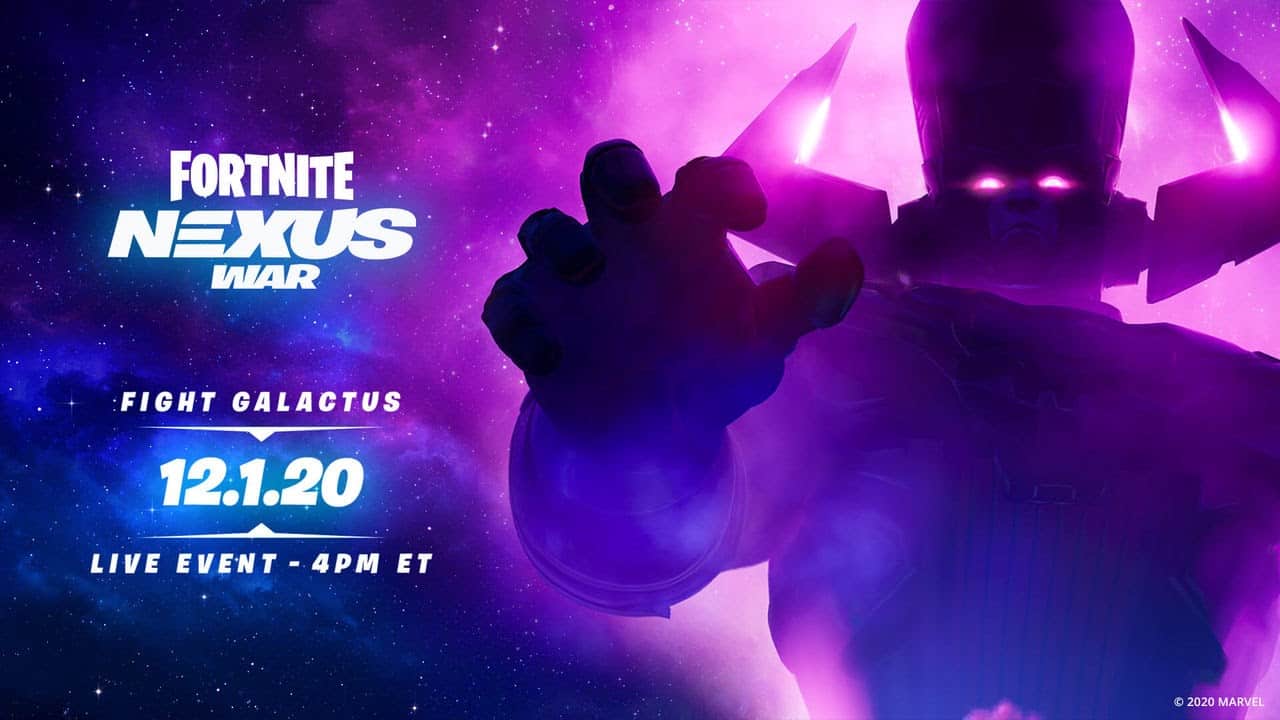 The Nexus War concludes on December 1.

Marvel Comics supervillain Galactus is on a collision course with Fortnite. Epic Games has worked in teasers throughout the entirety of Chapter 2 - Season 4. The current Marvel-themed season began on August 27, when multiple superheroes and villains such as Iron Man, Thor, Mystique and Doctor Doom invaded Fortnite's iconic map. The developers have set an end date for this season, which will take place on December 1. Galactus is looking to cause some chaos in the live event known as "Devourer of Worlds."

What is the Devourer of Worlds?

The Battle Bus is loaded and ready to go.

This is our final stand to save all Reality.

The Devourer of Worlds is the nickname given to Marvel supervillain Galactus and will also serve as the season-ending Fortnite event's name. Since the beginning of Chapter 2 - Season 4, players could spot Galactus in the sky as he flew slowly toward Fortnite's current map. His attack was inevitable, and the Marvel storyline this season will segue smoothly into Chapter 2 - Season 5. Some leaks have revealed more information about the Devourer of Worlds event, but none are tangible enough to believe. We know the event's name, the presence of a countdown timer in the Fortnite lobby and a general premise of what to expect.

"It was only a matter of time. Galactus is closing in on the Island and the fate of all Reality lies in the balance. Join the ultimate fight against Galactus in the one-time only Nexus War finale event on Tuesday, December 1 at 4 PM ET."

Many are teasing this season's finale as the largest to date. Unfortunately, not every player will have the option to experience it in full. Several players failed to queue into the last season-ending event, which took place at the end of Chapter 2 - Season 2. Epic Games is pulling out all the stops for this go-around, so you will not want to miss this event.

Make Sure You Queue in Early

Even Epic knows how much difficulty people have had in the past when watching these iconic in-game live events. The developers provided some tips and tricks on how you can secure a spot in the Devourer of Worlds event before it begins.

There are no guarantees when attempting to access live events. You will need to follow the instructions above to have a chance at experiencing Devourer of Worlds as it unfolds. More leaks will likely come through in the build-up to the finale of Chapter 2 - Season 4. Stay tuned to ESTNN for more updates as we approach December 1.

Fortnite: FaZe k1ng Will Relocate To NA East For Next FNCS

Fortnite: Should Snipers Be Removed From Competitive?