Clix and Deyy slay their way to victory.

Seven months ago, DreamHack committed over $1M USD to the competitive Fortnite scene with its Online Open tournament series announcement. Three of the game’s top regions – NA East, NA West and Europe – hosted monthly tournaments with $250K USD up for grabs overall. The Online Open began under the often polarizing solos format and switched to duos in October based on overwhelming player and community feedback. When offline tournaments weren’t possible, the community was thankful for DreamHack, who provided a platform for players to make a name for themselves and win money in the process. DreamHack’s final stretch of Fortnite tournaments has begun, and the NA East region was up to the task of delivering an exciting conclusion.

Several of Fortnite’s best duos across multiple countries battle over two heats and the semi-finals with hopes of reaching the Grand Finals. Only 50 teams remained when all was said and done. The star-studded finale featured Zayt, Benjyfishy, Bugha, Clix, Khanda, MackWood and numerous others, who went to war in eight decisive matches. With $15K USD on the line for first place, let’s take a look at how the final NA East DreamHack Duos tournament played out.

Also Read: Benjyfishy and MrSavage Split as a Trio, Could MMB Reunited?

Clix and Deyy Rally to Victory

NA East brought the heat in the region’s final DreamHack competition. The leaderboard changed hands often throughout the long-winded six-hour marathon. Heading into the final match, Degen and the newly signed Ajerss held the lead by only 20 points. However, popular Twitch streamer and top player Clix and controller standout Deyy had other plans in the final match. The two players finished the tournament in style, accumulating 12 eliminations and claiming second place.

Clix and Deyy combined for an impressive 41 eliminations, which amounted to 447 points after eight games. These two fraggers did not even need a Victory Royale as they ran away with the NA East DreamHack Open crown. It was a performance that others could only hope to replicate. Clix and Deyy pocketed $15K USD for their six-hour, eight-match effort. Now, let’s take a look at the rest of the leaderboard, where several formidable teams remained in contention until the end.

Also Read: How to Rotate in Season 5 without Rift Fish and Shockwave Grenades 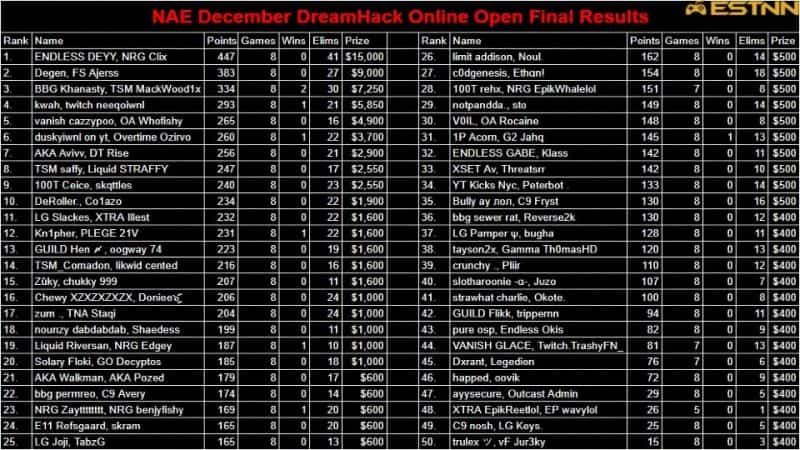 Although Clix and Deyy went nuclear in the Grand Finals, several other teams managed an impressive finish. Degen and Ajerss claimed second place with 27 eliminations and 383 points, which netted them $9K USD. BBG Khanada and TSM MackWood1x secured third place with 383 points, and the pair split $7.25K USD. Kwah, who had arguably the best clip of the entire tournament, finished in fourth with his duo partner neeqo. Vanish Cazz and OA Whofishy rounded out the top-five with 265 points.

In their tournament debut, TSM Saf and Liquid Stretch landed themselves inside the top 10, as did 100T Ceice and skqttles. It was quite the competition to behold as Clix and Deyy showcased their raw slaying ability, yielding Clix his first major tournament victory.

The DreamHack Online Open will continue next weekend with the conclusion of NA West and Europe. Refer to our recent article for exact times and registration information for those two events. Stay tuned to ESTNN for more Fortnite news and updates!

Also Read: FNCS to Feature $20 Million Prize Pool in 2021, Everything You Need to Know