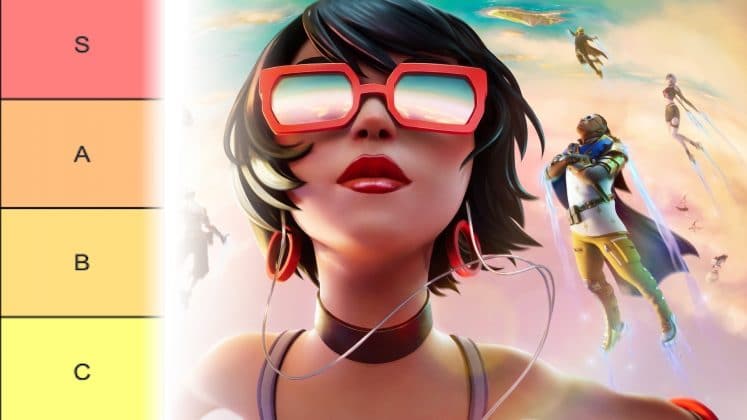 The best Fortnite weapons to grab every time in the latest season!

There are some weapons with better stats that just put them above others in their category. One thing to keep in mind with any Fortnite tier list though is that it’s partially subjective. Some players get better results with different. Some pros even go for some bizarre loadouts. There is also the factor of RNG in the rarity of each weapon you find too. However, there are definitely some with an advantage that you should seek out. This is how it breaks down at the moment.

The top tier of guns in the game are those that are overwhelmingly the most useful right now. These are the guns that have a clear advantage over others in their categories. That can be from a better fire rate, damage, or just having more utility. These are the guns to seek out and keep if you grab them in the higher rarities. These are the S tier Fortnite Chapter 3 Season 3 weapons.

The DMR is a brand-new weapon in Fortnite Chapter 3 Season 3 and it’s been pretty useful so far. It’s a marksman rifle, featuring a scope for long-distance like a sniper. Unlike the sniper though you can fire off multiple shots without reloading. Since the Sniper doesn’t have a one-hit kill at the moment, the DMR is looking much stronger. This is one of the best guns in the game at the moment.

Kind of like the Hunting Rifle, this is a weapon that rewards high skill with aiming. It isn’t going to be for everyone. Its stats are impressive though and it’s on the stronger end of all guns this season.

The Striker Burst Assault Rifle has been confidently sat in the top tier of Fortnite weapons since it was brought back. It’s not received much of a downgrade this season either. It can still completely beam players.

This weapon is by far the best AR in the game right now. It has a DPS of 135, and incredible accuracy. As long as you have decent aim, there’s no problem hitting your targets with the Striker. The main downside to this weapon is that not everyone wants to carry an AR this season with the other options out there. If you’re going for one though then the Striker is easily the best of the Fortnite Chapter 3 Season 3 weapons.

The Prime Shotgun is one of the more recent Fortnite weapons to get added in. It originally came in an update just prior to the Summer event starting. It makes the fourth shotgun in the current loot pool but it has some advantages that make it one of the stronger weapons this season.

The Prime hits pretty hard. You can rack up a lot of damage with this. It also features a first shot bonus damage which can make it absolutely lethal. It isn’t quite the pump, but this shotgun is on the better side of all the recent additions to the Fortnite loot pool. With the strongest SMG also vaulted, this has brought the shotgun meta back in a big way.

The A Tier weapons are a notch below the S, but definitely still worth having around. These guns are still ones you might want to keep in your loadout even if you find a higher rarity lower ranked weapon. The game is fairly well balanced this season so they aren’t that much behind the tier above.

The Two Shot shotgun is on the stronger side of the shotguns in the game at the moment. The unique mechanic of offering two shots can reward accuracy. However, it also has faster shots and a bigger mag to make it a reliable choice for most. The Two Shot shotgun isn’t for everyone, some will prefer the Striker Pump. However, it definitely deserves to sit high in the Fortnite Chapter 3 Season 3 weapons tier list. The reload time is slow here, but that’s par for the course with shotguns in this chapter.

The Combat AR is another recent addition to the loot pool. This is an AR that fires fast with a mag size closer to an SMG. It has heavy recoil, but it can really shred opponents up close. This isn’t the highest-skill weapon, but it’s reliable and can really rack up kills if you get a hold on recoil.

The Singer SMG is weaker than the Combat, but it’s still on the higher end of all the weapons in this chapter. If you’re still looking to focus on the spray meta the Stinger has a lot going for it. The TTK is still low, its DPS high, and reload time decent. The Stinger SMG can be lethal with the right aim. The Combat is the better choice, but there are good reasons to run this if you find a better rarity.

The Heavy Sniper is back in a big way this season. It can’t quite manage the one-shot kill anymore, but that isn’t the end of the world. Well, it is quite a big deal. That one-shot kill being missing is nearly enough to push this further down the list. Although, there are alternatives. You can quickly switch over to a Burst and finish off a player with ease after landing a hit with the Sniper. This is still a great weapon in this season if you’re skilled enough to make the most of it.

The B Tier weapons are around the average or slightly below for guns this season. Most of these aren’t any worse than they were before. However, they haven’t really been improved. Each is outclassed by a different gun in its tier or just too circumstantial to sit at the top. These are the B tier Fortnite Chapter 3 Season 3 weapons:

The Striker Pump is still a great choice if you’re confident in your shotgun abilities. It's slow but hits very hard. This weapon is great if you have amazing aim. Although, shotgun fights aren’t the most important thing this season.

The pistol is usually regarded as starting loot, but it does work well. It rewards accuracy and is surprisingly effective for some situations. Most ditch it once they get proper loot, but the pistol remains about standard in where it sits in a tier list.

The Ranger AR is slower firing but it can deal a lot of damage if used accurately. It’s outclassed by the burst, but has its fans. It’s just barely above the C tier here!

The C Tier guns are those that are lagging behind the competition so far. These are the guns that most people are going to pass over. There are better alternatives in the weapons pool and they have some clear flaws. For most of these, a high rarity version is often left in favor of a green but better gun. These are the C tier Fortnite Chapter 3 Season 3 weapons and why they should be avoided:

The Hammer AR is the new addition for this season. It’s a faster assault rifle like the MK, and it has a lot of recoil. Compared to the burst though it’s just outplayed in every category. There isn’t much reason to pick this one up.

The Auto Shotgun is the faster and more forgiving shotgun. With the Two-Shot in the game though, it’s being outplayed in its main niche.

The pistol is a stronger weapon in the loot pool. Although, neither gun is entirely top tier.

These are all of the main Fortnite Chapter 3 Season 3 weapons. However, there are also the mythic and exotic guns to think about! These don’t really fit into a standard tier list since they're not really accessible in every game. Between taking down a Boss or needing to shell out gold, these aren’t going to be a normal part of your kit. It’s worth knowing all the Fortnite C3 S3 exotic weapon locations, but you can’t grab them every game. You can’t build your game plan around these.

That’s how everything ranks at the moment for Fortnite C3 S3 weapons. However, which you prefer is going to vary a bit. The Combat might have better stats than the stinger, but some prefer the faster fire rate for getting up close and personal. If you prefer different weapons, there’s nothing wrong with being creative with your loadout! In terms of stats though, this is the loot you should be seeking out.