The third season of Fortnite Chapter 3 has kicked off, bringing a lot of change to the game’s weapon pool. Find out the location of all Fortnite C3 S3 Exotic Weapons.

The RNG of random loot isn’t everyone’s style, and that’s where the Fortnite C3 S3 Exotic weapons and Mythics come in. These are unique guns that you can only get in one place. You buy or collect them rather than relying on random loot. Each of them also has a unique novelty that makes them something special compared to your standard gun.

Each of the Fortnite C3 S3 exotics can only be found in a few places. Here we’re going to cover where you can find each of them and what’s coming for Mythics!

We’ll break down which NPCs are carrying which weapons below, but If you’re just looking for a quick reference, this is where you can find them all: The Shadow Tracker Pistol is a pistol with a scope that pings enemies for you on contact. With recon scanners gone, the intel this gun provides is one of a kind in the loot pool right now. The Boom Sniper is a long-range Fortnite C3 S3 exotic weapon. When you take a shot it marks the ground for an airstrike of fire from the sky. You can use this to burn builds or damage players behind cover. Its damage isn’t the highest, but it has some great uses if you think creatively. 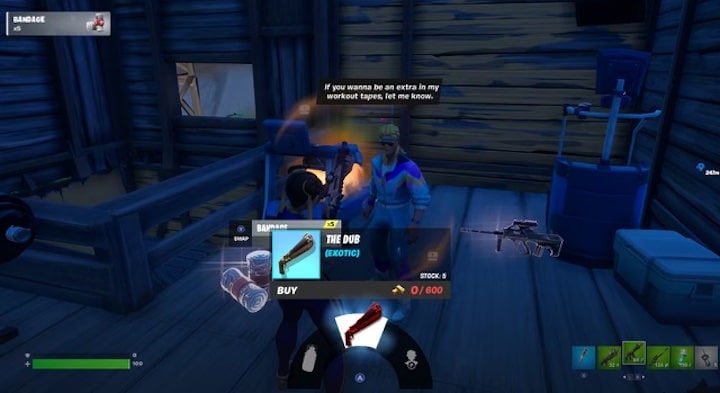 The Dub is a pistol that operates similarly to the Knockback Pistol. Being an exotic, it packs more of a punch though. This is another Pistol Exotic Fortnite weapon. This has a very fast fire rate but as a pistol, it is still a niche weapon. Popping off with it makes for some impressive clips, though. The Chug Cannon is a more unique item, even among the Fortnite C3 S3 Exotic weapons. This is a gun that fires out Chug Splash effects, healing everyone in its vicinity. It takes up two inventory slots but has unlimited healing beyond a minor cooldown. This one is a bit special, as there’s another way to get it this season. Llamas are dropping Chug Cannons, so there will be quite a few of these around. The Grappling Gun is the first addition to Fortnite's mythic weapons this season. After being shown off in the trailer for the game, they're now live. These are working similarly to the Spiderman web and you get them in a similarly frustrating way too.

If you want to get your hands on the Grappling Gun, it's only findable from some set locations on the map. This is like the Fortnite C3 S3 exotic weapons, but you loot them in these spots instead of buying.

In each of these spots, you can grab one from a toolbox. These are going to be popular drop spots though given their rarity, so keep that in mind before dropping in! This is where you can find them: At the moment, there are only those exotic weapons in this season of Fortnite. However, that’s probably going to change. Between the trailer and leaked files, we already know there’s more coming this season. These are some Fortnite C3 S3 exotic weapons and Mythics that are coming in the future:

In the files at the moment, there’s a Mythic Sniper Rifle in the files of the game that isn’t active. We don’t know where this is going to be, but it looks like it’ll be a harder-hitting version of the standard sniper. Darth Vader is currently the final skin in the Battle Pass, but it seems he’ll have a bigger role eventually. The trailer shows the character as a boss on the map with a throwable lightsaber weapon. The skin has a bit of a weird omission, with a random staff instead of his lightsaber for a harvesting tool. Making Vader’s lightsaber into a Mythic or Fortnite C3 S3 exotic weapon would be a good explanation for this absence.

Those are all the Mythics and Fortnite C3 S3 weapons we know of at the moment. If you’re looking for top-level loot though, you’ve got plenty of options. Fortnite C3 S3’s new content includes the Reality Sapling that’ll birth Mythic items once it’s been harvested a few times. Outside those, these exotic weapons are a great way to get guaranteed loot at the moment.