Find out which landing spots are the best in Fortnite Chapter 3 Season 2.

Fortnite’s latest season is underway, and it’s responsible for a public interest resurgence. Epic Games brilliantly removed the game’s building mechanic—a decision many fans embraced. However, the no-build aspect is a relatively small piece of a much larger game update.

Chapter 3 Season 2 introduced unique mechanics such as tactical sprint and a parkour-style mantling animation. Additionally, Epic expanded the map significantly, adding new locations and an extraordinary amount of loot. Points of interest (POIs) have always been a critical component in Fortnite, and today, ESTNN brings you the top places to land this season. The Imagined Order (IO) brought an army to fight The Seven in Chapter 3 Season 2. Their forces include IO Guards, Tanks, and Cannons that you can use to damage enemies. However, no one expected Blimps to be a standout addition this season. IO Blimps appeared above several major points of interest (POIs) this season, and there’s a lot to love about them.

It’s worth checking out any of the six Blimps listed above as your go-to spot. The Blimp locations could change, so keep that in mind. 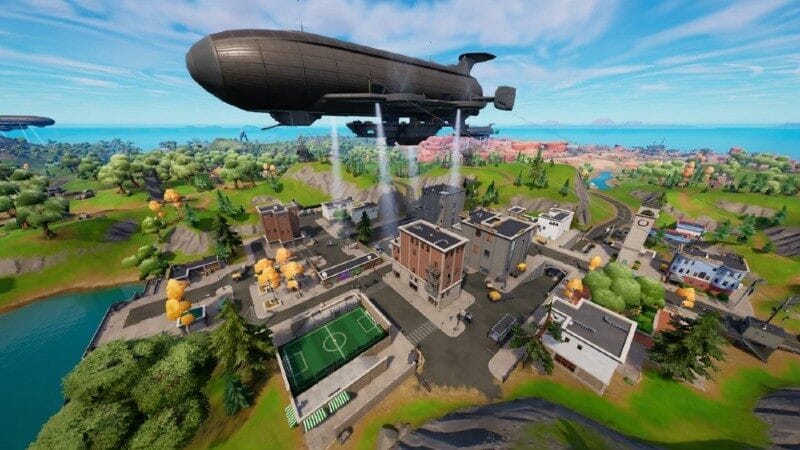 Fan-favorite Tilted Towers returned last season to an outpouring of support from fans. The Chapter 1 staple came back into Fortnite in its original form. Rumors in the scene indicated that Tilted would not survive until Chapter 3 Season 2, but that was not the case. Instead, Tilted Towers remained in the game and claimed a spot atop the list of best POIs.

Tilted Towers provides players with 73 regular Chests—the most of any other location this season. It also contains four Supply Chests, various healing options, and an IO blimp. Like Command Cavern, Tilted will always be a popular place for players to land. We completely understand why and recommend you land here if you’re looking for high-elimination games. 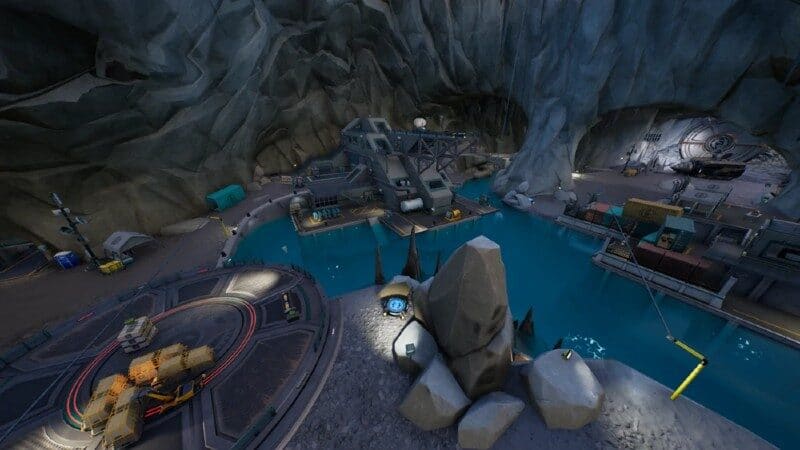 Epic Games renamed Covert Cavern to Command Cavern following the Chapter 3 Season 2 transition. The location mainly remained the same, meaning it’s still the best landing spot in Fortnite. While it usually garners half the lobby’s interest, that is for a good reason. We cannot overstate the power of Command Cavern.

Command Cavern has 58 regular Chests, 33 Supply Chests, a Slurp Truck, a loot-filled vault, two Mythic weapons, two Tanks, etc. Let’s not forget the loot-filled IO Blimp flying overhead. However, like The Grotto from Chapter 2 Season 2, you can expect to fight many opponents and non-player characters (NPCs) when landing here. It seemed a no-brainer that The Daily Bugle would not make it to this season after the Spider-Man collaboration ended. Epic decided to keep the location and somehow made it even better. While it’s the third-most-popular spot in this list, The Daily Bugle could stand toe-to-toe with Command Cavern and Tilted Towers.

This season’s version of The Daily Bugle offers 53 regular Chests, four Supply Chests, an IO Blimp, a Tank and many healing options. There’s not much more you could hope to find in a Fortnite POI. Although the Spider-Man Web Shooters item is no more, The Daily Bugle still has enough to keep it in the upper echelon. Chonker’s Speedway is the only POI on this list that does not have a Blimp flying overhead. That should tell you everything you need to know about this location. It’s somewhat of a hidden gem and one worth exploring.

You can find several Whiplash Cars equipped with Chonker’s wheels here, making the rotation not much of a concern. The Speedway also holds up to 44 regular Chests and 17 Cooler spawns. It won’t take you much time to build a solid loadout when landing at Chonker’s Speedway.

This list is, of course, subject to change. Epic tends to alter POIs throughout the season, and this season’s battle theme indicates that map alterations could occur. For now, you won’t be disappointed, landing at any of the places we mentioned in this article.