Are you curious about what weapons and items the pros are using this FNCS?

Two weeks into Chapter 2 – Season 1 of the Fortnite Champion Series (FNCS), 1Up Analytics broke down the loadout statistics from the NAE Week 1 Finals.

With the release of Fortnite Chapter 2, the item pool was completely revamped. It is always interesting to see how the meta will shift when a new season releases or a new item is introduced. Usually, fans have to wait and see how the pro players adapt and strategize. Take the ballers back in Season 8 for example. No one really predicted ballers to be used the way that they were. It wasn’t until pro players showed how overpowered they were in rotating and end-game that the baller strategy became popularized. The FNCS provides us the first glimpse of how the competitive meta has changed at the highest tier of gameplay.

Chapter 2 – Season 1 is a little different in that instead of a bunch of new items being introduced, many items were removed from the game. This new season has a rather bare-bones feel to it when it comes to the item pool, something competitive players are quite happy about. This limited loot pool leaves only a few weapon categories to be analyzed. 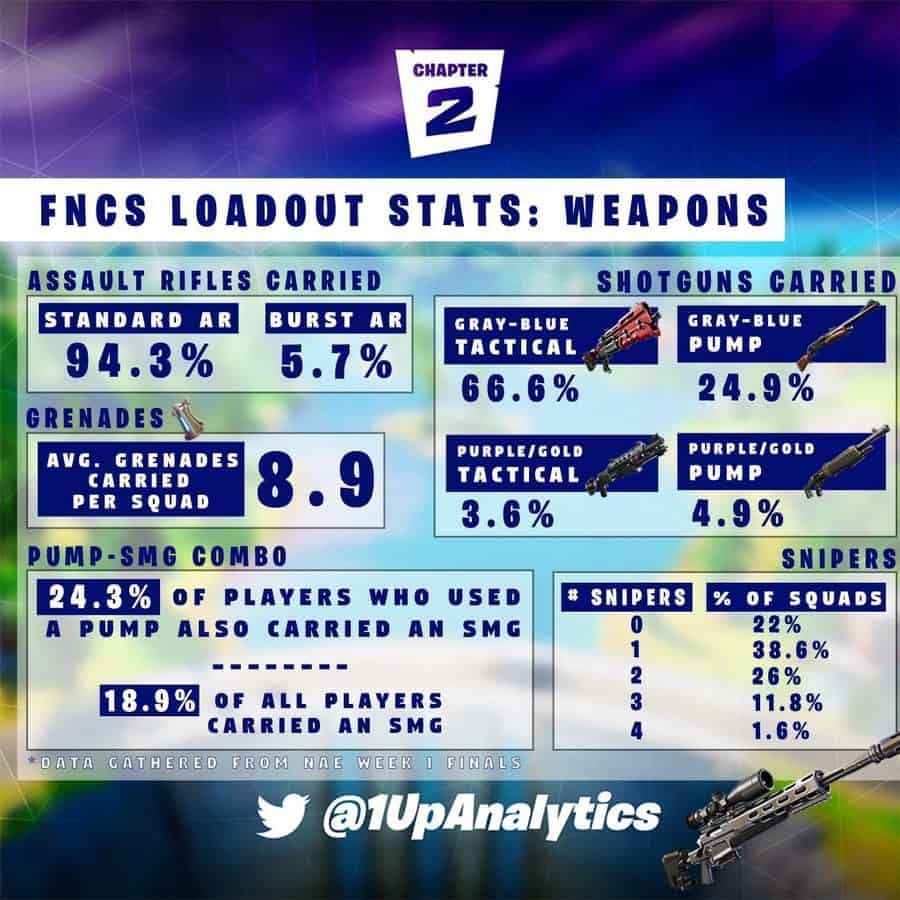 The first thing that stands out is the shotgun distributions. These statistics reaffirm the popular theory that the tactical shotgun has overtaken the pump shotgun as the shotgun of choice. This is a major shift from Fortnite Chapter 1. The pump was seen as a must-have and was even removed from the game at one point because Epic Games said the usage rate was too high.

Now, there are pro players like NickMercs claiming they’d take the blue tactical shotgun over any other shotgun in the game, even the purple and gold tac, due to the increased pull-out speed and fire rate. These statistics prove that other pros feel the same way.

Next, you notice the high number of grenades each squad is holding. 8.9 grenades are a lot of grenades for each squad in the game to be holding on average. These statistics were taken at the end of the second circle so it doesn’t even include grenades a squad may have already used during a fight. This heavy usage rate probably played a significant role in Epic Games’ decision to nerf grenade stack size and spawn rate in the most recent patch.

Some may find it surprising that a whopping 94.3% of players carrying an assault rifle chose the standard AR over the burst AR. This isn’t much different from previous seasons. The huge discrepancy is likely due to the standard AR’s ability to spray and destroy builds more effectively. Epic Games will need to find a way to buff the burst AR if they want more variety in that category.

It appears that SMG usage is way down this season. Only 18.9% of players carried an SMG. I theorize that this is due to a few reasons. One, with the rise of the tactical shotgun, the need for an SMG has dwindled. The tactical shotgun has a fast enough fire rate that switching to an SMG like players used to do when following up a pump shot is no longer necessary. Along with this, the increase in RPG spawns and the need to carry grenades and heals leaves little space to carry an SMG. An assault rifle can fit the role of an SMG fairly well. That is also probably why the standard AR is such a popular choice.

The sniper rifle statistics are relatively balanced. Some squads carry them, some don’t. This is ideal for competitive balance and shows that this is an area Epic Games probably does not need to worry about. 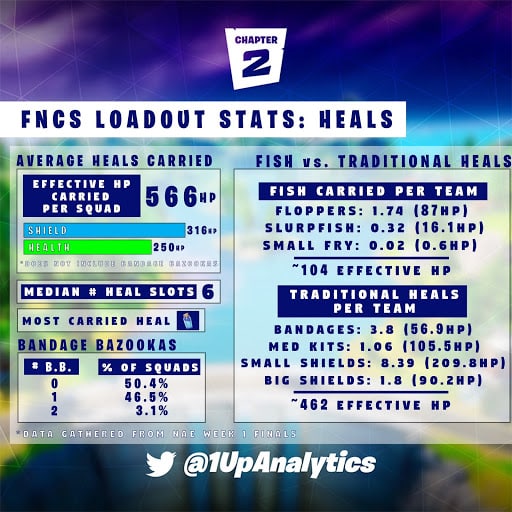 1Up Analytics also provided some statistics for healing items carried.

The takeaway from this is that finding and hoarding healing items is crucial to a team’s competitive success. Players carried a wide variety of healing items, likely whatever they could get their hands on. On average, teams carried 566 HP worth of healing items with 316 HP going to shields and 250 going to health. These items took up an average of 6 item slots per team. The most common healing item carried was the small shield.

One other thing of note was that the number of squads carrying a bandage bazooka was almost exactly 50/50. This is wonderful to see, especially as an Epic Game Dev, as this represents complete balance. The bandage bazooka is a powerful item but it takes up two inventory slots, a harsh trade-off. This kind of balance is what developers strive for when introducing new items.

Stay tuned here at ESTNN for more FNCS analysis in the coming days and weeks. Big thanks to 1Up Analytics for providing this data. Be sure to check out their Twitter @1UpAnalytics to see more details on these statistics.