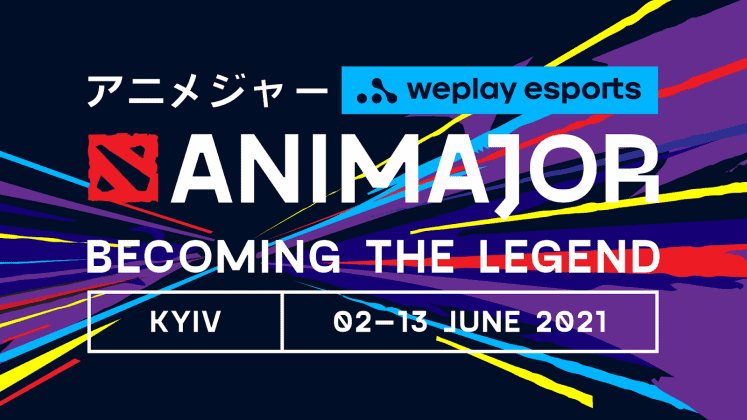 ESTNN takes a closer look at the upcoming Dota 2 Major in Kyiv, Ukraine.

Recently WePlay announced they were the hosts of the next Dota 2 Major competition. An event with a prize pool of $500,000 and 2700 Dota Pro Circuit points up for grabs.

WePlay Esports is proud to announce that we will be hosting the next Dota 2 Major, the AniMajor! 🤩

Set to run from June 2-13, 2021, the AniMajor will feature eighteen teams from different regions. Teams have qualified based on their standings in DPC as they competed throughout the season to earn maximum points for The International 10. Let’s view the teams going to the Major.

Alliance – Winning almost all their matches in the DPC season 2, Alliance topped the table in Western Europe and qualified for the Playoffs of AniMajor.

Team Aster – Topping the table in the China region, Team Aster had a single defeat against EHOME. With such an impressive performance, Aster qualified for the Playoffs.

T1 – Losing their first match against Omega Esports, T1 came back strong in season 2 and surprised a few with their winning streak. First on the standing’s table, T1 booked a spot in the Playoffs.

Virtus.pro – It is not a surprise that VP were undefeated in the entire season 2 of DPC. They have a solid team that performs well in the Pro Circuit matches. However, most fans will expect VP to stay strong in the Major and make it to the very last.

Quincy Crew – Undefeated and standing tall on the top of the standings table are Quincy Crew who will compete in the Playoffs of the Major.

NoPing e-sports – Losing only a single game in the season, NoPing topped their region and will now battle in the Playoffs.

Team Liquid – After a disappointing exit in the Singapore Major, Liquid have looked sharp in the second season of DPC. They came second on the table and are ready to challenge the Group Stages of AniMajor.

PSG.LGD – LGD won five of their seven matches to confirm their spot behind Aster on the standings table. They will now compete in the Group Stages of the Major.

TNC Predator – Holding the second spot on the DPC table in SEA are TNC Predator. After losing to T1 in the tiebreakers for the top spot, TNC will now compete in the Group Stages.

Team Spirit – Following VP who topped the table, Team Spirit clung to the second spot, which ensured their entry into the Group Stages.

Evil Geniuses- Losing just one match against QC, Evil Geniuses booked a spot in the Group Stages of AniMajor. Missing out on the Singapore Major title in the grand finals, they are a strong team going into the upcoming tournament.

Beastcoast – Coming second on DPC standings, beastcoast played incredibly well in the season. Clearing the Group Stages of AniMajor will be their next challenge.

Team Nigma – Positioned third in the standings of Western EU's DPC, Nigma qualified in the Major through Wild Card entry.

Team Secret –  Secret had a solid run in Season 1 of the DPC, not so much this season as they stumbled to get their act together. Regardless of their performance, the team still managed to earn the fourth spot on the table. And now we'll see them on the stage in Kyiv.

Vici Gaming – VG lost to LGD in the tiebreakers and could only get a Wild Card entry into the AniMajor tournament.

Invictus Gaming –  Fourth on the table in China, our previous Major winners won four out of their seven games to acquire their Wild Card entry into the competition.

Execration – Winning four out of seven games, Execration had to fight Fnatic in the SEA tiebreakers to book a Wild Card entry into the Major.

AS Monaco Gambit – Also winning four out of their seven games, ASM.GMB booked the third spot in the CIS DPC to earn their Wild Card entry.