Dota 2: The Heroes Who Should Get Blade Mail Which heroes does Blade Mail work best on?

Blade Mail is an underrated item that can often make a big difference during team fights. We take you through some of the heroes who should get this item.

People with more experience in Dota 2 don’t like to use the term “tank” when describing a hero. This term is usually used in MOBAs to describe a character whose job is to attack a specific raid boss while his team deals damage. Of course, this “tactic” usually doesn’t work in Dota 2, but this doesn’t mean there aren’t heroes whose role is similar to a tank. That’s because their job is to initiate a team fight and soak up as much damage as possible,

Naturally, those heroes prefer to purchase items that give them raw HP and armor. These two stats are important because they reduce the amount of damage the heroes take and make them more challenging to kill. With that being said, there is a special item that is a little bit different in terms of its effect. It is called Blade Mail, and it is one of the few items in the game that has the power to turn around every teamfight.

Blade Mail might not look that special because it is a lot cheaper than others. However, the item has proven itself numerous times, including in pro games. Some people probably remember SumaiL’s Blademail on Alchemist versus Virtus.Pro a couple of years ago that caused VP to lose their Divine Rapier and the game.

Although every hero can purchase Blade Mail and make it work, there are a few names that definitely stand out. Without further ado, here are some of the best heroes who can purchase this item.

The first and definitely the most important hero when it comes down to Blade Mail is Legion Commander (LC). This is one of the few heroes that have to snowball with his ultimate if he wants to be successful during the later stages of the game. Securing duels and the bonus damage is not difficult if you have teammates who know what they’re doing. Unfortunately, this is not always possible in pubs, which forces some LC players to be creative.

Besides focusing on items that do tons of damage, people often purchase Blade Mail and use this item before dueling in order to win. When it is active, Blade Mail returns the damage done by the attack, which means that LC deals twice more damage than usual. Depending on the situation, this should be enough to bring down even the tankiest heroes in the game.

The second popular hero in Dota 2 that purchases Blade Mail at some point in the game is Axe. Unlike LC, this is not a hero who has to engage in fights to snowball. In fact, he's one of the faster-farming offlaners — which means he can get Blink Dagger and Blade Mail in no time.

What makes this item good for Axe is his first ability. Once the hero jumps and uses his “Call”, all enemies under the effect of the spell start attacking him. This is where Blade Mail shines because if he uses it during that time, he will be able to do a substantial amount of damage. In fact, there are many situations where Axe can single-handedly kill the enemy team’s carry within the “call” duration just because of Blade Mail.

With that being said, this is not an item that you want to get right away because it is more effective later on. In other words, it is better to get Blink Dagger and Vanguard prior to purchasing Blade Mail.

The third hero who often goes for Blade Mail is Centaur. He's in a similar position to Axe when it comes to his role in the game; most teams use him as a frontliner and a hero who can initiate team fights. However, instead of forcing enemies to attack each other, the hero has a stun, which makes him extremely dangerous.

Although most good Dota 2 players know they shouldn’t attack Centaur head on, he's often the main focus during team fights in lower-MMR games. That’s why getting Blade Mail is usually a smart idea. Once you have it, you can easily kill some of the heroes in a matter of seconds. After all, Centaur also has an ability called Retaliate, which also does damage to those who attack him.

Another hero that is often among the names that get Blade Mail is Bristleback. For many Dota 2 players, this is the definition of a tank because this hero is known for being one of the hardest to kill. Some pro Dota 2 teams even use him as a carry thanks to his incredible skills. Despite not farming as fast as other names in the game, he has a lot of late-game potential, thanks to his durability.

Although most people will try to avoid attacking BB, they will eventually have to do that if they want to win the teamfight. This is where Blade Mail comes to help because the hero is already hard to kill. This late-game monster becomes even more annoying when you add BM to the equation.

This is probably the hero that has become an icon in Dota 2, especially in Pubs. Pudge is the most played hero in Dota 2, which probably doesn’t come as a surprise because his skill set is unique. Being able to hook someone and kill him makes Pudge one of the most interesting heroes in the game.

Despite his advantages, the hero has one major weakness — he is susceptible to physical damage. Due to his low armor, some of the heroes that focus on physical damage can easily kill him in a matter of seconds. Fortunately, thanks to Blade Mail, Pudge can live through the burst and even kill some of his attackers. This makes the hero a lot more dangerous in the late game. 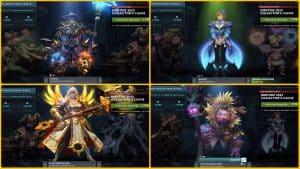