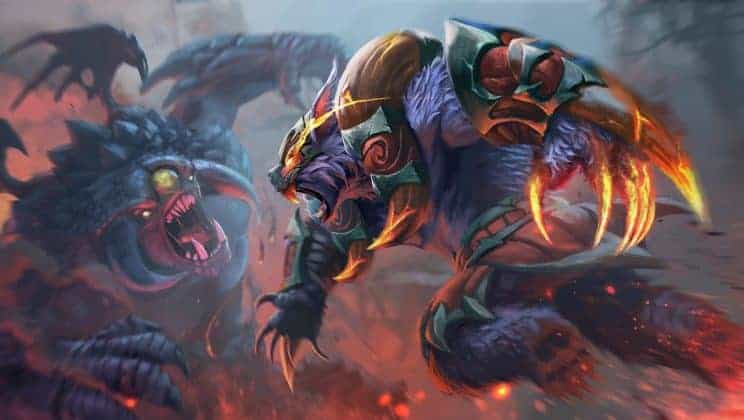 Someone running Ursa? Here's some of the best heroes in Dota 2 for your lineup.

There are not that many heroes in Dota 2 that are famous for being as explosive as Ursa. If we put aside Storm Spirit and Templar Assassin, this is one of the heroes that can easily run over the entire opposing team, as long as it gets a good start. This might sound easy because Ursa does a lot of damage, but in reality, it can be tough. Bouncing back is really difficult once the hero gets shut down because Ursa does not have flash-farming capabilities.

Ursa is one of the most sensitive heroes when it comes down to timing. Failing to get the right items on time can have devastating consequences because the hero won't be able to snowball. As mentioned above, it usually can’t out-farm the opposing team’s core heroes, which means that t won’t do much.

Since Ursa is a delicate hero, she doesn’t work well with every hero in the game. That’s one of the reasons why this article will point out some of the best heroes you should look for when picking Ursa. Keep in mind that some of the future Dota 2 updates might include drastic changes that will reflect on the heroes on this list.

Even though Ursa is a versatile hero that can be played in the mid lane and the safe lane, it usually takes the carry role. As a result, the hero has to play alongside support, which is where Shadow Shaman comes to play. Rhasta is a popular support hero in pubs because he has two spells that can keep enemies disabled.  Furthermore, the hero does a lot of right-click damage at the beginning, which makes him good for harassing the enemy offlaner.

Of course, the reason why SS works well with Ursa is because of Hex and Shackle Shot. These two abilities allow Ursa to attack freely for a couple of seconds and stack her Fury Swipes. Usually, by the time the two disables are over, the enemy’s offlaner should be dead because Ursa does a lot of physical damage.

Another thing to keep in mind about Shadow Shaman is that he is excellent at pushing towers. Thanks to his ultimate, the T1 and T2 towers can be destroyed early on, which will give Ursa enough space to secure Roshan. Needless to say, this is one of the most important things that the hero should focus on because the Aegis makes him a lot more dangerous than usual.

The second hero on the list that makes a surprisingly good combination with Ursa is Jakiro. Despite being a popular pick among pub enthusiasts, pro players rarely choose this hero because there are other supports that do a better job. With that being said, Jakiro does an excellent job at helping Ursa during the laning stage because he can harras, slow, and even stun the enemy offlaner.

Even though the hero doesn’t have as many disabling abilities as Shadow Shaman, his skill set is usually enough to help Ursa get a kill. That’s one of the reasons why these two heroes are capable of defeating even the strongest offlaners in Dota 2.

While we are on the topic of stuns, there is one hero in particular that can be an excellent option with Ursa on a lane. Witch Doctor is one of the famous support heroes notorious for his damage capabilities. If he gets the chance to channel his ultimate, he can do tons of damage to his opponents, especially during the mid game. However, the thing that makes him work really well with Ursa is his stun and Maledict.

The stun gives the deadly bear enough time to stack fury swipes. As for Maledict, this ability can do tons of damage to the target, especially after Ursa attacks it with Overpower. Even if the hero fails to kill his target, the damage from Maledict should be enough to bring down the target.

All of the heroes mentioned so far are great in combination with Ursa because they increase the hero’s kill potential. However, there are scenarios where even heroes, such as Ursa, need defensive support that can help them during the laning stage. This is where heroes like Winter Wyvern come to play.

WW can be offensive because the hero has two spells that do damage. However, the thing that can make him special is that he can heal his allies a lot and prevent them from taking physical damage. This might not seem that important, but it can do wonders in situations where Ursa is under pressure. Don’t forget that the hero’s ultimate reduces a lot of the incoming damage, so when you combine it with Wyvern’s incredible spell, it is easy to see why Ursa becomes really difficult to deal with.

One of the old-school combinations that used to rip through pub games several years ago was between Lich and Ursa. Despite the fact that Lich is not the same hero as he once was, his skills allow Ursa to be a lot more dangerous during all stages of the game. The frost shield is great because it allows the hero not level Fury Swipes and Overpowered, instead of Earth Shock. This means Ursa’s overall damage is a lot higher than usual.

Lich also has an ability that does damage and slows down targets, which means Ursa can be a lot more aggressive. Of course, let’s also not forget about the ultimate, which can do an insane amount of damage if it bounces back multiple tiles.

Last but not least, we have IO, a hero that works well when paired with multiple carries in Dota 2, including Ursa. Even though this is not the most common combo for IO, it is a hero capable of changing the entire course of the game, as long as the player knows what he is doing. When paired with Ursa, the latter becomes almost impossible to kill. Moreover, the hero gets more movement speed, HP regen, and attack speed, which is always great.