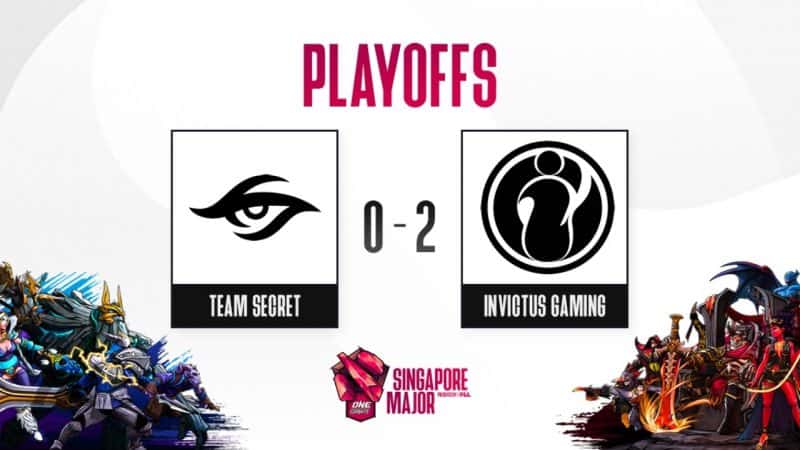 As the Singapore Major closes towards its end, we see a cracking final and some interesting games in the Lower Brackets.

The Upper Bracket Finals was a sheer display of skills and commitment from both Evil Geniuses and LGD Gaming. The Lower Brackets’ Round 3 saw Team Secret go up against SEA’s pride, Neon Esports. Round 3's second set of matches was between Invictus Gaming and Thunder Predator. Round 4 was also a mesmerizing display of top-notch gameplay from winners of Round 3. Here are the recaps of all the games that happened at the Singapore Major:

The first game saw Secret take an early lead with picks like Bristleback and Death Prophet. At around 30-minutes, they had a 4k gold lead over Neon. As the game progressed, Neon seemed to have a lot of problems in taking favorable team fights and got picked off by Secret on multiple occasions. With so many advantages, Secret won the first game.

The second game saw Neon trailing in the early minutes. However, two fights near the 10-minute mark turned things around for them. Secret’s loss of early momentum did not take away much from them, and the game was still very much in the balance. It was only around 20-minutes when a massive fight between Secret and Neon turned into the latter's favor. The fight resulted in an Aegis pickup from Neon converting it into an assured win.

The third and deciding game was an hour long. Although the gold difference in the early game was not significant, Secret was in full control of the game. Some questionable Charge of Darknesses from Spirit Breaker on OB Neons team forced the team to take dangerous fights. Erin Jasper “Yopaj” Ferrer, who was playing Windranger for Neon, kept finding pickoffs to keep his team in the game. A quick Roshan at around 20-minutes helped Neon take fights and push for objectives. The game kept going well, but Secret picked up the pace with decent net worth on Troll Warlord and Death Prophet.

Neon refused to give up, and even after a gold deficit of more than 25k, the team looked to take any kills they could. Overall, Neon’s buyback and performance were great, but only one team could go forward in the tournament, and it was Secret who ultimately won the last match.

All three matches between Invictus Gaming and Thunder Predator were short and swift. The first match went in Thunder’s favor with a scoreline of 19-11. Juggernaut and Death Prophet being the top net worth heroes on Thunder.

The second game was revenge time for IG, and the team closed the game with little to no space for Thunder to bounce back. With picks like Puck, Troll Warlord and Crystal Maiden, IG completely stomped the second game. Invictus won by a whopping 31-5 score.

The third game went on for around 35-minutes. IG picked heroes like Troll Warlord, Storm Spirit and Kunkka. Thunder lined up with Void Spirit, Wraith King and Pangolier. With a significant difference in net worth of both carries, IG won the game with a score of 28-11 and qualified for Round 4.

The first game started with high tempo and a favorable score for Evil Geniuses. With many small skirmishes happening around the map, EG was up by 3k gold at the 15-minute mark. Picks like Razor on Artour “Arteezy” Babaev proved to be great against Wang “Ame” Chunyu’s Monkey King. EG kept winning fights and after turning their advantage into objectives, the team finished the first game as a win.

Thanks to some brilliant play from Arteezy, the second game turned into EG’s favor in the early game. At around 15-minutes the North American team was 4k gold above in net worth over LGD. However, a fight in the Roshan pit changed the momentum of the game for LGD. Ame picked up a triple kill, putting down EG’s Alchemist in the fight. Ame picked up the Aegis. Shortly after the fight, LGD used Smoke of Deceit to force a gank, which turned into a great fight for the Chinese team.

EG was in a dire situation and Arteezy decided to buy a Divine Rapier around 30-minutes into the game. A lost fight for EG came around 34-minutes, where ABED saved Arteezy’s dropped Rapier. However, EG had to take a fight soon as LGD was attempting to take Roshan. This was the last fight EG took in the game, as they lost Alchemist, dropping the Rapier again. EG called “Good Game” instantly following the brawl.

The third and last game between the two finalists started off with an advantage for EG. The North American side had picked an early game draft including heroes like Bloodseeker, Earth Spirit, Beastmaster and Storm Spirit. Whereas, LGD had heroes like Phantom Assassin, Death Prophet and Pangolier. The game had a low scoreline but was in favor of EG with around 3k gold lead at 20-minutes. Although LGD had their Phantom Assassin farmed, the team lacked the ability to fight around their carry and close EG down. Tal “Fly” Aizik’s team kept thriving in team fights and converted them into objectives to win the Upper Bracket Finals.

The first game between Team Secret and Invictus Gaming resulted in a convincing 14-34 victory for the Chinese side. IG drafted a powerful combination of heroes with IO, Windranger, Ursa and Abaddon. Secret had no answers to IG’s anti strength hero lineup with their Alchemist, Kunkka, and Tusk struggling in the game.

Everyone expected a strong team like Secret to bounce back in the second game. However, IG proved they wouldn’t accept defeat. Although Secret had a good early game, IG turned the match on a team fight, which took place around the 20-minute mark. Secret looked to come back in the game again with a Roshan at 25-minutes, but it wasn’t enough. IG won the game 17-26 to qualify for Lower Bracket Finals.