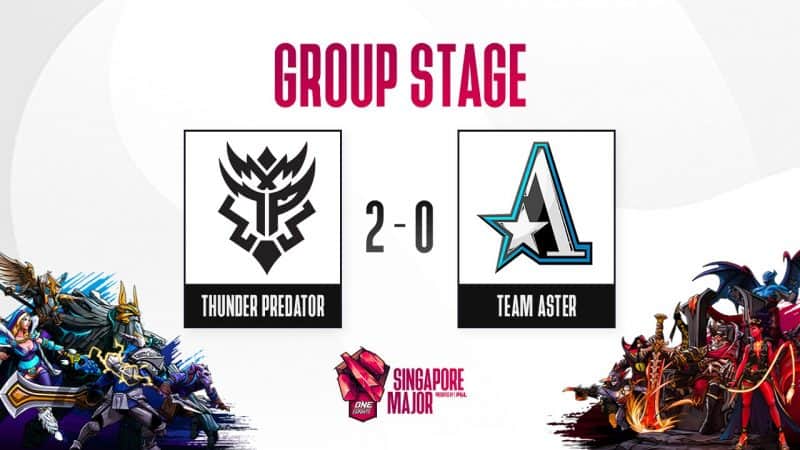 Recap on the five series played of Day 1 of the Group Stage of the One Esports Singapore Major 2021.

Thunder Predator shocked the world of Dota 2 by performing beyond expectations and winning all four series played today. Stream B covered five series today, where three of them were played by Thunder Predator.

With a great performance in Wild Cards, Team Liquid was considered favorites against Thunder Predator.

In Game 1, Liquid had a great laning stage. With the help of two pushing heroes, Lycan and Death Prophet, they were able to secure two tier-1 towers within the first 11 minutes. After a few minutes, Thunder lost four heroes to Liquid but were able to snatch Aegis away from Liquid. After a while, Liquid decided to push for the bottom barracks without Aegis and lost the team fight. Liquid tried the same strategy again and lost four heroes in that fight, along with their gold lead. Soon, Thunder was able to secure Aegis and decided to push the bottom lane, where Liquid fought them, but Thunder prevailed and Liquid called “gg”.

In Game 2, the draft was not in favor of Liquid. They needed to secure a lead in the early stages but the game remained equal until 20th minute. It was Thunder’s sneaky move to kill Roshan that turned the tables of the game. Their Wraith King was already tough enough to kill and an Aegis on top of that made it extremely difficult. As Liquid didn’t have a strong counter to Wraith King, or any durable hero to act as a front line, they slowly and steadily lost their grip over the game. Thunder took longer than expected but closed the game in their favor.

After securing a win over Liquid, Thunder gained massive confidence and Alliance had to bring out their best game to win.

In Game 1, Alliance went in with a clear strategy. That was to pick an offlane Alchemist and buy Aghanim’s Scepter as a first item. Then, they donated it to Monkey King, the position 1 hero, and gained a high net worth Monkey King that could fight anddominate the enemy team. Their strategy followed the perfect path as which they won all three lanes. Alchemist at offlane had the highest net worth and bought a fast Aghanims's Scepter for Monkey King, but this is when their strategy failed.

Even with that item, Monkey King couldn't win against the enemy position 1 hero, Ursa. Thunder secured Aegis whenever it was available, and slowly and steadily built the lead to secure their victory over Alliance. Looking back at Alliance's strategy, it might have been better if they had allowed Alchemist to buy one farming item for himself so that he would be able to farm fast later if the Aghanims's strategy failed.

In Game 2, Thunder had a great AOE damage draft and their ability to secure early game advantages helped them secure their victory. Alliance's strategy to kill Roshan and grab Aegis didn't work out hence they couldn't turn the game around.

Team Aster and PSG.LGD have played lots of matches against each other in the last few months but Team Aster has participated in this tournament with a stand-in, Cheng "Mad" Han, and that brought lots of uncertainties.

In Game 1, Team Aster gave an average performance and LGD kept on building a lead with their core hero, Terrorblade. They put pressure on the enemy's side of the map and didn't even need the Aegis to secure the victory.

In Game 2, LGD's draft didn't consider a reliable tanker or enough disabling abilities. They had a good laning stage but due to the limitations of their draft, they were unable to convert the lead into a victory and eventually lost the game.

Team Liquid had faced Vici Gaming in the Wild Cards and they lost the series by 0-2. So coming onto this series, Vici Gaming was assumed as the favorites. Nonetheless, Liquid played amazingly and surprised Vici Gaming.

In Game 1, Liquid had a great early game, in which they secured a 6,000 gold lead in just 13 minutes into the game. A couple of amazing team fights at mid and securing Aegis at the 19th minute enable them to push for the high ground. Vici Gaming lost that high ground fight too and surrendered the game at the 22nd minute.

In Game 2, Team Liquid had a good start and kept on capitalizing on that advantage.  They secured Aegis and destroyed every tier-2 tower of Vici Gaming. But this time, when Liquid decided to push for high ground, Vici Gaming was able to defend. The only problem was that Vici Gaming was not able to convert that defense into a lead. Liquid again grabbed Aegis and this time, with the help of the cheese, they were successful in winning the high ground team fight and Vici Gaming surrendered.

After winning every series throughout the day, Thunder were favorites coming into this game. Thunder's draft and execution were of high standards.

In Game 1, Thunder played aggressively and spent most of their mid game in the enemy jungle. Team Aster had a weird strategy of combining Phantom Lancer as position 1 and Lycan as position 3. Lycan as an offlaner is neither a durable core nor a disabler. The only thing Lycan provided was more move speed to Phantom Lancer. Apparently, Team Aster thought Ursa wouldn't be able to chase the main Phantom Lancer, and his illusions would eventually kill Ursa. This strategy worked for a while and Team Aster was able to make a comeback of 12,000 gold after suffering a 32,000 gold disadvantage. But Thunder, with a great high ground defense without their position 1 hero Ursa, saved their game and eventually destroyed Team Aster's base.

In Game 2, it was an average start for both of the teams. But as soon as Thunder's mid hero, Templar Assassin started rotating around the map, they were able to find many kills, and just at 15 minutes into the game, they gained an 8,000 gold lead. They secured Aegis in the next couple of minutes and didn't let go off map control. Team Aster tried their best to defend but the attack force of Thunder was unstoppable. Team Aster surrendered at 22 minutes into the game and Thunder Predator remained undefeated throughout the day, with an unbelievable 8-0 performance and securing the top spot on Day 1 of the Group Stage.