ESTNN crowns Illya "Yatoro" Mulyarchuk our Player of the Year for 2021.

Every year; apart from 2020, since Dota 2's release, we've had the chance to watch The International. This is the most prestigious competition in this game, bringing together the best players in the world. Needless to say, the team that wins writes down their name in golden letters in the game's history. Oh, and also win themselves millions of dollars.

After the Covid pandemic in 2020, TI 10 was postponed until 2021;  increasing the hype for the competition even more. Although people expected some of the well-known names, such as Team Secret or OG to win, it was the CIS powerhouse Team Spirit who managed to lift the trophy. Similar to OG a few years ago, the CIS squad consisted of inexperienced players, most of whom hadn’t even played at TI before. However, this didn’t stop them from dominating the competition and winning one of the world's most prominent esports events.

While it is true that every player from Team Spirit was in a league of its own, one of them shined more than others - Iliya “Yatoro” Mulyarchuk. TS’s carry was one of the most dominant forces in the entire competition, which is why we think he deserves the prize for being the best player of the year.

Yatoro was almost flawless in all of Team Spirit’s games. What makes him so dangerous is the fact that he can play various heroes. In fact, he even holds the reconds for securing most rampages in The International main stage. With that being said, let’s learn more information about this player and why he is the best. 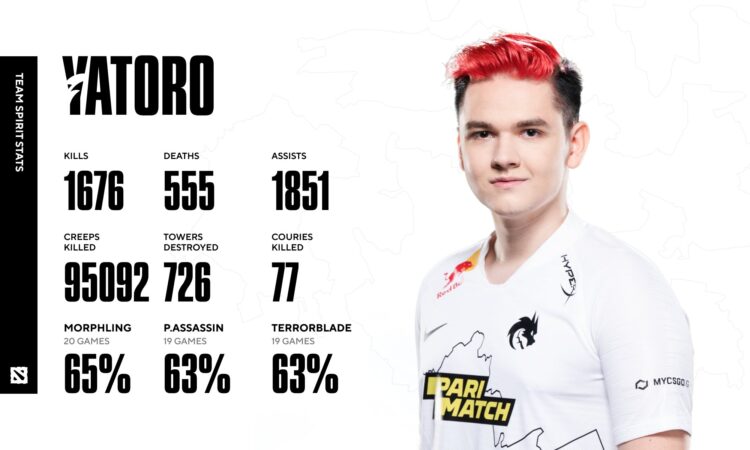 One of the biggest problems that some top-tier carry players have to overcome is their versatility. They might be good with a couple of heroes, but if they are not in the meta or get banned, these people don’t have to adapt to something new. Not everyone is capable of doing that, but Yatoro is one of the few pro players whose hero pool seems endless.

During TI 10, Yatoro played a total of 14 hours in 20 games, which is really impressive. His ability to play so many heroes makes dealing with Team Spirit really hard. Because their opponents never know what to expect. The 18-year-old Dota 2 prodigy is capable of utilizing almost every hero in the game.

Which are his best heroes?

As we’ve mentioned earlier, Yatoro is one of the few players in Dota 2 that can make almost every hero work. However, this doesn’t mean he doesn’t have favorite heroes. One of them is Morphling, one of the most popular late-game monsters in Dota2. Yatoro proved that he is one of the best Morph players in the world at TI 10, although Nikolay “Nikobaby” Nikolov is also famous for being a monster on Morphling.

Another hero that definitely plays an important role for Yatoro is Faceless Void. This was not the most popular carry at TI 10. But the CIS superstar showed the world that he could do wonders. Besides being one of the best right-clickers in the game, Faceless Void is also among the few heroes capable of changing the course of a team fight; thanks to his ultimate.

Last, but definitely not least, the hero Yatoro became famous for is Slark. He's one of the meta carries, which is why the CIS player picked him a couple of times during TI 10.  Slark is one of the few heroes in Dota 2 that allows players to play really aggressively. Needless to say, this fits Yatoro’s style because he always tries to be aggressive when possible.

Yatoro is also a well-known pub player and always the competition for the highest MMR in the world.

Some of the professional Dota 2 players don’t pay a lot of attention to their MMR because they just want to play for fun. However, others have become popular because of their high rating; so they do everything in their power to “keep grinding”. Yatoro falls into the second category. He's among the highest-rated players in the world. He first reached 12,000 MMR in November 2021, which means that the road to 13,000 MMR is open. We have no doubt he will succeed, so it is just a matter of time before becoming the highest-rated player in the world yet again. Nowadays, most of the world's best players have to be good at several positions if they want to succeed at the top. Since Yatoro is one of the most versatile players when it comes to heroes, it probably doesn’t come as a surprise that he's also a good mid laner. Most carry players often switch their positions with the mid lane, so they need to know what they’re doing. Although Yatoro definitely shines more when he has the chance to farm, he can also utilize many of the top agility mid layers. You can often see him playing heroes such as Templar Assassin, Shadow Fiend, and Invoker.

While it's true that many other players are also deserving of the crown in 2021, the fact that Yatoro played a crucial role for Team Sprit in TI 10 has to be taken into account. This Dota 2 superstar is just 18 years old; which means we should keep seeing him in action for at least a few more years to come. We just hope that the TI victory won’t force him into early retirement — because he has a lot more to offer.