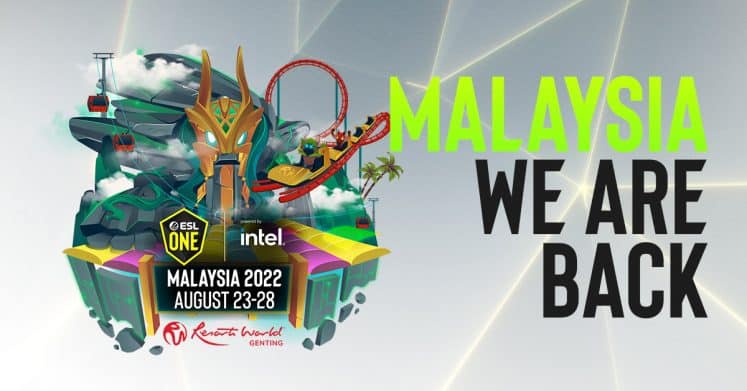 The dust has settled after the end of the PGL Arlington Major 2022. The second Major of the current DPC was crucial for many Dota 2 teams because some needed the points to qualify for TI. In the end, we already know the twelve teams that will be able to compete in the biggest Dota 2 event this year.

Since TI 11 will have 20 teams, the other 8 have to secure a slot via the qualifiers. The latter will begin a couple of weeks from now. Fortunately, we have another epic event before that – ESL One Malaysia 2022.

Although it is not a part of the DPC, this event will bring 12 of the best teams in the world. The event will begin on August 23 and finish on August 28. We already know enough info about the participants and the event itself, so let’s go through everything.

ESL One Malaysia 2022 will include twelve teams from different regions. Seven of them received a direct invitation, whereas the other got their slot after competing in the qualifiers.

The 12 teams will be divided into two groups of six with a round-robin format. Every match is in Bo2, and the top 2 teams from the group will advance to the Playoffs’ Upper Bracket. The 3rd and 4th place teams will head over to the Lower Bracket, whereas the other two will be eliminated from the event.

The playoffs will occur between August 26 and 28, and the format will be a classic double-elimination bracket. Naturally, every match is Bo3 until the Bo5 Grand Final. ESL One Malaysia 2022 will take place in Genting Highlands and will have an impressive $400,000 prize pool.

After we’ve learned more about the event itself, the next thing is to take a look at the broadcast talent. Unsurprisingly, we will find a lot of familiar faces there.

People who will watch the English streams will see the most popular hosts, such as Slacks, Tsunami and Sheever. As for the commentators, we will have the chance to watch ODPixel, Ephey, ninjaboogie, syndareN, CAP, SVG and more.

These are my predictions for the top 4 in ESL One Malaysia. Think you can beat me?
Check out the free @ONEEsports Fantasy Challenge and win prizes! https://t.co/BJbR8BIURp pic.twitter.com/ZmyVci7kmk

The Groups and Teams

Now that we know more about the upcoming event, we will see the two groups. Keep in mind that this is the last big tournament prior to TI and its qualifiers, so it might be some team’s last chance to practice on the big stage.

The first group at ESL One Stockholm 2022 consists of the following teams:

The group definitely seems interesting on paper, but we can already see some favorites. Starting with Entity, the European team earned its slot here from the qualifiers. Most people expected the organizers to invite them instead of Alliance, but it seems like this was not the case. Entity proved themselves in the last Major, and they are certainly a team that others should not underestimate.

The second big name in this group is undoubtedly Team Aster. The Chinese squad is actually one of the big favorites to win the event because they are really strong right now. Despite losing in the LB final against Team Spirit a couple of days ago, Monet and the rest are really strong and have what it takes to win.

Although many underestimate Thunder Awaken and Talon Esports, these two are also among the hidden favorites. The SEA powerhouse failed to show its prowess, but everyone knows that kpii and his crew are amazing players. On the other hand, Thunder Awaken has already established itself as one of the top players in South America, so it is time for the team to shine internationally.

Nikobaby’s team is definitely the big surprise here because Alliance had the worst result during Tour 3 of the DPC. The team finished without winning a single game and will have to fight in Division II for the next DPC. Unsurprisingly, Alliance made some roster changes. With that said, Aramis won’t be able to compete in the event due to visa issues, which means dEsire will take his place.

As for Team Secret, Puppey’s roster missed out on the PGL Arlington Major, so they want revenge. The team recently added Resolut1ion to its roster, so it has enough firepower. The question is whether Secret will be able to use it.

The second group will consist of the following names:

It probably doesn’t come as a surprise that many people assume OG will have little to no problems in the group. The European powerhouse was among the first teams to secure a slot for TI 11. What’s more, they’ve won the first Major and did pretty good in the second one before losing to PSG.LGD. Fortunately, their arch nemesis won’t be here.

BOOM Esports is also another team that we will keep an eye on, especially since the team is from this region. Yopaj and the rest already won one non-DPC event this year after their victory in Dubai a couple of months ago. Hence, the team can explode and win this tournament as well.

The third big name here is Nigma Galaxy. Even though TI 7 winners were not in Division I during Tour 3, the addition of SumaiL definitely makes them one of the most dangerous opponents. This event will be very important for them because it will show whether they can compete against some best.

Lastly, we have Fnatic and TSM. The SEA squad recently got into a controversy after claiming the last 12 spots and received a direct invitation. The strange thing about it was that Fnatic had only one extra point over Outsiders. What’s more, the team played with three substitutes in the PGL Arlington Major.

As for TSM, Timado and the rest failed to qualify for the last Major, despite finishing second in the previous one. Hence, people will keep a close eye on them.