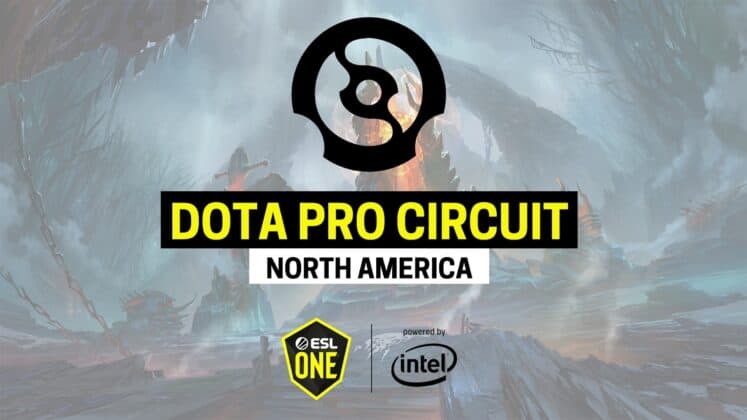 A brief recap of Dota 2 circuit matches in the NA region.

We see DPC conclude with Evil Geniuses on top, followed by TSM and Quincy Crew in the second and third positions, respectively. The second division has  5RATFORCESTAFF in the first position. Felt and The Mystery Machine are second and third on the table. Here are the results from the games during the last week.

The first match saw both teams extremely active, engaging in a lot of small fights in the early game. QC had the Aegis around 20 minutes into the game, and they were keen on fighting TSM. It was not until 32 minutes that TSM got themselves a huge gold lead. Once in the front seat, TSM dominated QC and won 22-30 in 43 minutes.

QC was on their toes in the second match and played well to get an early lead. TSM had a tough time facing QC’s heroes, who had great mobility, except Medusa. After Aegis and a huge gold advantage, QC won 6-20 in 25 minutes.

The last match was low-scoring and had a slow start. QC was the first one to get a lead and was ahead by 3k gold at around 20 minutes in the game. They grabbed the Aegis before the 30-minute mark and took the objectives with little resistance from TSM. QC won the game 18-17 in 37 minutes.

The first match had lots of skirmishes before Evil Geniuses took a 3k gold lead before 20 minutes. As expected, the lead wasn’t a very significant one and DogChamp had space to recover. The game went back and forth between the two teams until EG finally got a major advantage and won 47-26 in 48 minutes.

The second match saw EG steamroll DogChamp. After getting a very early advantage, they completely dominated their DogChamp. EG had an aggressive hero draft with Viper, Night Stalker, Pugna and Phantom Assassin. The score was 4-33 in 17 minutes.

Evil Geniuses ripped Quincy Crew in the tiebreaker. EG had a slight advantage in the draft with both fight and farm heavy heroes. EG had the upper hand in the laning stage itself, but they got a massive lead around 22 minutes into the game. Once EG was ahead, the game was one-sided, with QC posing little threat. EG won 33-5 in 33 minutes.

We saw QC and TSM equally matched in the early minutes. However, TSM got the lead after about 11 minutes in the game. The early game was very active and exhilarating to watch. TSM developed on their advantage and won the game with a score of 38-16 in 29 minutes.

EG was ahead in the laning phase of their final tiebreaker. An early lead of 2-3k gold was a lot to fathom for TSM. After the initial advantage, EG was unstoppable, and TSM couldn’t even score a single kill for the first 14 minutes. They couldn’t establish a path to come back and lost 28-6 in 23 minutes.

5RFS breezed through the first match. Stratyk were clueless from the very start of the game, and with time the situation became worse for them. 5RFS scored 7-43 in 23 minutes to win the match.

We saw a little more fight from Stratyk in the second match. The early game was more stable, but 5RFS took the advantage before the 20-minute mark. Once ahead, they rampaged forward and won 41-12 in 38 minutes.

The first match between these two was extremely competitive and entertaining to watch. Arkosh had a lead after 30 minutes into the game as they looked to take objectives on the high ground. BNY tried well to bounce back into the game but with mega creeps it was difficult for them. Arkosh won 51-42 in 51 minutes.

The third match saw BNY get an early gold lead. However, Arkosh made a comeback by taking the Aegis before the 25-minute mark. They won fights and sealed the series with a score of 30-26 in 38 minutes.

5ManMidas had a tough time in the first match, where they had to face a counter lineup. Felt had Medusa, Razor and Weaver caused many problems for 5MM. The score, in the end, was 12-30 in 32 minutes as felt got their first win against 5MM.

The second match saw felt picking Death Prophet in mid and Weaver as an offlaner. Although 5MM had a decent lineup also, their game didn’t go as planned. DP got a great start and so did other lanes, which helped felt win 14-33 in 26 minutes.

KBU.US breezed through the game against Black N Yellow. They had a great early game and took the lead to win 42-16 in 43 minutes. Three heroes from KBU including Dragon Knight, Storm Spirit and Terrorblade had high kill scores on the board.

KBU.US was ahead in the early minutes against 5ManMidas. However, they couldn’t hold the lead forever and 5MM picked up momentum too. KBU was behind in terms of net worth during the mid-game. Although ahead, 5MM were having trouble destroying the middle high ground structures. This gave KBU a chance to come back and win the game 49-22 in 59 minutes.

We saw a well-balanced game between these two. However, BNY took the lead and slowly built the advantage to win. The score, in the end, was 41-37 in 54 minutes.

Felt Vs The Mystery Machine

The first match was long and hard-fought. Both teams were equally matched, but Felt edged it with a 33-32 win in 54 minutes. TMM responded well in the second game and won by a 39-30 scoreline in 37 minutes. The last match had felt on the top, winning the series. The score of the third match was 26-35 in 36 minutes.

Stay tuned to ESTNN for more coverage on the Dota 2.