Valve have introduced what was one of the most awaited updates in Dota 2. The Spectre Arcana. However, that is not all the company has brought forward with the update.

Valve has added a new game mode called Nemestice. And, they've surprisingly introduced a brand new Battle Pass with it. However, it's important to note; none of the proceeds from this Battle Pass will go to The International 10’s prize pool. The update is solely to give users the festive experience they are used to during TI. And of course to make some money on the way. The big question now is Should you buy the Battle Pass? Let’s answer the question with a breakdown of the update according to different levels.

To simplify things let’s look at what major things users will get per 50 levels of the Battle Pass. The first 50 levels will not get you any major stuff, but you will get four Nemestice 2021 Immortal Treasures and five Nemestice 2021 Themed Treasures. 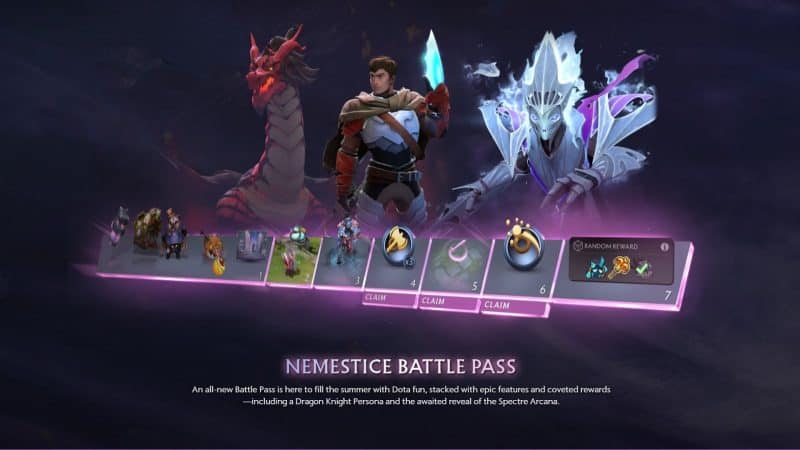 The First 50 levels of course include a new courier, music pack and ward, along with many taunts and other small rewards. Then, within the first 100 levels, you'll score treasures, as well as voice lines; which are being introduced from level 58 onwards. You'll also get new creep sets at level 125. But it's not until level 195 will you get a major reward worth the price spent.

At level 195 you will get the Davion of Dragon Hold persona which is exactly like the anime-themed Dragon Knight. Of course, Valve is very smart and has not given all the bits and pieces of the persona on a single level. They have divided Davion’s sword on level 200, his pauldrons at level 215 and his helm, which is basically a masked Davion at level 222. So at level 222 is where you will get the entire set of Davion’s persona.

Let's now have a look at the next major thing you will get in the Battle Pass. At level 275 is where you will find Kid Invoker’s Dark Artistry Throwback set. Which is Invoker’s persona featuring the Dark Artistry set. It's something to be excited about since it has passed all the special effects from the Dark Artistry set on to the persona, with two styles similar to the original set. Invoker looks like kid Goku in the second style for some visual reference.

Coming to the next big thing on the Battle Pass and that is the immensely awaited Spectre Arcana. At level 330 you can unlock this gem. There is no major thing after this level unless you are interested in looking at naked animated Davion emoticons which Valve has sneaked in at level 500.

Is it worth it?

According to the major rewards breakdown of the Battle Pass, it makes little sense to purchase the level 1 pass. Level 50 gives users a slight advantage, but it is the ultimate 100 level pass that makes the most sense. Since the Battle Pass is valid till August 18, 2021, there isn’t much time to level up and users who want all the major stuff have to reach till level 350. Of course, users will have to invest on further levels and grind to score battle points to move up the ladder.

So, yes, the Battle Pass is worth it, if the user plans to go all out till level 350. But that is just our opinion. It's down to preference and budget and if players are satisfied with immortal and themed treasures. Or if they want the cherry on top of the cake.