How the draft impacted the series with a score of 1:1.

Team Secret’s captain Clement “Puppey” Ivanov and Team Nigma’s captain Kuro “KuroKy” Salehi Takhasomi have been rivals and teammates since the very first TI. Plus, they're the only two players in the world to participate in every international so far. There's no one in the world who knows them the way they know each other and this results in amazing battles between their teams.

Recently, Team Secret played against Team Nigma in the Wild Card stage at the AniMajor in a Bo2 series that was tied.

We take a deeper look at the series, breaking down both the draft analysis and the game analysis. 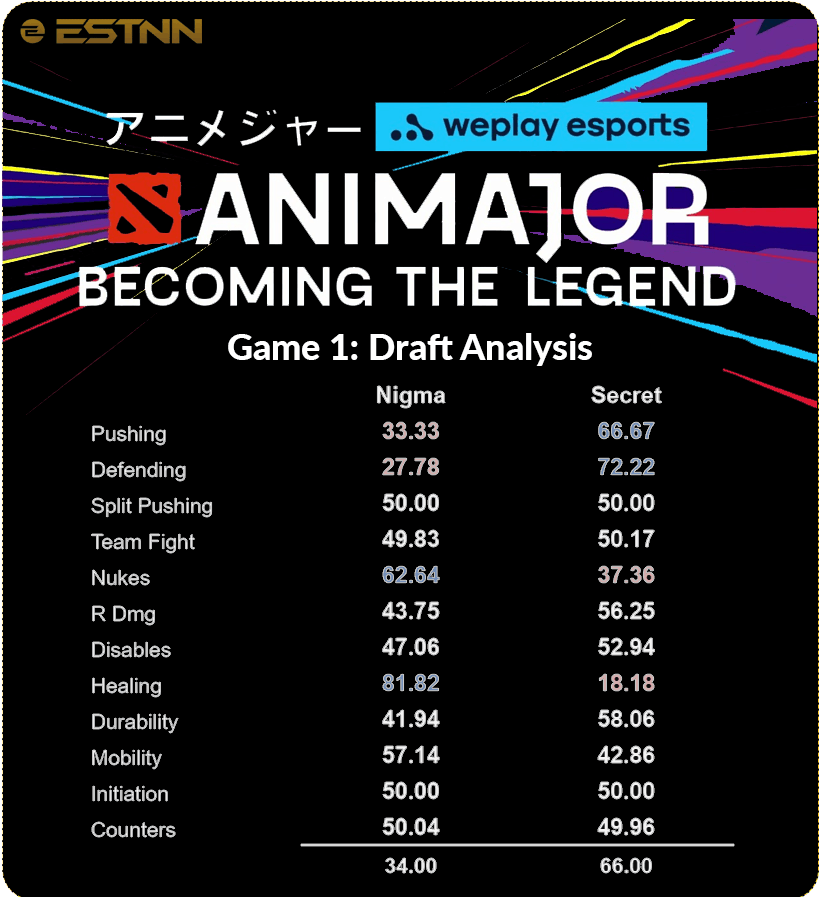 Game One saw Team Secret with a huge advantage in the draft; 66% against Nigma’s 34%. But, even with this advantage, Secret lost the game and that is because of their poor execution. As Secret picked Lone Druid, Enchantress and Templar Assassin, they had a huge pushing advantage and they should have secured all T1 towers before 15-minutes was up. But they didn’t. In fact, they destroyed Nigma’s first tower at the 22-minute mark. Which is extremely late.

Team Secret’s players were not coordinating at all. They wanted to push lanes and find some kills but they were all going into the enemy area one by one. Team Secret made a couple more poor decisions, deciding to gank Nigma's core heroes without their own position one and two heroes joining in the kill. This backfired and instead of gaining a kill, they lost their heroes and towers. Eventually, Nigma had farm, secured Aegis and started dominating the map.

Whereas, Team Secret had a good draft and they were able to fight even with a disadvantage of 5k net worth. In one team fight, they killed a few opponent’s heroes and brought down the difference from 5k to 1k, but they couldn’t turn the game around completely from that point. In the end, Nigma played to their strength and won the game. 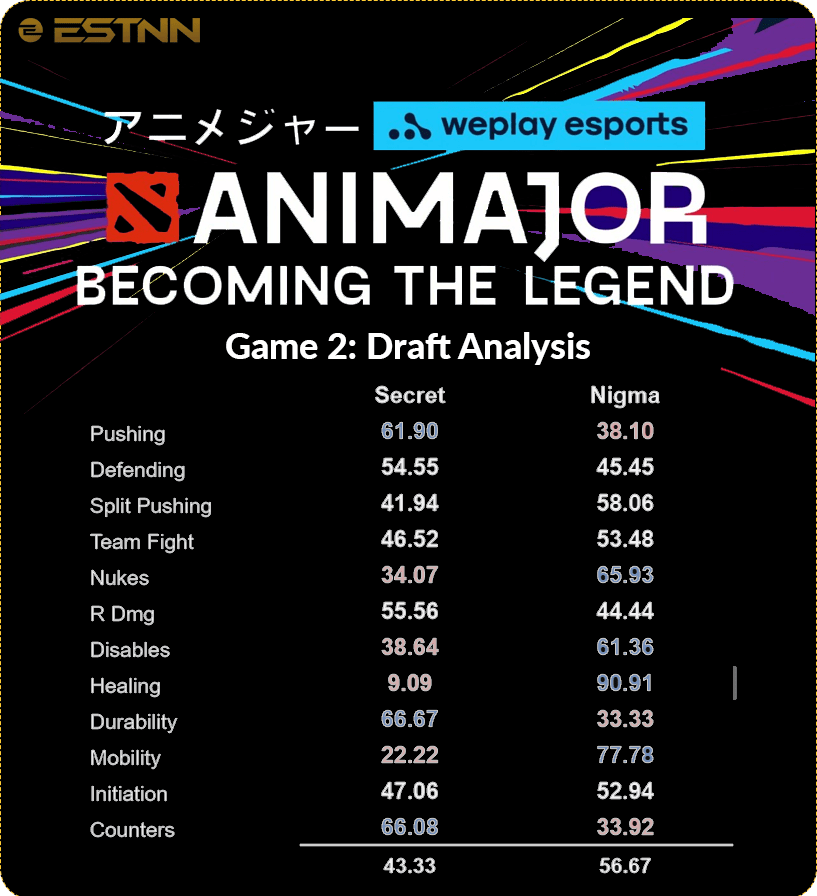 Once again, Team Secret decided to have strong advantage in pushing; a difference of 62% to 38%. But, the overall draft advantage was a little bit in Nigma’s favor with 57% to 43%. This match has a little controversy attached to it as Valve’s servers were crashed and the game had to be replayed completely. Before the crash, Nigma was leading the match and were slightly expected to win. After the rematch, Team Secret took control of the game. It was the same fight at mid that changed the course of the game. Nigma took a fight at Secret’s mid t1 tower, and the only difference was that in the first game, they won that team fight and in the second game they lost. Same fight, heroes and place, but different execution.

As we observe the progress of this game, Secret executed their draft perfectly. They pushed lanes, gained control over the map, secured Aegis, and slowly but steadily secured their win. As Nigma had a good split pushing advantage, they were still able to find farm on their cores and kept the game alive longer than expected. Nigma also had a good advantage in team fights that’s why they were able to fight,  even against a huge net worth disadvantage of 30,000 but their heroes were more countered so they couldn’t win the team fight.

Be sure to stay tuned to ESTNN for more news and highlights from the WePlay AniMajor!