All the action from the last week of SA's DPC.

South America might not have as many fans as other regions in Dota 2, but the DPC proved to everyone that several teams stand out. Following five weeks of intense action, it was time for the last couple of games. We already knew the teams that would remain in Division I, and the team that would go to Div II. With that being said, ther were a couple of interesting matches, so let’s check them out.

We breakdown all the results from Division I's final week.

Infamous vs APU King of Kings

These two teams are among the best in South America, which is why the clash between them was amazing to watch. Even though neither had the power to remove Thunder Predator from first place in Division I.

Despite gaining a lead in the series after winning game one, APU was unable to take the series. Infamous managed to bounce back after two dominant victories. The second game of the series included Ember Spirit and Naga Siren, two heroes that INF took full advantage of. Although APU had Lycan and Gyro, the roster was unable to defeat its opponents.

After losing game two, Thomas Jaulis “Valqui” Romero and his teammates crumbled in game three. Infamous demolished their opponents in a quick 20-minute game and won their final match.

Despite achieving good results, these two South American teams did not manage to secure a sport for Division I. However, Lava’s victory put the team in a better position because Hokori will have to compete in the upcoming tiebreakers.

Many people expected this series to have tons of back-and-forth action. However, Leonardo “Leostyle-” Sifuentes and the other members of his team outplayed their opponents. Both games lasted under 30 minutes, thanks to Lava’s dominant performance. The powerhouse won the laning stage with little to no effort and secured themselves the victory.

Last but definitely not least, this was the most anticipated series of Division I. Thunder Predator and beastcoast are two of the best teams in the region, and their results prove it yet again. Although BC used to be the dominant force in SA, TP took this position after winning the direct clash.

Following the 2-0 victory, Thunder Predator is one of the few teams in the world that didn’t lose a single series. What’s even more impressive is that the all-star roster didn’t have any problems, even against BC. The first game was more intense because it lasted around 40 minutes. However, the second one was like a walk in the park.

Templar Assassin and Timbersaw gave TP a comfortable lead early on, which they used to destroy their opponents in the mid-game. Beastcoast had no way to survive the deadly attacks and lost the game. This placed them third in Division I because Infamous won its last series.

All the highlights from the last week of games in SA's lower bracket.

Interitus is one of the few teams in South America that disappointed a lot of people. Although its roster didn’t seem that impressive, the team showed that it has a lot of potential. Unfortunately, it was unable to utilize it, which is why it just managed to save itself from being eliminated.

On the other hand, Balrogs is one of the two teams in Division I that secured itself a sport for Division I. This happened after the team’s victory against INT this week. As expected, both teams here one-sided as Balrogs completely dominated. Although Interitus tried to counter them by picking the hottest heroes in the meta, they were not enough to prevent them from losing.

UT is one of the few teams in this DPC that failed to win a single series. In fact, the team only has one map, which is a clear sign that it needs to make changes in the future. It seems like it will have plenty of time to resolve its issues because it finished last in Div 2. Hence, the roster won't be a part of it next time.

As expected, Omega did not have any problems, especially in game one. The second one was a lot more interesting to watch because UT picked several good heroes. In fact, Christopher Paolo Andrés “Moonlight” Roldán Navarro and his friends even had the lead for a while. Sadly, Omega managed to bounce back and won the match.

GP was one of the two teams (alongside Infinity) that should have advanced to Division I. However, the team failed to achieve its goal after losing against the group leaders.

Despite the fact that Gorillaz-Pride gave everything they had, Infinity was the better team. After a three-game thriller, the leaders in Division II proved why they are the best and deserve a spot in Division I.

The first game was the most interesting one because we got to see some late-game action. Lucky for Jeanpierre Valente “PiPi” Arroyo and co., Infinity took several team fights and got the lead.

GP managed to equalize the series after a dominant performance in game two. Unfortunately, they were unable to win the most important map, despite having good heroes. Infinity’s TA and Ember Spirit helped the SEA powerhouse win the game and force GP to stay in Div II. 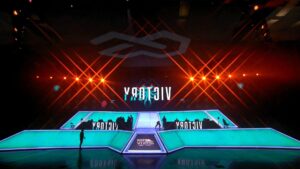