CSGO Why Spectating Pro Players Is Usually a Good Idea People who don’t have enough experience playing CSGO think that they only need to play as much as possible to get better at the game. Actually, by spectating pro players, you'll be surprised how much you can elarn.

There is no arguing that this is the most important part of the equation, but it is not everything. Besides spending countless hours playing Deathmatch, you also have to keep an eye on the professional players.

Old school CS 1.6 fans probably remember that watching our favorite players in action was nowhere near as easy as today. There were no such things as Twitch or CSGO betting sites that allowed us to watch the matches while they unfold. Instead, we had to use HLTVs and other things that were not that convenient.

Fortunately, this is no longer the case because everyone can watch any CSGO event in seconds. HD Live Streams, professional commentary and in-game video are available with just a few clicks. Despite that, some people do not take advantage of those things because they think it is not worth it.

This article will walk you through some of the reasons why watching the best players in the world is crucial if you want to become a better player. So, let’s go through everything you should be aware of.

You can learn tons of new tactic

Some players do not think a lot when playing CSGO because they just want to open the game, kill other players and have fun. However, others are not like that, especially if they want to play competitively and have to come up with tactics for their team.

Many players think that they already know everything about the game, but CSGO is one of the most complex shooters for a reason. There are new tactics all the time, and usually, they become available courtesy of the best players in the world. You won’t have access to them unless you pay close attention to the live match.

One of the things that are important to know when paying attention to things like CSGO tactics is that not everything applies to your skill bracket and teammates. Teams come up with unique things that work when playing with and against the best. However, most of them won’t be helpful if you are stuck in Silver or Gold. That’s why you should always try to adapt the tactics to your situation, so you can make the most of it.

MORE FROM ESTNN
The Five CSGO Community Maps You Should Test

Aside from tactics, you can actually learn how to shoot better

Access to the pro’s tactics for free is a huge advantage and can help you improve as a player. Nevertheless, some people are not that good in CSGO, so they won’t be able to take advantage of those things. The good news is that those players can also watch and learn because they will see how pro players use their favorite weapons.

Everyone knows that the AK-47 and M4A4 are the most popular guns in CSGO, but not everyone can use them properly. Players new to the game will encounter all sorts of problems and have to spend a lot of time figuring out how to spray, when to tap fire, and so on. Luckily, they can shorten their learning path a lot simply by watching the best players in the world.

Of course, mimicking the same things they do is not easy, and you will probably need to spend a lot of time doing ot. Yet, it is usually worth it because you will save loads of time from having to figure out everything by yourself.

You will learn how to play better with the AWP

This point is specifically aimed at those who consider themselves to be AWP players. This is one of the weapons that attract loads of players because it is incredibly powerful and can one-shot any target. However, it is expensive and hard to master scares some people, which is why they focus on other guns.

Although watching professional AWP players won’t automatically make you better, it gives you a considerable advantage, mainly if you focus on the movement and positioning. You can’t get better at shooting, but watching the best AWP players will help you get better positions that will give you an advantage over your opponents, even if they are better than you.

Since the AWP is a more specific weapon, you need to watch at least a couple of players because people like s1mple have a different playstyle than most other top AWPers. Another thing to keep in mind is that you should try to watch the best players on as many maps as possible. The things that work on Dust 2 might not always work on Nuke and other maps, so keep that in mind.

You will learn how to use some utilities

After pointing out several important aspects, it is finally time to address the elephant in the room. One of the biggest problems for most CSGO players is related to using different utility items, such as Flashbangs, Smokes, and Grenades. Some of them have no idea how to make the most of these items, which is why they usually waste them for no reason.

Keeping a close eye on the best CSGO players in the world will allow you to learn loads of things about how and where to throw your smokes. You will also learn new Flash sports, as well as other things that will come in handy.

Remember that you will probably need to go through at least a few other guides to learn the ins and outs of everything you’ve seen. Fortunately, we have loads of different guides, including one that shows you how to throw smokes, so be sure to check it out.

Spectating the pros is fun

Last but not least, spectating the best players in the world is always fun, no matter which team you watch. Unless you are also a pro, chances are that those players are better than you. You can always learn something new. 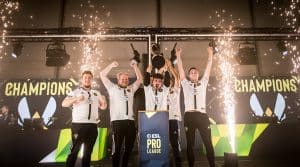