Slava Britvin
Slava "innersh1ne" Britvin is a CS:GO analyst and esports journalist. He currently performs as an analyst for mousesports & as a partnered author of CS.MONEY at ESTNN. You can learn more about Slava on our About page. Twitter @innersh1necsgo. 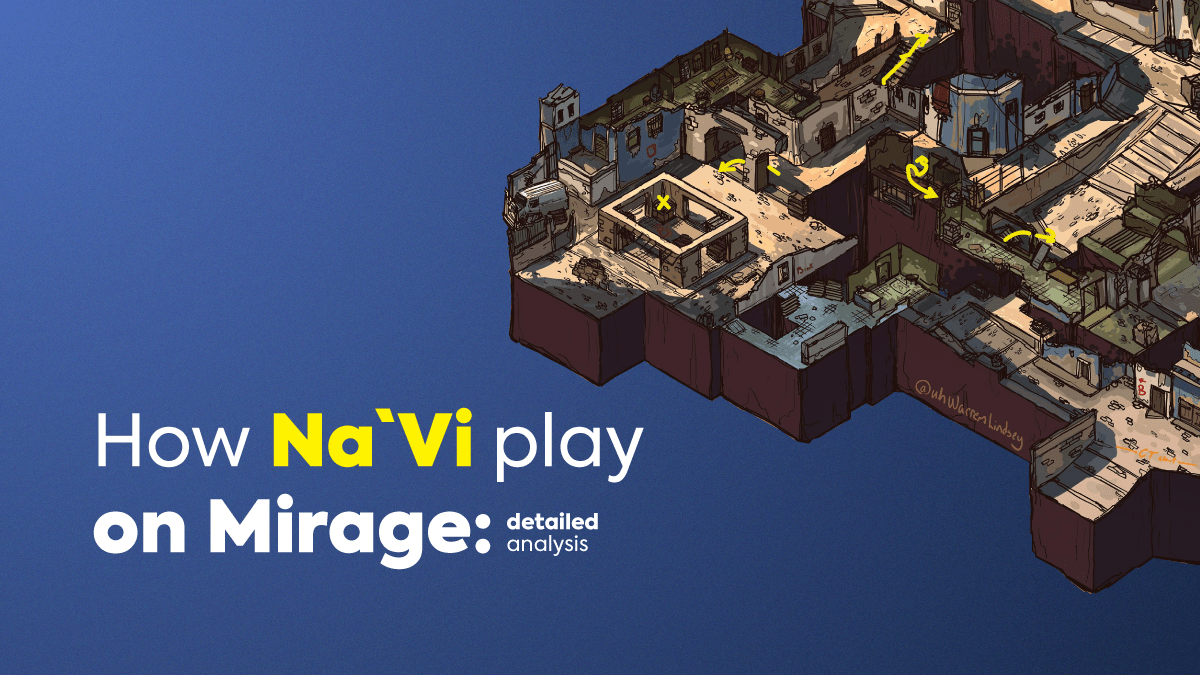 We breakdown how Natus`Vincere play on Mirage with a close look at their last five matches before the summer break.

Na`Vi is one of the most discussed and controversial teams in professional CS:GO. We take a peek at what makes their strategy so formidable.

1. Aggression and stacks on pistol rounds

Natus`Vincere don’t like to play passive defaults on CT-pistol rounds. In the last four out of five matches, Na`Vi played either stack on one of the sites (2 times 3B, 1 time 3A), and once they went out in aggression in mid.

We can see a similar pattern on forcebuy rounds: Natus`Vincere prefers to be active, instead of waiting for the opponents to reach one of the sites.
Overall, looking at their matches, Na`Vi will play passively on forcebuys less than 20% of the time.

We rarely see this among the tier-1 teams, but Natus`Vincere adhere to a clear structure regarding mid control. This is more a general trait of their play style than a strategic maneuver. Natus`Vincere have a habit of hard and very variable control of the mid: flash-peeks from different approaches, early AWP peeks, aggression at the beginning of the round — they make use of many available options.

But when Na`Vi are not going to fight for the mid, in most rounds, they'll probably fortify A-site. These can be different setups:  3A + 2B, or 3A + 1 mid/short + 1B. But over the last five matches, Na`Vi had less than three players on A-site in the mid-round. Only about 15% of weapon rounds.

S1mple, S1mple... an extremely aggressive sniper, which is very uncomfortable and unpleasant to play against, (and his flickshots are a separate topic.) As for the Mirage, you can often find S1mple at the beginning of the round on the short (through a jump from the window), or in the ladder room.

An interesting fact; for the last 5 matches, Na`Vi have never ended a forcebuy round as a fast A-site push. We wanted to find a clearer behavior pattern, but there was nothing to catch on to. Na`Vi alternate fast and slow force rounds starting the round with mid control, or just go to a fast push of B-site. But Natus`Vincere haven't made a single fast A-site execute over the last five matches.

On Mirage, Egor “flamie” Vasilyev plays as A-lurker on T-side. Most often, he can be found in palace (only in 5% of rounds, flamie plays on the ramp). This is information that can be used in game: for example, having information on the presence of players on the mid (and Natus`Vincere usually occupy the mid as 3 players) for slow rounds, you can try to push the ramp and T-spawn.

This is a small thing, but that’s important to know. There are teams that do not mind executing B-site only through apps even at the end of the round. There are teams that like to focus on B-splits with 3-4 players that go through short. Natus`Vincere never go full apps B-site execute without the presence on short in the mid-late round. Usually, they have 1 or 2 players that go through short.

It's worth nothing that Na`Vi have many moments while playing on Mirage that could be used against them by their opponents. Usually, tier-1 teams have fewer visible patterns to their play. That said these patterns are specific to Mirage — on other maps, Natus`Vincere's patterns and strategies are less obvious.