These are the best Fortnite Chapter 4 Landing spots, top spots to head to for anyone in each game no matter what type of start you want.

Fortnite Chapter 4 has introduced a brand new map. We’ve had long enough now to get to know it, and it has a lot to offer. Many players are still trying to find their regular drop and the best Fortnite Chapter 4 landing spots though. If you’re not yet set on a steady drop location, we’re going to run through all of the top spots to land this season.

The new map has quite a few different biomes and unique areas. Although, it also has the fewest POIs yet. The map features only nine named POIs. This can make your pick of landing spots in Fortnite Chapter 4 pretty important. You’re going to have more fights off spawn than before. Players heading for a named location with its extra loot are going to have much more competition. You’re going to be looking at high kill counts if you go for one of the best Fortnite Chapter 4 landing spots. Not everywhere is that competitive, though.

Alongside those spots, there are quieter areas. These are landing spots that aren’t named or, for some reason just don’t seem to attract as much attention. These can be some of the best Fortnite Chapter 4 landing spots.

We’ll run through some of the top places to land this season. If you’re looking for an action-packed opening, or something safer to just get looted up without a lot of danger, there’s a spot for everyone. Frenzy Fields is one of the more fun drops this season. In a lot of games, you’re going to find quite a few early fights here. At the same time, there are only a few specific buildings. However, these are fairly loot-dense. You’re not going to have to search for a while to get a basic loadout provided you land at a larger building. There are also plenty of slap juice barrels. They don’t give the most shield, but it’s a helpful tool for topping up if you’ve not found big and small pots.

You might have to fight your way through other players, but winning the POI is going to give you enough loot to be kitted up for the game. You can come out of these games with a decent kill count to get you started. Although, you’ve got to watch out for enemies when activating Fortnite Augments or to get up to full shields.

Frenzy Fields is more of an open-air area. While there are only a few buildings, there’s plenty of open space for fights. The loot is fairly contained here, too, so claiming the POI and getting everything tagged isn’t the most important here. It can really pay off if you’re looking for enemy locations to clear out the POI though.

Frenzy Fields is a great landing spot if you want a hot drop, especially if the bus route is heading over that way. It’s a good pick for the best Fortnite chapter 4 landing spots if you want early fights. 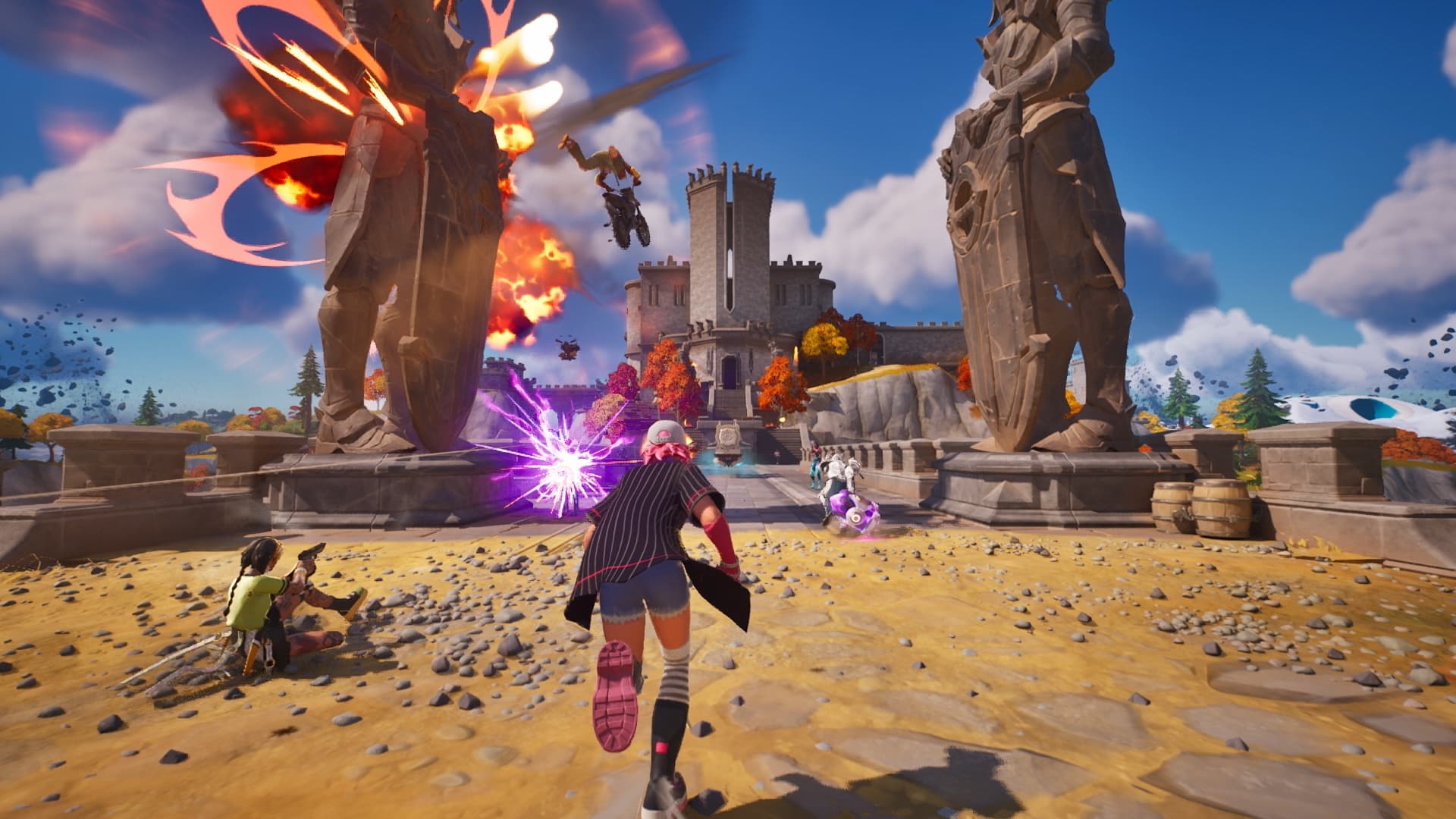 The Citadel is one of the most fun of the new POIs this season. It’s a tall building that gives a great vantage with a DMR. It’s a great spot for later circles, but there are some positives to landing here too. It can be one of the best Fortnite Chapter 4 landing spots. There are more high-powered white chests here. On top of that, though, it has one of the only Fortnite Chapter 4 Mythic weapons and boss characters.

The Citadel features a boss character that drops a Mythic Ex-Caliber and Shockwave Hammer. Between all of the chests here, too though, you’re likely to come away with a hammer. This is one of the most OP items this season. Players are usually going to be able to walk away with one of these, which should set them up for an easier game.

The Mythics aren’t the most powerful compared to some we’ve had in the past. Having an extra charge for your hammer is pretty useful, though. The Ex-Caliber can be a lot of fun if you’re enjoying it too. It might not be the most undisputed best weapon in Fortnite Chapter 4, but it can be a lot of fun. The Mythic isn’t the only reason to land here, but it’s a big bonus.

The regular loot is pretty dense here, too, so you’re likely to get some decent weapons. The inside of the Citadel is fairly easy to navigate if you’ve been around there a lot too. For some reason, this POI doesn’t seem to attract the same number of landings as others. Although, if it's early in the bus route, you should expect a few fights. If it’s not completely central, though, this is going to be on the quieter side of named locations. Lonely Labs is a fun POI that might be a good fit if you’re looking for a quieter spot here. This is located on the far edge of the map, at the very end of the snow biome. It’s a more familiar POI to players with buildings resembling old POIs and the research stations that have often popped up in the winter.

Lonely Labs features a decent amount of loot, to say how few buildings there are. It normally gets a few players or squads, but not really enough that you have to stress. It’s a good pick for a quieter choice in the best Fortnite Chapter 4 landing spot.

Lonely Labs isn’t going to be the spot for those looking for a major fight. It’s a quieter start to the game. A lot of the time, you may also end up needing to rotate a decent bit unless the circle falls over the snow biome. However, with all the launchpads dotted around the Brutal Bastion, it should be easy enough to get across the map in a decent amount of time. There are also updrafts at the top of mountains here which can also get you around quickly. If you get a decent mobility Augment too, there are no problems rotating around.

This is one of the top Fortnite Chapter 4 landing spots if you want the loot of a named location, but a bit of a quieter drop for action. 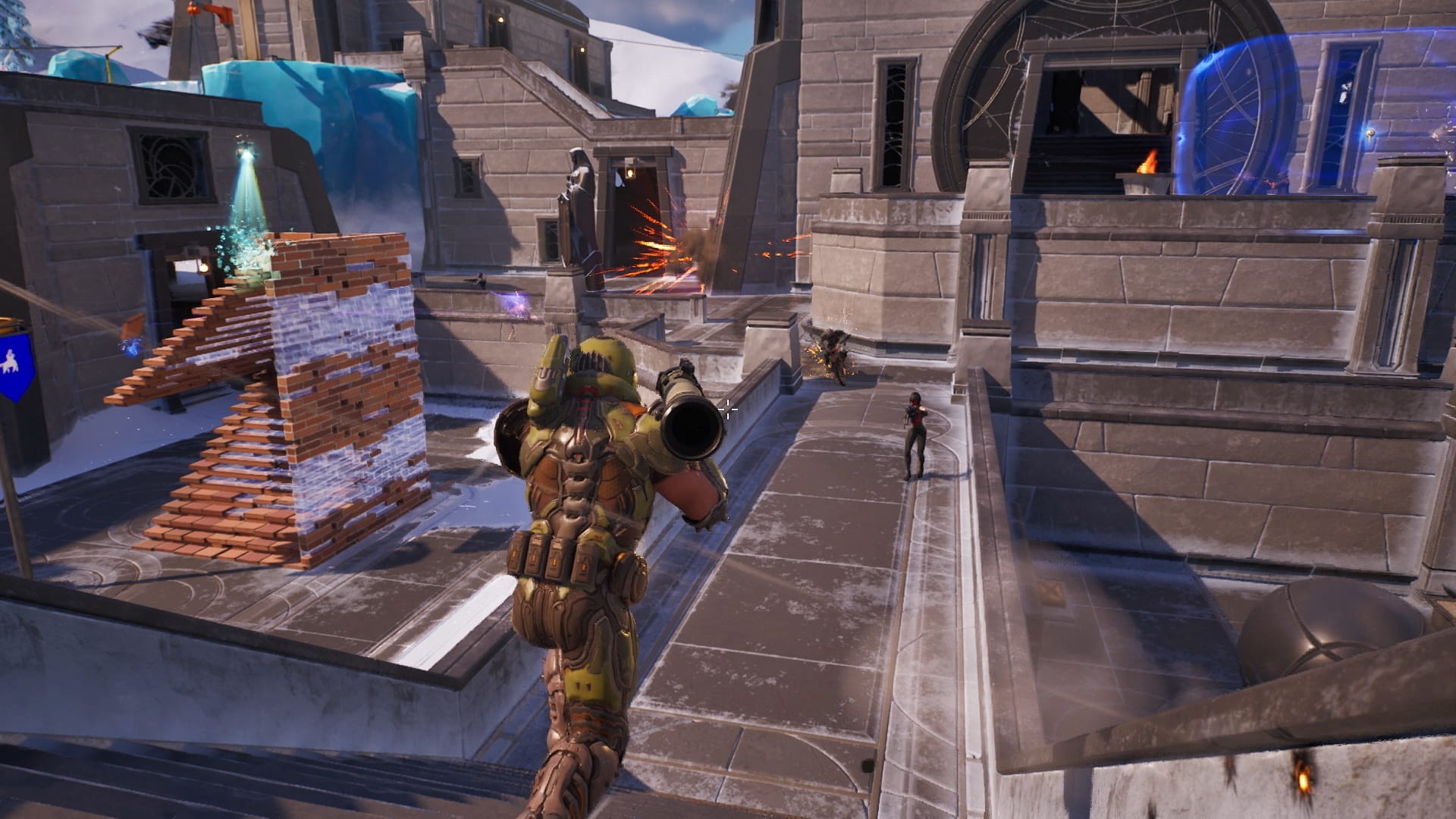 Brutal Bastion is another POI where you may have a bit of a fight, but it’s one of the better locations for loot and rotation at the start. This area features loads of loot in each one of the buildings. It’s also relatively easy to navigate, with chest spawns that you’ll quickly get used to.

Brutal Bastion features a launchpad to get away quickly. When you combine this with how relatively central it is on the map, you’re getting great rotation if you land here.

One thing worth keeping in mind is claiming that POI. It’s big enough with enough cover that claims it can provide a real advantage. There’s a lot of loot spread around the location. Multiple teams can land here, get their loot for the game, and possibly even slink away without getting into too many fights.

Brutal Bastion can be a bit more action-packed in some games. You can end up in quite a few fights if the bus route is moving in the right way, but equally, it can just be a few teams in other games. It’s definitely on the more popular side though, so keep an eye out for other teams.

If you want to land at Brutal Bastion without too many fights, there are smaller buildings off to the sides. These let you get a few weapons, usually without a fight. Once you’ve grabbed the basic tools of defense, you might be able to slip out once you judge how much action is going on at the POI proper.

This is a great middle ground between a slower start and a faster one. With its central location, too, it’s usually pretty central. This is one of the best Fortnite Chapter 4 landing spots.

Fault Splits offers some fun gameplay for fights with its split-up levels. There’s less loot on the higher level, but the natural advantage to having the high ground even in early fights.

This is one of the most central locations on the entire map, so rotation from here is going to be pretty simple. It doesn’t have natural rotation tools like guaranteed hammers or launch pads, but you can get to other POIs pretty easily with a car or lucking out with a shockwave hammer. Across all the chests, there’s bound to be a rotation tool in here.

This is a busier POI and you’re likely to get quite a few fights here. The loot trade-off is pretty decent, though and being in such a strong spot for rotation is going to pay off too.

This is a limited POI, but one that it’s nice to drop by while it’s here. The Christmas house appears on the map each Winterfest for Fortnite. It’s a fairly normal style house, but with a decent number of chests all located under the Christmas tree. It’s only a single building so it’s a relatively minor POI. It can have seven chests.

It’s definitely worth paying it a visit while Winterfest is active in the game, though. With the right chest spawns, it's one of the best Fortnite Chapter 4 landing spots. 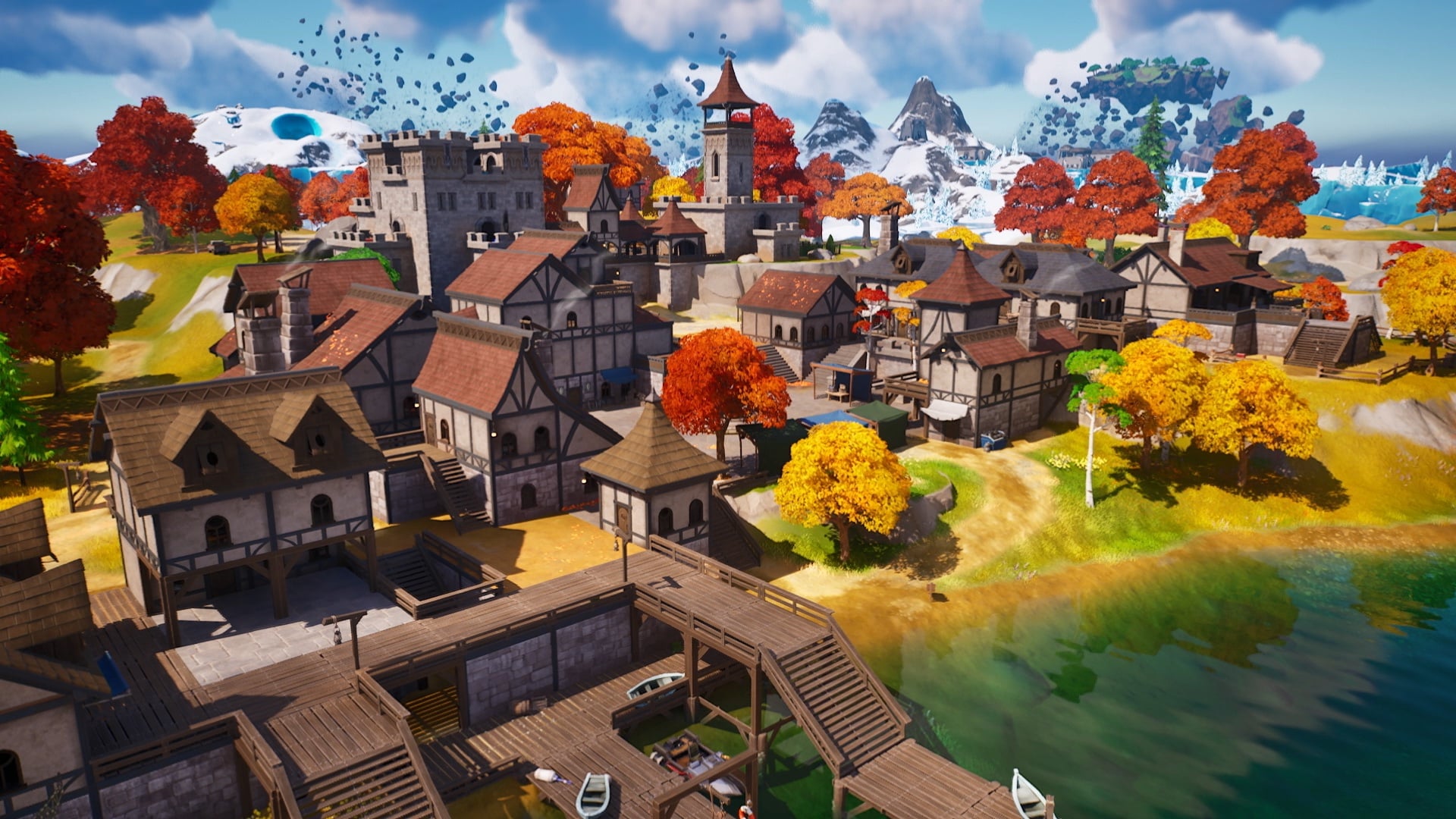 Anvil Square can be a bit of a hot drop in Chapter 4 Season 4. This is a spot that has more traditional house-style buildings. Although, they seem a bit more old-fashioned than the normal suburbs that we find in Fortnite. Anvil Square is close enough to the center for great rotation, and it has a decent amount of loot hidden away.

Anvil Square is likely to be a busier Fortnite Chapter 4 landing spot. There’s going to be a decent number of players landing here unless you get a particularly out-of-the-way bus route. The low buildings are set up for a fairly even fight. There isn’t a huge building with higher ground to give a clear advantage. It’s a test of skill with what you find on the base level.

Anvil Square is a fun spot to land, especially if you’re hoping to get some early fights in. There isn’t the most loot compared to previous picks on this list. However, it can be a lot of fun as a spot to drop into.

Each of these offers something unique. While we don’t have the abundance of POIs that the previous maps did, there is definitely enough going on that there’s a decent choice among the best Fortnite Chapter 4 landing spots. 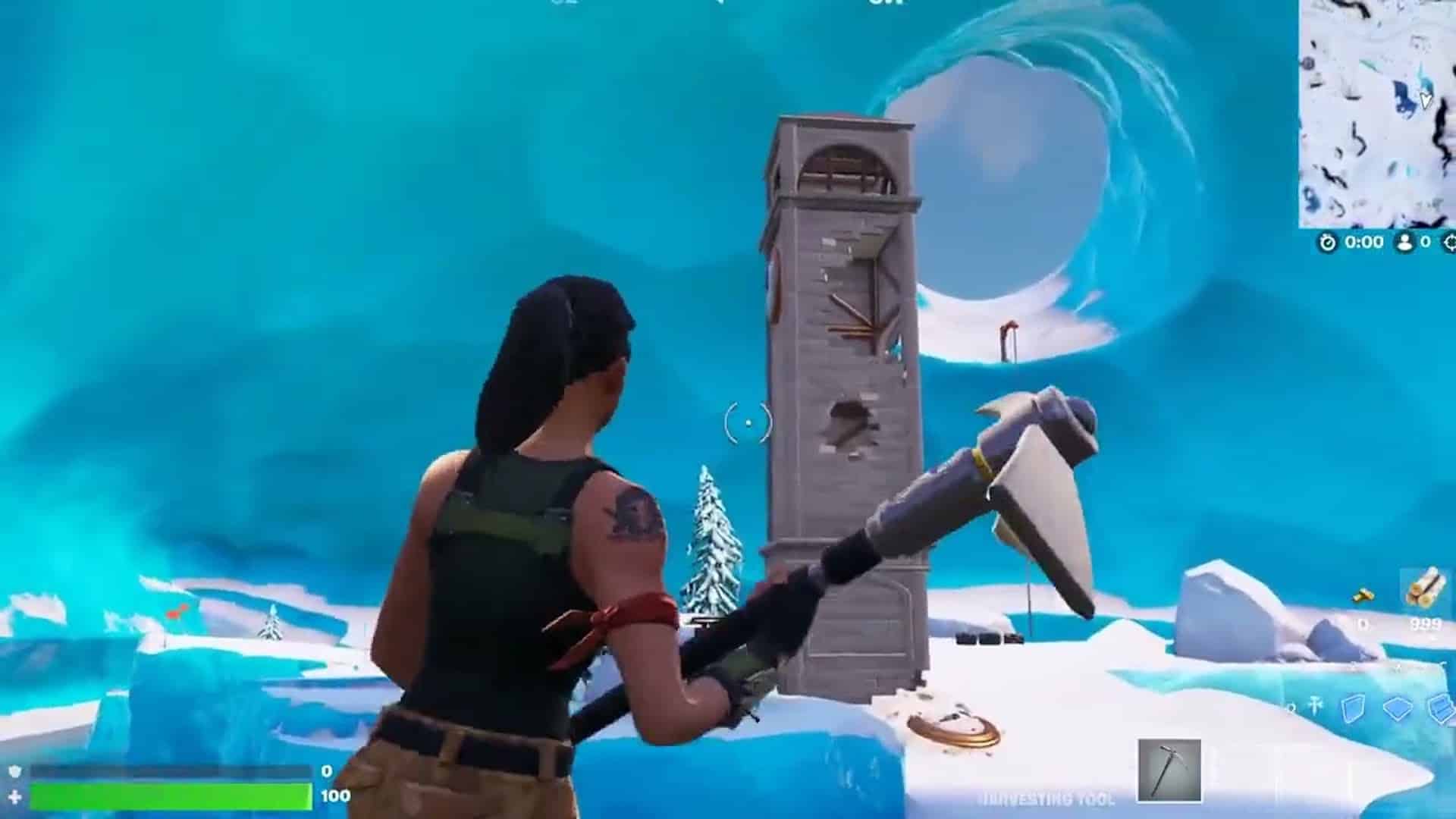 Tilted Towers isn’t on that list of the best Fortnite Chapter 4 Landing Spots and POIs, but is it coming back? There is a little hint that Tilted might only be temporarily out of the game. The area with a large snow hill behind Brutal Bastion currently has an interior cavern, revealing the entire hill to just be a frozen-over bit of map.

Inside that cavern is pure ice, but one building is tall enough to be poking up over the top of the ice. The clock tower from Tilted Towers is very clearly located here. It seems like the POI may have survived the Fortnite Fracture event after all! Players will have to keep an eye out to see if Tilted Towers is going to be making a return to the game in Chapter 4.

Most places on the map are dotted with enough of the more minor landmarks that you’ll typically be able to find enough loot to get started up. These are some of the best Fortnite Chapter 4 landing spots to pick, where you will typically find a bit more to open up than just a few standard chests.