Dota 2 players can use these strategies to learn how to play Bloodseeker in Diretide matches with the Battle Pass 2022.

People with the Battle Pass 2022 are spending hours of their time playing Dota 2 to unlock exclusive rewards. These rewards can be gained by obtaining bonus battle points for each game that you play. You can also earn additional battle points by completing Weekly Quests and finishing Cavern Crawl challenges.

These treasures contain a number of stunning skins for dozens of heroes in Dota 2. The Bloodfeather Finery set for Queen of Pain, the Hides of Hostility set for Huskar, the Jewels of Anamnessa set for Medusa can be acquired by opening these exclusive treasures that are available with the Battle Pass 2022 till January 12, 2023.

Diretide is the most recent game mode that can be played with Part II of the Battle Pass 2022. You can attack Greevils around Roshan to collect Taffy in Diretide mode. The new seasonal game mode requires players to score Taffy in enemy wells to win the game.

Roshan will seek out the well with the most Taffy scored in it to destroy it. The first team to get Roshan to destroy all 4 enemy wells will be victorious in Diretide mode. Players can ride different mounts to move across the map. Take a look at how you can play Bloodseeker in Diretide matches to help your team win.

How to Play Bloodseeker in Diretide 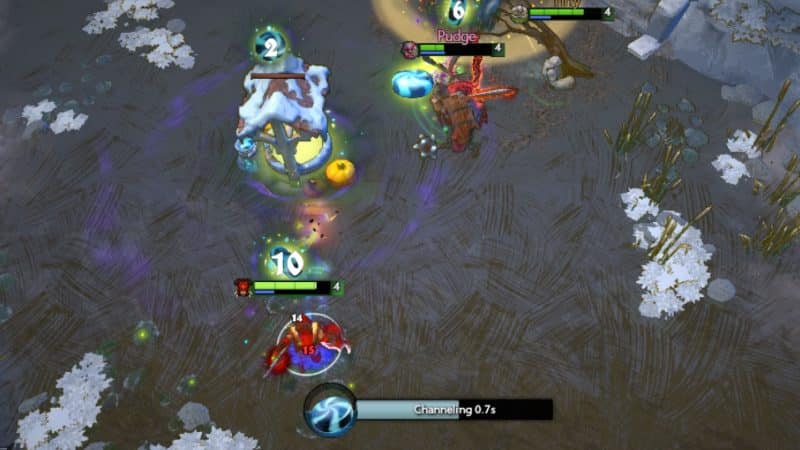 Bloodseeker is an Agility hero who can strike fear in the eyes of his opponents in Dota 2. He has an exceptional attack speed that can be used to attack more Greevils for collecting Taffy. The melee hero can use his abilities to prevent enemy heroes from casting spells and decrease their chances of fleeing from battles.

The Agility hero has a base armor of 5.7. The increased armor lets Bloodseeker tank incoming damage from enemy heroes, neutral creeps, Greevils, and Taffy Guardians in Diretide mode. You can level up faster by killing the neutral creep camps that are scattered around the Diretide map for additional gold and experience.

The melee hero can use Blood Rite to silence his enemies in Dota 2. Blood Rite can be cast on a large area of 600 to deal 240 Pure damage to his opponents. Enemy units that are affected by Blood Rite lose their ability to cast spells for 6 seconds. Blood Rite has a cooldown of 12 seconds and requires 120 mana in the game.

You can use Blood Rite near Taffy Guardians to silence foes before depositing Taffy in enemy wells. It can take up to 2.9 seconds for Bloodseeker to cast Blood Rite on an area on the map. You can also use Blood Rite on Greevils to have tons of Taffy dropped by them within seconds. Players can increase the damage dealt by Blood Rite through the Talent Tree at level 15.

Players will be able to chase down enemy heroes in Diretide mode by leveling up Thirst. People who are playing Bloodseeker gain full vision and True Sight of enemy heroes after their health drops below 25%. The passive ability, Thirst, allows Bloodseeker to regain a portion of his max health after killing an enemy unit in battle. You can increase the max movement speed bonus of Thirst at level 25.

Bloodseeker’s ulti, Rupture, can be cast on enemy units to prevent them from running away from team fights. You can use Blood Rite right after using Rupture to silence enemy heroes in Diretide mode. Enemy heroes affected by Rupture take 55% of the distance moved as Pure damage.

Rupture has a cast range of 800 and lasts for up to 12 seconds in the game. It has a cooldown of 70 seconds and needs 200 mana. Rupture gains an additional charge at level 25 through the Talent Tree.

Items to Buy for Bloodseeker in Diretide 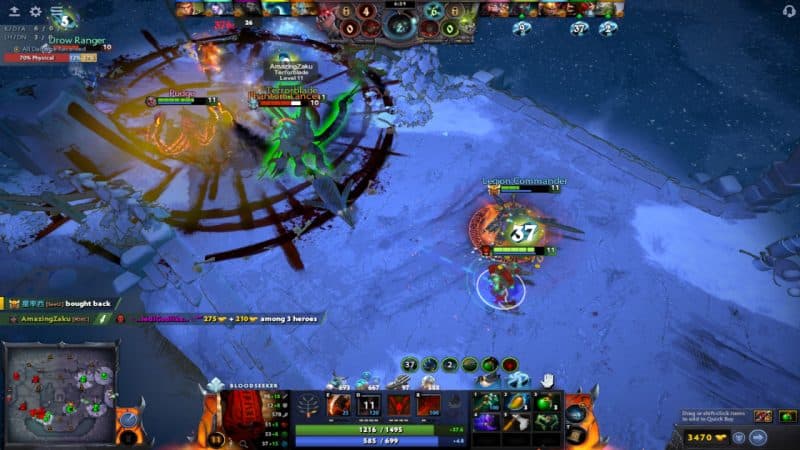 People can use Force Staff to push any target unit forward for a distance of 600 In the direction that they are facing. Force Staff has a cooldown of 19 seconds and consumes 100 mana in the game. The item costs 2200 gold and can be upgraded to Hurricane Pike.

Blade Mail can be purchased for 2100 gold. Bloodseeker gains 28 attack damage and 6 armor by purchasing Blade Mail. You can activate Blade Mail to return up to 85% of incoming damage back to enemy units for 5.5 seconds. It has a cooldown of 25 seconds and requires 25 mana.

Bloodseeker can win many team fights early in the game by using Blade Mail. You can activate Blade Mail while attacking enemy units inside the Blood Rite to sustain damage longer from your enemies. Blade Mail can also be used after using Rupture on opponents to return damage while they are unable to flee from the battle.

Diffusal Blade is an item that can be bought for 2500 gold in the game. Bloodseeker gains 15 Agility and 10 Intelligence by equipping Diffusal Blade. Physical attacks from Bloodseeker can burn up to 40 mana per hit.

Players can use Inhibit by purchasing Diffusal Blade in Diretide mode. Bloodseeker can slow the movement speed of enemy heroes by 100% for 3 seconds after using Inhibit on them. Inhibit has a cooldown of 15 seconds.

Bloodseeker can deal bonus damage with his attacks by purchasing a Skull Basher in Diretide mode. Skull Basher grants 25 attack damage and 10 Strength to the melee hero. The item costs 2875 gold in the game.

The Agility hero has a 25% chance to stun enemy heroes with every physical attack. Enemy units stunned by Skull Basher will be disabled for 1.5 seconds and take 100 bonus damage. You can upgrade Skull Basher to Abyssal Blade for bonus health.

Bloodseeker can use Echo Shell after purchasing a Lotus Orb to reflect magical spells back to the enemy hero who cast it. Echo Shell can be activated for 6 seconds. It has a cooldown of 15 seconds and needs 175 mana in the game. 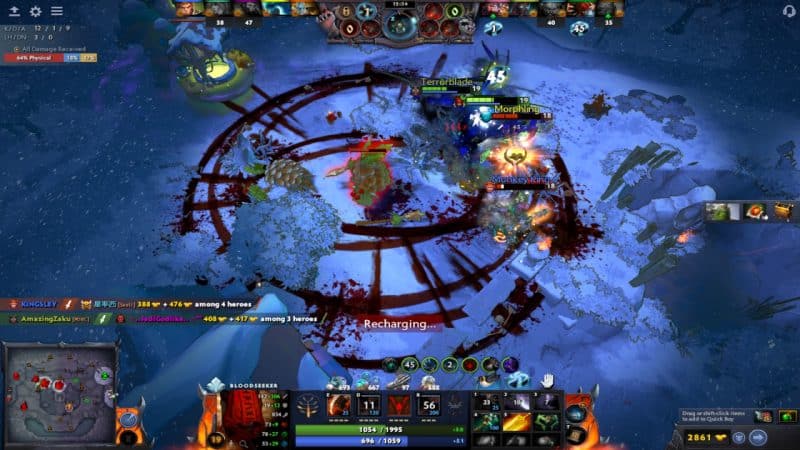 Radiance is an item that provides 60 attack damage and 15% evasion to the Bloodseeker. The melee hero gains Burn aura by equipping Radiance. Burn aura deals 60 magical damage to enemy heroes in a 700 radius. Radiance can help Bloodseeker deal more damage while hunting heroes with Thirst in Diretide matches.

Best Allies for Bloodseeker in Diretide

Centaur Warrunner is a durable tank hero in Dota 2. The Strength hero can smash the ground with his hooves to stun enemy heroes in battles. He can use the Strength gained in the game against his opponents to deal magical damage to them.

Allies playing Centaur Warrunner can nuke enemy heroes with Hoof Stomp to prevent them from collecting Taffy and scoring them in your wells in Diretide games. Hoof Stomp deals 300 damage and stuns all enemy units in a 350 radius for 2.6 seconds. It has a cooldown of 12 seconds and consumes 130 mana.

Teammates can use Double Edge after stunning enemy heroes to deal a base damage of 300 to them in battles. Enemy units affected with Double Edge can take up to 120% of the Centaur Warrunner’s Strength as bonus damage. It has a low cooldown of 4 seconds and does not need any mana to be cast in the game.

His ulti, Stampede, can increase the movement speed of Bloodseeker while attacking enemies in Diretide mode. Stampede provides maximum movement speed to all allies for up to 4.5 seconds. It has a cooldown of 100 seconds and needs 250 mana.

Dark Willow is an Intelligence hero who can root multiple enemies and disable them in Dota 2. She can use her abilities to help Bloodseeker get more kills in Diretide mode. The ranged hero can become invulnerable to physical attacks, letting her score Taffy easily in the game.

Bramble Maze has a cooldown of 20 seconds and consumes 160 mana. Bloodseeker can use Rupture to paralyze enemies while Dark Willow destroys them with Bedlam in the game.