As people start to hit 70, earning a reputation becomes all the more important. We designed a guide to help you maximize those gains as much as possible.

It’s fair to say that one thing Classic does a lot is reputations. From Aldor and Scryer, to Lower City and Hellfire Citadel reputations to get into Heroic dungeons. A lot of good content is hidden away behind these mysterious factions; but if you’re level 70 you’re in a prime position to take advantage.

If you’re lucky enough to read this before you start leveling, then you’re in luck. Our leveling guide goes over it in more detail here, however, the TLDR is that you want to maximize your reputation gains with the four Heroic dungeon factions: Honor Hold/Thrallmar, Cenarion Expedition, Lower City, and Sha’tar. You’ll do this by doing the associated dungeons until you reach friendly 5999/6000. Once that’s done you can either move on to the next reputation or level in the zone of that faction.

If you’ve leveled to 70, and now need reputation there’s a few things you can do. Firstly we want to focus on getting the Heroic dungeon factions to revered. The best way to do this is to clean up any missed quest with that faction. Wowhead has a quest list for each faction, an example of Lower City is here, though this method can be messy and hard to track. Next up is the addon solution, and that’s where Reputable comes in handy. Previously the addon did what you can see above; it would list all the factions and tell you what repeatable quests or available quests you could do. However, the addon recently got a huge update that added a feature we’ve been crying out for. Reputable will now display in the quest log the amount of reputation a quest will give with a faction (shown below). Now, you can simply find all the quests that offer the reputation you need, and make sure you’re focused on the ones you want to focus on. 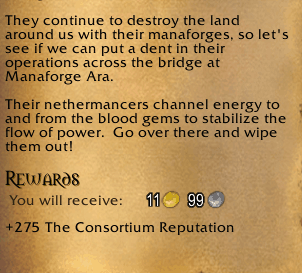 How to get Exalted

With no quests left it’s time to grind to Exalted. While 21k reputation is a daunting prospect, it will go fairly quickly once you get into Heroic dungeons. Thankfully, these can offer between 1.5 to 2k, Shadow Labyrinth, the Lower City dungeon is great for this. Offering 2k reputation for a full clear (2,2k for a Human). Another good idea is to pick up the daily heroic dungeon quest, offering around another 300 reputation with the associated dungeon.

As for what reputation to get Exalted with first, the best bet is to download an addon such as AtlasLoot Enhanced. With this, you’ll be able to see the rewards offered by each faction and focus on the items you want first. Note that most factions at Exalted will offer either Best in Slot (BiS) items or BiS crafting recipes.