Which top trios will be moving on to the $100,000 GlitchCon Finals?

Teams earned points based on their performance across each six-round Marvel Knockout match. The team with the most eliminations at the end of each game claims victory. After this session, the top six trios will advance to GlitchCon, where they will compete for nearly $100K USD in prize money against “GlitchCon Super Teams.” Personalities such as Ninja, NickEh30, Bugha, Tfue, and more are waiting in the GlitchCon finals for the top six teams.

Cloud9 players Ryan “Chap” Chaplo and Noah “Vivid” Wright, FaZe Clan’s Nate Hill and TSM Commandment were just a few of the many marquee names involved in this qualifier. Casters for the evening were Goldenboy, SanchoWest and WavePunk. Even the Fortnite icon Tyler “Ninja” Blevins joined in on the action. Let’s see how the results played out as The Road to GlitchCon continues. 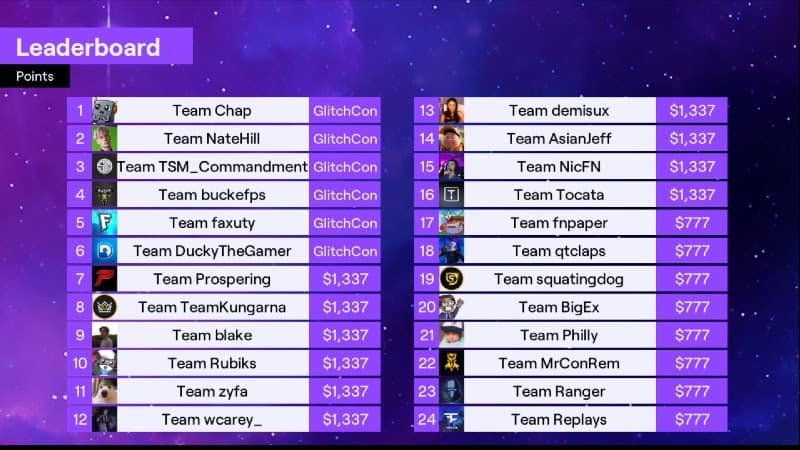 The team of C9 Chap, C9 Vivid and OA Whofishy topped the leaderboard after the competition came to its conclusion. FaZe Clan’s Nate Hill and Twitch streamers Euzey and SkivexFN grabbed a second-place finish. FNCS Chapter 2 - Season 4 Finalists TSM Commandment, NRG Edgey and Liquid Cented rounded out the top three. The top six trios from today’s competition will move onto the GlitchCon Grand Finals on November 14. Those who finished outside the top six managed at least some cash for their efforts over the five-hour competition.

Here are the top six teams in full that will be moving on to GlitchCon featuring Fortnite:

The GlitchCon Grand Finals will utilize the same Marvel Knockout game mode and scoring system. In total, 16 teams will compete in the Grand Finals, with over $23K USD going to the winners. Visit this link to see all details for the Twitch Rivals: GlitchCon Super Team Showdown ft. Fortnite.