ESTNN interviews Anne Fish — the mum of Fortnite pro benjyfishy — who recently published a book about her experiences alongside Benjy; from his childhood through online fame.

The evolving game of competitive Fortnite features many of the world’s most talented players. It’s a challenging task—mastering the art of building, editing and understanding critical game mechanics. Few can do it better than European player Benjy “benjyfishy” Fish. A player for NRG Esports, benjyfishy is a two-time Fortnite World Cup Finalist and nine-time Fortnite Champion Series (FNCS) Finalist. Benjy is more than just a talented Fortnite player. With an average Twitch viewership of between 10K to 15K viewers per stream, it’s an understatement to call benjyfishy a star.

The people behind the players in esports rarely see the light of day. In Benjy’s case, his mother Anne “mamabenjyfishy” Fish is becoming a star herself. An advocate for parenting in esports — Anne has supported her son every step of the way from early childhood to the present day, where Benjy is one of Fortnite’s most recognizable names. Anne’s experiences as the woman behind the Fortnite star inspired her to write a book.

Anne wrote the book — called Let’s Go — covering her life alongside Benjy; from the early days through his many historical achievements in competitive Fortnite. Let’s Go is available to purchase now on Amazon. ESTNN had a chance to ask Anne some questions about the book. As well as her recent signing with an esports organization and much more!

The Inspiration Behind “Let’s Go” 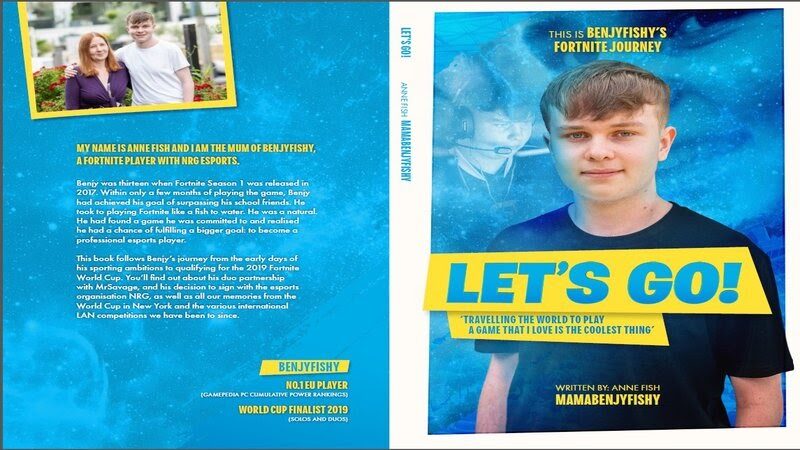 What inspired you to write a book about your journey alongside Benjy from his childhood until now?

When I first joined Twitter, Benjy’s fans would ask me about his life and his family, and how he became so successful. I realised there was an interest from the esports community to hear his story. Then lockdown happened and all the planned LAN tournaments were cancelled and I suddenly had time to write it. It was clear that Benjy’s journey to becoming a pro-Fortnite player was a whirlwind and so much happened in a short amount of time – I wasn’t short of content.

What are you hoping people learn from the book that they can apply to their own lives?

I hope that readers appreciate how much hard work, dedication and skill it takes to become a pro-player like Benjy. Gaming offers many transferable skills such as strategy, leadership and communication skills, which can be used in other aspects of their lives.

Benjy and his older brother Charles clearly have a close relationship. How has that dynamic evolved over the years from their childhood to the present day?

Yes, Benjy and Charles have always been close and this has remained, as they have got older. Charles was instrumental in getting Benjy involved in gaming and they continue to play online together although mainly World of Warcraft (WoW). They chat regularly as well as meeting up in London to go shopping and for events, which as a parent is great to see.

Many people fail to reach the level of stardom that Benjy has. What do you think sets Benjy apart from those that try but fail to find success in competitive gaming?

Benjy is very determined and committed to achieving his goals. He didn’t achieve his success overnight – he just took all the opportunities he was given in the early days and kept grinding. He loves playing Fortnite and his success is just a product of his passion for the game.

You’ve been grinding Arena Mode and streaming Fortnite for some time. What have you come to learn and appreciate about the game as a player yourself?

I’ve learnt that playing Fortnite is a lot harder than the pros make it look and streaming makes things more challenging, as you are having to multi-task, which isn’t always easy. You have to put in a lot of hours to try and get to even a basic level and I still have a long way to go. Playing Arena and Competitive tournaments has given me a new appreciation of the world of a professional esports player.

What do you hope to achieve by putting time into Fortnite i.e. playing Arena Mode, tournaments and competing at the upcoming DreamHack LAN?

I really enjoy playing competitive tournaments, and I am working hard to improve and advance my skills as a player. I would like to prove that I can get to a level where I can qualify through the open rounds of tournaments to the Finals. I’m also looking forward to playing at upcoming LANS and connecting with the esports community.

Has Benjy given you any pointers on how to improve as a player since you started streaming and playing in tournaments? If so, what has been the most helpful?

Benjy gave me some initial help when I first started playing, but mainly he has left me to learn on my own. I work with Bella, who is my duo partner, as well as my online community to help me improve.

You recently signed with the Galaxy Racer (GXR) esports organization. What led to your decision and what are your goals as part of the team?

I am passionate to show parents that age is just a number and that you can have fun gaming and streaming even if you are not a teenager, as well as highlighting the fact that there are transferrable skills that their children are learning whilst gaming; e.g. teambuilding, leadership, communication, multitasking to name a few. I have been playing Fortnite and streaming for around nine months and it was a natural progression to look for an esports organisation to represent. Having spoken to several organisations, Galaxy Racer (GXR) shared my goals to help connect with both parents and players; as well as supporting me in my competitive endeavours.

Words of Guidance & Goals for the Future

What advice would you give to a parent whose child wants to pursue a career in esports?

Try and find out more about esports and the career options available within the space.
There is a whole infrastructure around the industry, it is not just about being a professional player. You can work in any number of areas including for example content creation, social media, marketing, and the production side including management. There are courses now available worldwide including esports degrees, and in the USA you can get full esports scholarships. This is one of the reasons Johnny (MrSavage’s Dad) and myself wrote BuildIt like benjyfishy and MrSavage, which is a guidebook for parents, aspiring players and those interested in working in the esports space. It offers more information about what opportunities are available and explaining what is actually involved when you are an esports professional.

As a parent, how do you manage Benjy’s schedule and prevent him from burning out?

As with any sport or discipline it is all about balance, making sure that they have time away from the game so do other activities is important. Benjy enjoys socialising and goes out regularly with his friends, which helps with this. Also keeping healthy habits including regular exercise, making healthy food choices and getting enough sleep is important.

Have you noticed a change in Benjy’s enthusiasm for Fortnite since he started playing at such a young age?

No, Benjy is still as enthusiastic about Fortnite which is a testament to Epic Games and the creators who keep the game fresh so that playing it is enjoyable.

What are your and Benjy’s goals for the year 2022? What would you like to see out of Epic Games and Fortnite?

We are all waiting for Chapter 3 to launch, which is very exciting. It would be good to have a completely new map with brand new POI’s to explore. Epic Games have started to allow LANs to come back so we are both looking forward to the opportunity to travel in 2022.  Benjy is hoping for a World Cup announcement but we will have to see if that happens.   FNCS and competitive in 2022 is going to be Duos and Benjy is aiming to become FNCS Champion. Personally, I am looking to improve my skills to be able to compete and qualify through the open rounds.

We’d like to thank Anne for taking some time out of her busy schedule and the Arena Mode grind to answer these questions. Please, give her a follow at her social media links below and check out her book “Let’s Go” on Amazon today!