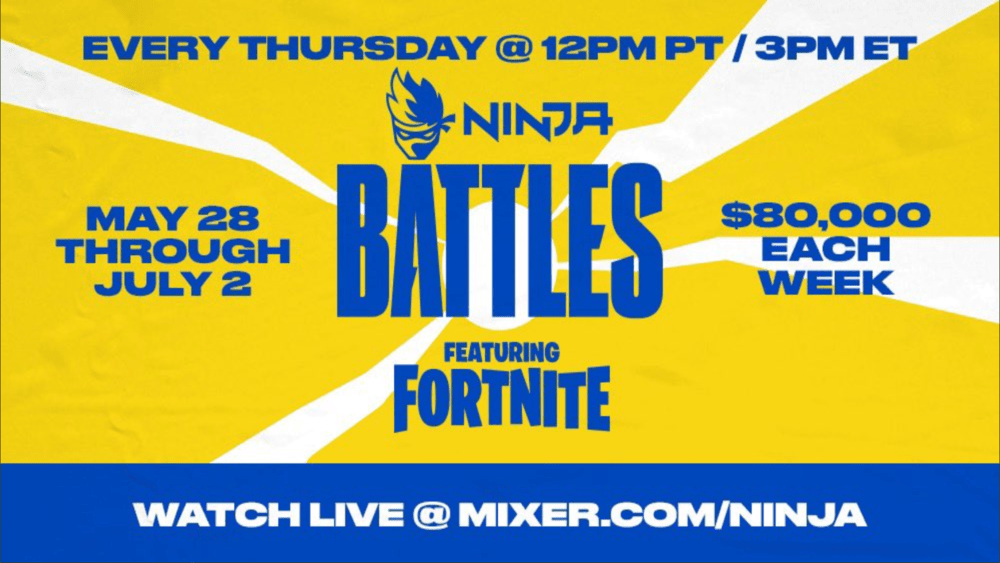 Ninja is in the tournament business, hosting his own $80,000 weekly Fortnite tournament.

Tyler "Ninja" Blevins is one of the most popular video game streamer in the world. He gained unprecedented popularity back in 2017, mainly playing the popular Battle Royale title Fortnite. Before moving to Microsoft's Mixer platform, Ninja became the most followed streamer on Twitch with nearly 15 million. He then signed a deal with Mixer, bringing arguably the world's most iconic Fortnite player to their side. Today, the Mixer superstar and worldwide sensation announced a partnership with Fortnite to broadcast a multi-week event with over $400K USD in cash prizes.

The tournament, dubbed Ninja Battles, will feature multiple Fortnite players and personalities across both Mixer and Twitch. Ninja announced the event on his Twitter account earlier today.

"I'm excited to announce Ninja Battles! An online Fortnite invitational series featuring six events across May - July, each with an $80,000 prize pool. Starts tomorrow Thursday, May 28 at 12 PM PT / 3 PM"

An $80K USD prize pool is up for grabs each week for the next six weeks. The event will take place every Thursday, beginning tomorrow May 28 and ending on July 2.

Players and Personalities Involved in the Event

Ninja Battles will feature a blend of professional Fortnite players and personalities across multiple streaming platforms. This invitational will feature Ewok, Nate Hill, Reverse2k, Nick Eh 30, Ship, Fortnite World Cup Champion Bugha and many others. We do not have a full list of the participants but expect to see a full lineup before the event's kick-off tomorrow afternoon. Professional Fortnite casters Ballatw and MonsterDFace will commentate the tournament for the ensuing six weeks of competition.

Ninja has not disclosed a particular format or scoring system for Ninja Battles at this point. This tournament will be the first trios event since Season X. Popular Twitch streamer Nick Eh 30 announced that he would be competing in the Ninja Battles event with FaZe Replays and coL Punisher. This event comes after Fortnite's official broadcast recently announced that the Arena formats would add trios to replace duos in Chapter 2 Season 3. Ninja Battles will be an opportunity for players to ready themselves for what's ahead.

With $80K USD on the line each week, competitors will want to put forth their best effort to take home a piece of that outstanding prize pool. You can catch the tournament tomorrow, May 28 beginning at 12 PM PST and 3 PM EST on Ninja's official Mixer channel. Each participant will broadcast their points of view from their respective streaming outlets.

Stay tuned to ESTNN for continued coverage of Ninja Battles and other Fortnite news!