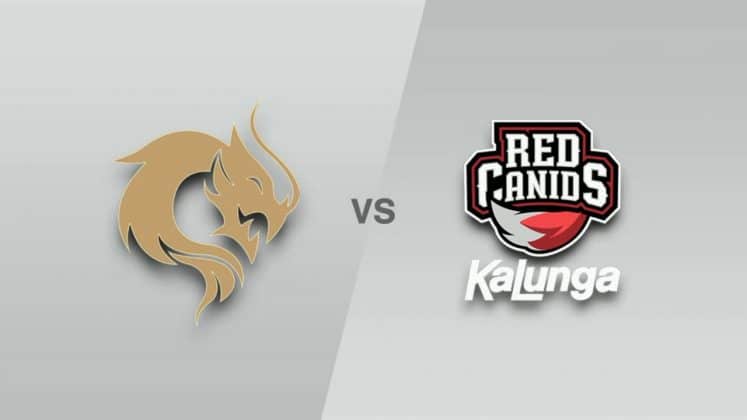 With their backs against the wall, PEACE and RED Canids fought to advance to the next stage of Worlds 2021.

After three days of intense competition, the 2021 LoL World Championship Play-in Stage has advanced to the Knockouts. Here, teams engage in best-of-five series to fight their way to the Main Stage. In the midst of a close five-game matchup between Beyond Gaming and Galatasaray Esports, Oceania's PEACE and Brazil's RED Canids were up to bat. In their previous Group Stage match, PEACE came out on top, but with the world watching, both teams were eager to prove themselves today! 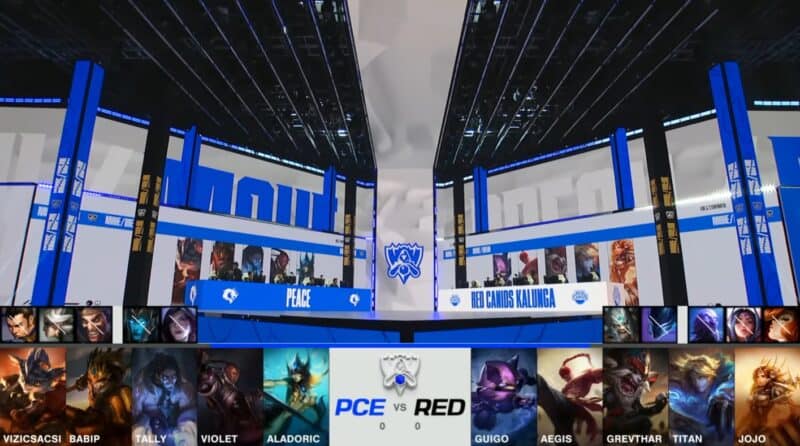 In the opening games of the series, both teams wanted to get off on the right foot. It was PCE who did just that, as at two minutes, the bottom lane duo went all-in, going up two-for-one in kills. After that, a chaotic team fight erupted around the dragon, where RED overextended on the back end of the play and let PCE win it overall, three-to-two in kills. Afterward, Babip helped his team get more on the board when he ganked top to kill Guigo.

Though the early game was in PCE's favor, RED wouldn't stay silent for long. At 14 minutes, TitaN killed Violet in the 2v2 bot, then helped his team win a crucial 16-minute fight, which allotted them three kills for only one, as well as an Infernal Dragon. Two minutes later, PCE struck back with a winning fight of their own, and the game turned into a bloodbath. When Baron spawned, PCE managed to pick off two from RED, then two more, but not the Baron.

Coincidentally, two minutes later, the pendulum swung back into RED's favor. On the back of TitaN's Ezreal, who had a stellar game altogether, RED swept four PCE members off the map and attempted Baron. But thanks to heroics from Vizicsacsi, RED couldn't secure it. That was fine for RED though, as at 29 minutes, RED found two more kills which translated to a clean Baron. Unfortunately for PCE, they lost their support in the side lane when RED collapsed on Aladoric, which led to a full snowball push from RED that ended in PCE's Nexus in shatters and RED's series score up 1-0. 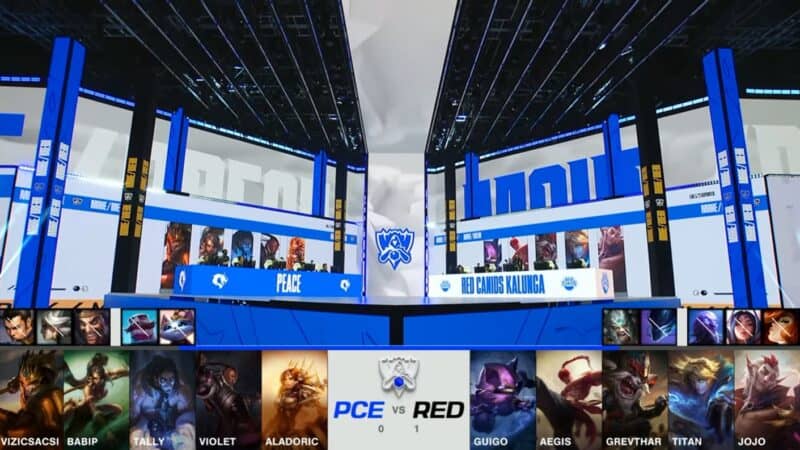 Running back similar team compositions, RED wanted to quickly bring this series to match point but PCE wasn't having any of it. The bottom lane saw the first action again, as Violet killed TitaN for First Blood but lost Aladoric to Jojo. At the same time, a fight was happening in the top side jungle, where Tally rotated to kill Aegis. Shortly after, Vizicsacsi ended up getting a kill onto Guigo too. Fists were bring thrown and things were certainly ramping up.

PCE did manage to secure a more sizable lead when they slew Rift Herald and used it to claim the First Tower bonus top lane. At 13 minutes, RED caught out Vizicsacsi in the top lane but PCE capitalized on RED being top by diving bottom and getting three kills in the end. Now, PCE was off and running. At the 17-minute mark, PCE killed Grevthar then used the previously taken second Herald to take two towers and open the top Inhibitor, though they didn't destroy it.

RED did try to gain some pressure back by picking off Aladoric, however, it wasn't really enough at this point. That's because at 21 minutes, PCE was in a prime position and forced a fight onto RED.Here, PCE killed four from RED, which allowed them to take a dragon. Only two minutes later, Vizicsacsi solo killed Guigo, and seeing their opportunity, PCE rushed and secured Baron after killing Aegis too. With this Baron, all PCE needed was one more fight to Ace RED and push straight in for the win. 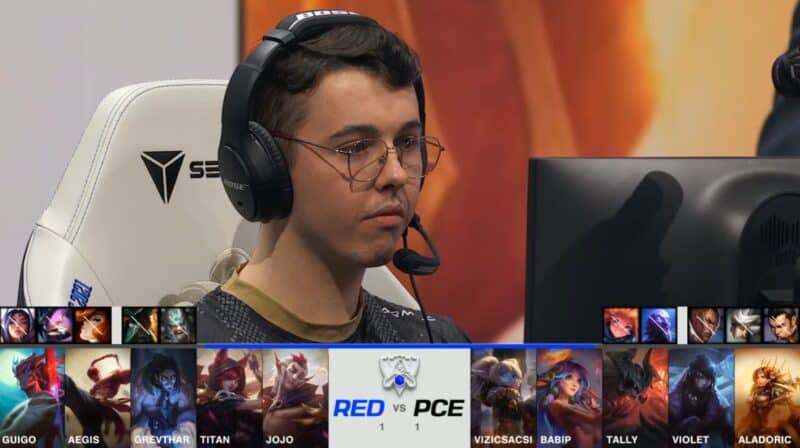 Finding their stride, PCE carried their momentum from Game Two into Game Three. Of course, the bottom lane was the focus of early action, as Aladoric killed TitaN for First Blood in the isolated 2v2. At six minutes, RED secured the first Infernal Dragon, but PCE looked top side. Here, a prolonged skirmish broke out where PCE eventually walked away with two kills worth of gold. A couple of minutes later, PCE found a kill in the mid lane while Aegis helped Guigo kill Vizicsacsi top to even that out.

Regardless, PCE was still slowly inching ahead of RED. To further that, PCE took the Rift Herald, which was useful for taking down the mid tower for First Tower bonus. However, it wasn't all clean for PCE, as RED did find a three-for-one team fight win at 13 minutes out of nowhere. Fortunately for PCE, they weren't discouraged and kept up the pressure. In the next few minutes, they secured a few objectives, though RED went toe-to-toe with them at 17 minutes. During a wild team fight, PCE was ahead but chased too far and gave kills back to RED, meaning it ended up being four-for-four in kills.

After this, there were a couple of picks, although nothing major happened. That was until 22 minutes. At this point, a team fight exploded in the river, but PCE quickly found themselves on top. They killed all five RED members and claimed the Baron as a prize. Utilizing two lanes of pressure, PCE blew through the bottom and mid Inhibitors, pushed forward and forced one last fight. As four members of RED looked at grey screens, PCE smashed RED's second Nexus to bring the series to match point. 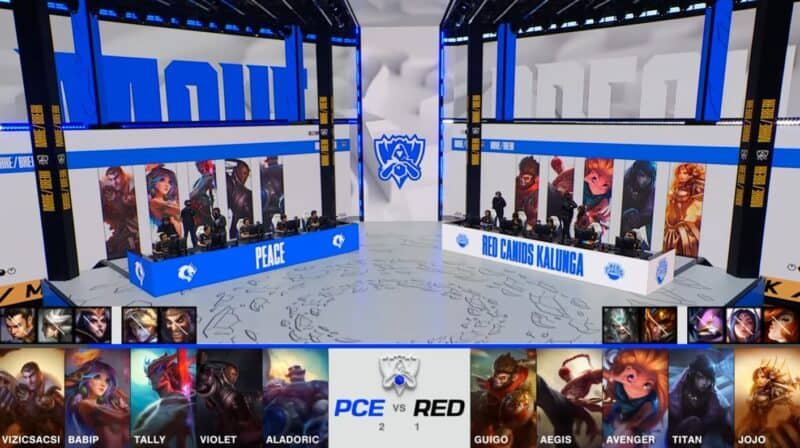 Now the pressure was truly on for RED, as PCE was one win away from eliminating them from Worlds 2021. Thankfully for them, they had a great start to the game. At three minutes, RED started a skirmish in the top lane, where they went up two-for-one in kills, one of which was First Blood.  PCE Babip hit back with a gank on the top lane to kill off Guigo a minute later. Then, the PCE jungler went bottom lane to kill RED's support Jojo. Soon after that, RED also won a skirmish in the mid lane to add another kill to the collection.

While PCE tried to regain footing with the Rift Herald, TitaN stayed in the bottom lane to pick up three tower plates. When PCE attempted to put some pressure bot, RED turned it right around to pick up three unanswered kills. To make things worse for PCE, when they dropped the Rift Herald top, it never even got a charge off and died instantly. RED was fully in control and tightened their grip on the game at 18 minutes. Here, they killed Babip and Vizicsacsi before taking three whole towers.

Honestly, at this point it was all but over. PCE seemed lost in this game, and it showed at 20 minutes, when RED invaded PCE's jungle and killed three PCE members there. Afterward, RED easily slew Baron Nashor too. While PCE tried to mount a defense, RED steamrolled over them, demolishing all three Inhibitors before charging forward, killing more PCE members and ending the game. This tied the series at 2-2, bringing the hopes of both of these teams, and regions, to lie on one final game. 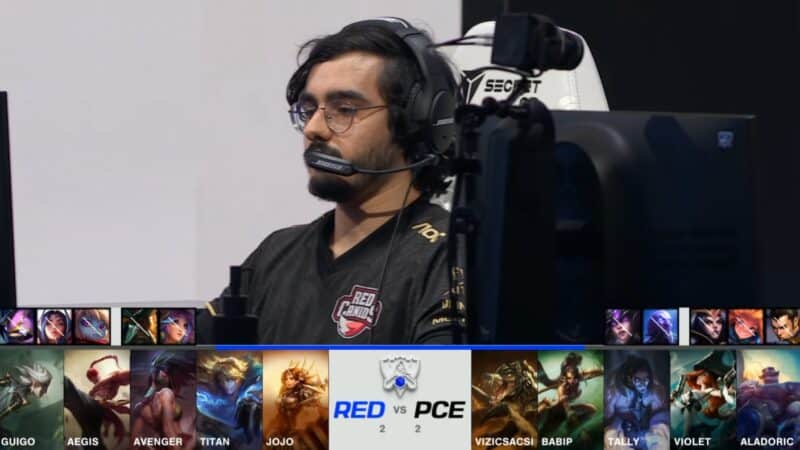 After a playthrough of Silver Scrapes, RED and PCE met on the Rift for the deciding game. It began on the right foot for PCE, who invaded at level one and scored First Blood onto Jojo. Things got even better two minutes later when Vizicsacsi's Renekton fought Guigo and Aegis 1v2 and killed one without dying. While that happened, Babip ganked the mid lane to cut down Avenger too. Then, at five minutes, a team fight in the bottom way resulted in PCE moving ahead with two more kills for only one loss of their own.

Even at just five minutes, PCE was out to a roaring start and had the match in the palms of their hands. This proved true at six minutes, when substitute top laner Vizicsacsi asserted dominance on Guigo with a solo kill. The following minutes were filled with PCE excellence. They took the First Tower bonus top, another tower bot and a dragon. But the game really exploded at 17 minutes. At this point, PCE forced a fight bot, and after getting one kill, chased the blood in the water to completely Ace RED and push through with a Herald to the Inhibitor.

In the midst of the Inhibitor take, Guigo donated over a kill to the already fed PCE, which allowed them to take their third dragon. The Baron spawned at 20 minutes, so with total map control, it was free for PCE's taking at 22 minutes. With a massive gold deficit, RED had no answer for PCE's onslaught. They tried to force a desperate team fight in the mid lane, but PCE was more than ready, and slaughtered four from RED near instantly. Chasing down the last kill, PCE put the nail in the coffin and finished RED's Nexus off afterward.

Tomorrow, PCE will face Cloud9 for a spot in the Main Stage, while RED will sadly go home.