As we approach the final days of the Play-Ins stage, it’s time for the first day of Bo5 competition.

First up for the day is Galatasaray (GS) vs Beyond Gaming (BYG) who’ll be looking to secure their spot in the final round of Play-ins. For the loser, it’s an early flight home and an end to Worlds 2021. With a chance to face off against Hanwha Life Esports for a spot in the Group Stage on the cards for the winner, it was all or nothing in this best-of-five decider. 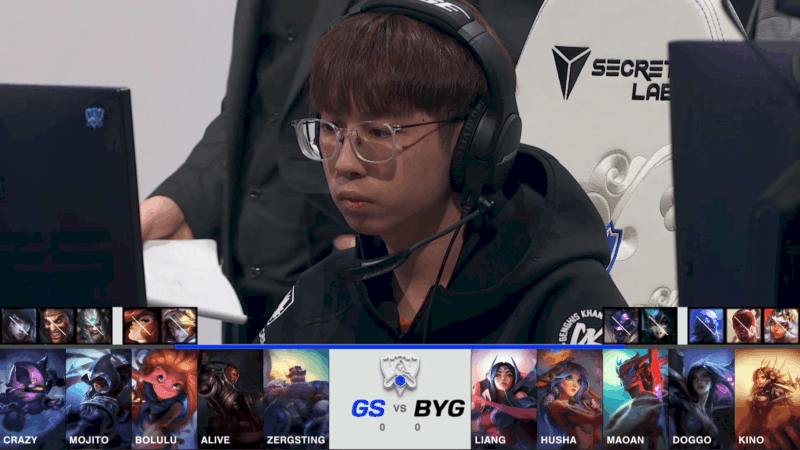 Even the first game of this series was a banger. GS picked up First Blood, though BYG was able to trade it right back. BYG did expend more resources, however, as GS held a small 1k lead. Then there was another series of back-and-forth plays, and while the kills trade one-for-one, BYG was able to steal away the Rift Herald from GS to get an early game win. It wasn't the usual Game One of a Bo5 series, with fights breaking out all over the map as both teams looked to gain an early foothold in the series. GS went from a kill in the bot and top lanes, to losing two in the mid/jungle as BYG moved into a gold lead.

The BYG snowball had begu. With mid and bot lane towers secured, BYG moved ahead on kills before claiming a Rift Herald. From a previous 1k deficit, BYG found themselves 3k ahead at the 16-minute mark. We finally got our first team fight around this time, though BYG was not prepared. GS showed up, and BYG faltered. They win the fight and pick up their third drake of the game. Shortly after it was GS's turn to make a mistake. After picking up the first tower on the top side, they committed for a second but over-extended and lost a fight. BYG maintained their 3k lead as both teams reset and took a breath.

GS secured a massive fourth drake but lost four members and a Baron in return. If the game extends they’ll have a win condition, however, BYG was in the commanding position. It’s the Elder Drake fight that’s started by BYG as they need to end the game. With the fight started, GS managed to steal it, and with Baron spawning, GS has a way to win a fight. With Mojito still dead, however, BYG forced a Baron fight and secured it. BYG picked up two kills, but GS found a pick and turned it all around. With the Elder Buff on their side, GS Ace'd BYG and the game was totally flipped on its head.

But no decisive moves were made with the buff, and as a result, the uber dragon buff spawned once more. With the next Elder Drake is on the map, the game hung in the balance. During the inevitable fight, GS secured it and BYG lost a member early, so they fled through their own jungle. GS picked up a second then stormed down the mid-lane, knocking down the Inhibitor with minions on their back. BYG defended valiantly, but with the Elder buff and the damage from Zoe, GS overturned a mid-game deficit to put an early mark on this series. 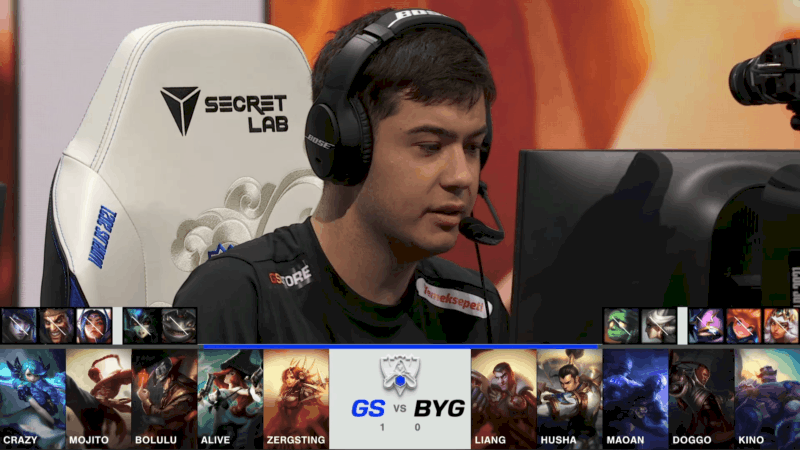 BYG started Game Two the right way, picking up the First Blood, and a second for good measure. GS did manage to get one for themselves, but BYG took the lead. GS just couldn’t get into their rythm in Game Two, and after starting off the drake, they lost two members and the drake to boot. With this, BYG moved to 2k ahead. Just like Game One, Game Two was full of back-and-forth fighting, and again, it was BYG coming out ahead in the early stages.

Moving forward, BYG continued to increase their lead. With the third drake on the map, they took down three members of GS while moving to Soul point. GS, however, did have a small comeback, pushing down the two outer mid-lane towers and securing two kills. They remained 5k behind but kept the game within their grasp. With the Soul Drake on the map, both teams postured for a fight. BYG started it, but it was GS that secured it. In the fight, both teams lost two members as GS delayed the Soul Drake for another five minutes.

On a knife's edge in the late game again

BYG managed to get a big early advantage in the next team fight, but it was GS that traded back with another fight going even on kills. With the next drake spawning, BYG did finally manage to secure it, securing the Ocean Soul before moving to pick up the Baron buff. With GS chasing, BYG fell back and left it while GS moved to try and secure it. GS did manage to secure it, and BYG retreated, licking their wounds as they failed yet another 50/50.

It’s another Elder Drake, and it’s another GS 50/50 steal. This time, however, BYG won the fight and finally looked to make something of their lead. They don’t look to end the game, instead opting to attempt a Baron. It was secured, but once again GS chased them into their own jungle and BYG lost yet another key fight. Seeing the opportunity, GS pushed through the top side of the map and secured a massive second win as they moved to match point. 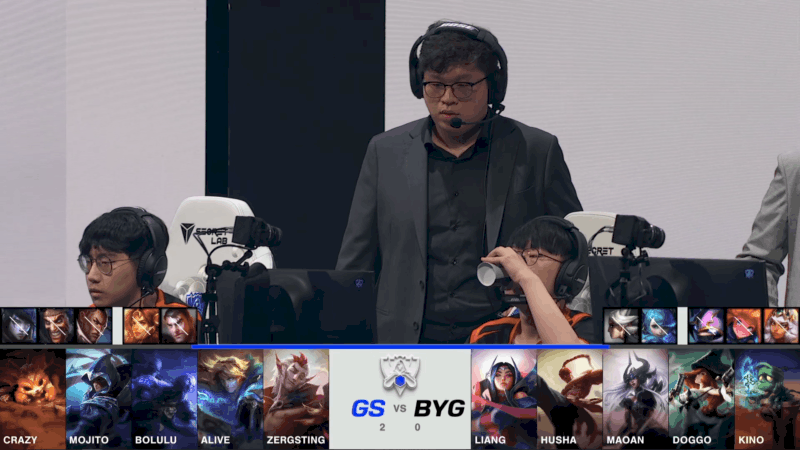 Game Three, and BYG was once again the First Blood kings. In a scrappy early game bot lane, BYG came away with two kills after a bot lane dive. GS got back onto the board, trading one-for-one as BYG maintained their 1k lead. Shortly after, GS once again fought back, and despite the 3k gold lead BYG overextended for a kill and ended up getting punished for it.

BYG finally looked like they learned from their mistakes as they dove the GS mid-lane tier one and two towers. For a moment, it looked like they’d once again bitten off more than they could chew, but they just about managed to walk away with a kill advantage. By the time Baron was in play, BYG had a 5k lead, just half the lead they threw away in Game Two, so the game’s still well and truly all to play for at this stage. Finally, GYB secured a 50/50 objective, and after a decisive fight, they Ace'd GS and claimed an Infernal Soul to boot.

With these two major buffs, GS simply couldn't stop BYG from rampaging through their champions and their base. BYG did turn that early game lead into a win, as with Baron and Infernal Soul behind BYG, even GS couldn’t overturn this massive deficit. This BYG victory brought the series back to 2-1, as BYG looked to reverse the tide of the series. 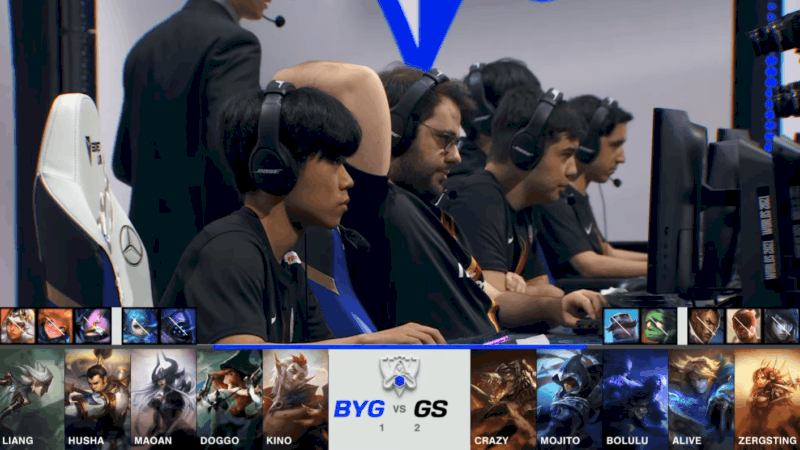 In the potential elimination game, it’s another BYG First Blood, though GS is once again able to pick up a kill in return. BYG followed that up with two more kills on the bot side, with just one in reply. Though GS quickly won a 2v1 in the mid lane as the gold lead remained even. Top side is where the next fight happened, and despite a good start from GS, BYG again came away with a two-for-one kill lead.

After all this action, both sides reverted back to lane control. At the 12-minute mark, the teams found the gold at an even 21k apiece. With a second Rift Herald and drake on the map shortly, the action would soon follow. Another fight, another trading of kills, however, this time GS took a lead in the fight, while BYG moved 500g ahead. More fighting, more kills, the same gold difference. Despite fights breaking out across the map, BYG maintained a slim 500g lead as the game approached the Baron spawn.  BYG continued their pressure, but in the post-20 minute team fight, secured an Ace and a drake, while losing just one member in return. GS respawning meant the Baron remained on the map.

With BYG investing heavily into the bottom side of the map to take out Crazy, GS took the Baron buff off the map with BYG once again misplaying around a major objective. While BYG picked up their third drake, GS continued to assert their Baron buff on the top side, claiming an inner tower for their efforts. When a fight broke out in the mid lane, BYG was able to come out on top as they Ace'd GS. BYG marched through the top lane and ran straight through to end the game. GS just couldn’t do enough in the game to stay in it, as the series goes to a fifth and final game. 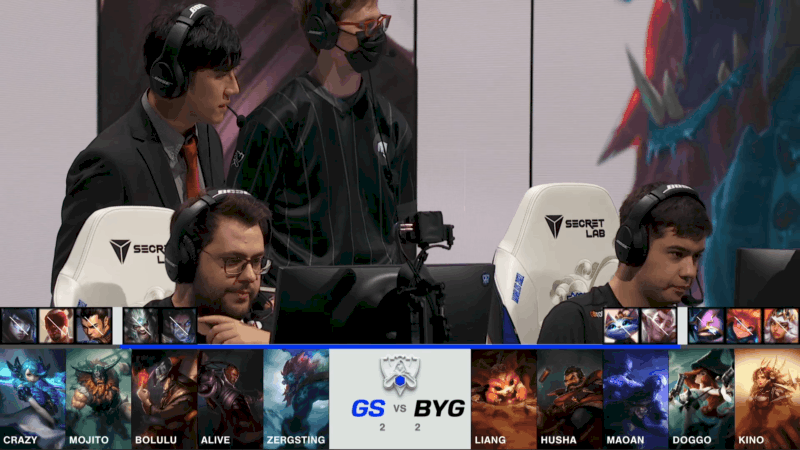 Silver Scrapes. The fateful Game Five. This time, it was GS who picked up First Blood. Though with TPs flying into the bottom lane, BYG managed to pick up two kills for themselves. As with most games in this series, GS found themselves behind early. It’s another play going the way of BYG in the early game as Zergsting is caught out, which moves to 1k gold ahead. The second drake spawned on the map, and this time it’s a GS play that seals it. Picking up a second drake, and two kills in the process, the gold lead is back into triple digits.

However, BYG continued to turn the screw, extending their gold lead to almost 5k by the 21-minute mark. GS did move to Soul point, giving them a win condition if they could secure it. But when it came time, BYG managed to stop the drake captur, as GS couldn’t make the play stick. In the ensuing fight, GS failed to take any advantage of the fleeing BYG, meaning the gold lead shrunk slightly to 4k. BYG seemed determined to throw yet again, as in the next fight, GS picked up three more kills on the map with just one lost in return. BYG claimed the next drake, but GS looked to use it as bait. They lost the drake but claimed two kills to even out the gold lead once again.

Baron was the next objective at play. Eventually, BYG started it but with both sides getting low, BYG pulled away and reset. With BYG Realm Warping away, GS pulled the trigger to start off the Baron. BYG finally won a 50/50 in this series and walked away without dropping a member. BYG used that momentum to push into the GS base with Baron and that’s all she wrote. GS tried to defend but just couldn’t do enough. BYG moves onto the next stage of Play-ins, while GS goes home.