Damwon sought revenge on G2 for last year in this year's Semifinal.

The LoL World Championship is in its final stages. Four teams remain standing with hopes of lifting the Summoner's Cup and prove themselves the best in the world. Today, G2 Esports ("G2") and Damwon Gaming ("DWG") faced off in the first series of the Semifinals in a highly anticipated matchup.

Last year, G2 knocked out DWG early on in the Knockout Stage and were named the Korean killers. Because of this, DWG was eager to take their opportunity to enact their revenge and make their way to the Finals this time. But looking towards the present, both teams are hot off dominant victories, with DWG taking down DRX and G2 defeating Gen.G in 3-0 fashion. Now, it was time to put it all on the line. So without further ado, here's everything that happened in this magnificent series! 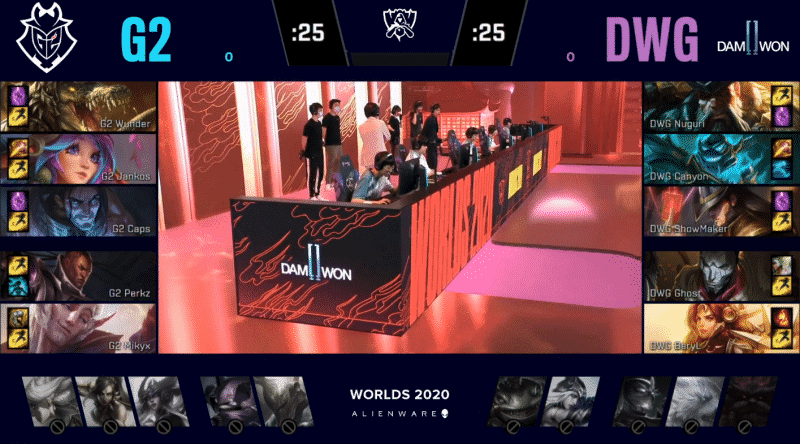 The first game of the series was a decisive win for DWG. Though Jankos ganked mid to kill Showmaker for First Blood, DWG always seemed to have G2's number. This was clear through the bot side plays, at the DWG duo lane killed Mikyx in the isolated 2v2. Then, they joined their team in a skirmish in the river to help DWG go up three-for-one in kills there. Things quickly got worse for G2 as Canyon ganked top to kill Wunder before taking the Rift Herald, which would eventually give them the First Tower bonus mid.

G2, as expected, didn't go down without making some crazy plays of their own. Caps tried to force a dive in the bot lane, but to his dismay, DWG turned the play around and killed him instead. From here, DWG ran a clinic, efficiently rotating around the map to find all sorts of objectives, including dragons, towers and another Herald. Knowing the game was quickly escaping them, G2 decided to throw it all on the table at the third dragon. Here, they tried to engage on DWG but couldn't do it before a DWG counterattack ripped them apart. The resulting fight was a devastating five-for-one in favor of DWG.

It looked rough for G2 after that, but they made it worse for themselves when they lost another team fight top side at 22 minutes, donating four kills over and a Baron. Soon after that, DWG also took the Infernal Soul and a pick onto Wunder, with Showmaker flashing an FPX emote the entire time. Finally, DWG set their eyes on the base, sieging two Inhibitors before engaging one last fight on G2 to Ace them and claim the first Nexus of the series. 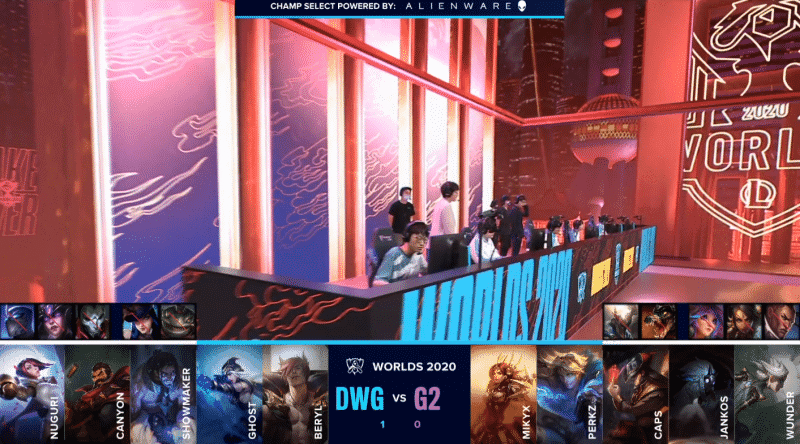 Game Two looked similar to Game One, except this time it was G2 dominating their opponent. The European side started it all off with their bottom lane going two-for-one in kills at four minutes. Next, G2 moved three members top to beat down Nuguri, who would then go on to have an uncharacteristically atrocious game on his Fiora counter pick. Shortly after G2 also slew a Mountain Dragon while DWG used a Herald to try and kill the bottom lane tower but couldn't do it and left it on very low HP.

Then all hell broke loose. At around 11 minutes, G2 forced skirmishes in multiple spots on the map, and it was hectic, but they pulled ahead in kills. DWG struck back by taking that low HP tower bot for the First Tower bonus and killing Wunder. But G2 kept up the pressure, forcing DWG into fight after fight and winning out every time. As G2 accumulated these kills, they went ahead in objectives too and put themselves on Soul point at 21 minutes.

At 25 minutes, G2 made a huge move. They outplayed DWG and won a huge team fight in the mid lane, killing three right off the bat. After that, they claimed Baron. Looking for more, they went towards the dragon pit and after a messy team fight, also grabbed the Infernal Soul. Unable to deal with the buffed-up G2, DWG forfeited two Inhibitors. From here, it was only a matter of time until G2 won one last fight to Ace DWG and blast their Nexus. 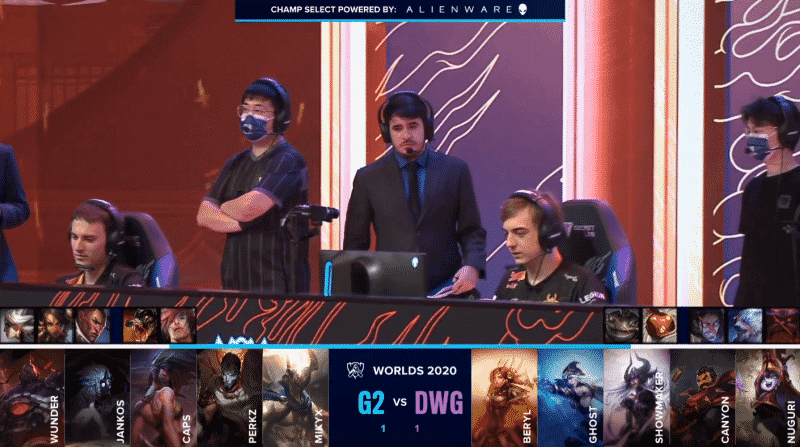 Game Three was definitely the closest so far in the early-mid game. This could be seen through the first play, where Jankos ganked bot to help Mikyx get First Blood. G2 also tried to dive the lone Ghost, but Ghost traded back two kills for one so it was a two-for-two overall. DWG soon started to pick up the pace though, picking up a bunch of kills in skirmishes across the map. In addition, they killed Mikyx multiple times as he found himself caught out.

Despite being behind, G2 was finding some kills of their own and managed to keep DWG's gold lead from getting too out of hand. It's important to note, however, DWG was able to stack dragons and was on Mountain Soul point at 18 minutes. This was incredibly important because the Soul would effectively negate Caps' impact on Akali. But before they got to that Soul fight, there was a bit of a swing. DWG picked off Caps then took two top towers afterward. Then they moved to Baron, but G2 contested it and ended up out team fighting them and killed multiple members.

Because of this, the game was quite tense and it looked like G2 might've found their footing. Finally, at 24 minutes, the fourth dragon spawned. Unfortunately for G2, they never got a good fight as Mikyx was caught out yet again, meaning DWG secured the Mountain Soul shield easily. A few minutes later, another team fight erupted in the mid lane, where DWG cut down tow from G2 and took the Baron. All DWG needed after this was one last team fight to kill three from G2, barrel through the bot lane and destroy G2's base. 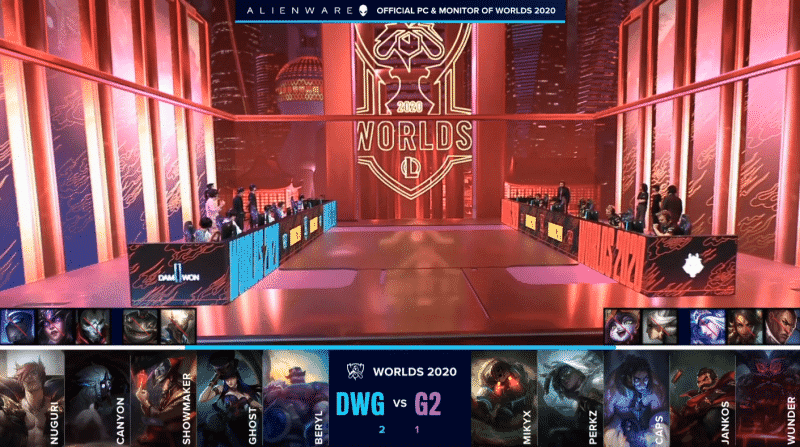 The fourth game of the series was perhaps one of the strangest ones we've seen in a while. It began with Showmaker putting on a show, solo killing Caps mid at only three minutes. A minute later, he made his way topside to dive Wunder with Nuguri and kill the G2 top laner. Next, the focus went bot lane, where DWG picked off Mikyx to put another kill on the board. The only thing G2 managed to do during this time was to take a Rift Herald. But even this wasn't great as they left Ghost's Caitlyn bot to free farm tower plates.

Another skirmish broke out at 10 minutes, where DWG picked up one more kill. After that, they finished off the already low bottom lane tower for the First Tower bonus. All G2 could do was use their consolation Herald for a measly top lane tower. In the next couple of minutes, more solo kills came out. Nuguri solo killed Jankos, and not wanting to be outdone, Canyon solo killed Wunder. Then, DWG demolished some towers and set their eyes on the third dragon.

When it did, the teams met for a team fight mid. The set up actually favored G2 this time. It went one-for-one though, with DWG claiming the dragon afterward. Then the craziness started. DWG used the Herald mid to take a tier two tower. That one went down, then Wunder followed it to the grave. So DWG got another charge off to take the Inhibitor tower. But they got another pick, so they went for the Inhibitor too.

But they didn't stop. DWG kept pushing forward, brawling with G2 even in their base. With only 18 minutes on the game clock, DWG destroyed both Nexus towers. There was more bloodshed but G2 couldn't even manage to put up a serious fight in these final moments. As a result, DWG pushed G2 away from their own Nexus, crushing it to finish off the game. With this, DWG enacted their revenge they waited a year for and secured their spot in the 2020 Worlds Finals.