Europe's and Korea's best teams will face off this Saturday.

After weeks of competition, the LoL World Championship is in its final phases. There are now only four teams left standing with the hope of proving themselves as the best in the world. Everything is on the line for these teams as only two series separate them from the Summoner's Cup.

The first Semifinal match will pit the LEC first seed G2 Esports against the LCK first seed Damwon Gaming. Both of these teams are excellent and wouldn't be surprising to see in the Finals. In fact, last year we saw G2 defeat Damwon in the Knockout Stage on their path to the 2019 World Finals. But the past is the past, and now the Korean slayers G2 must go up against perhaps the most formidable LCK team of the past couple of years. 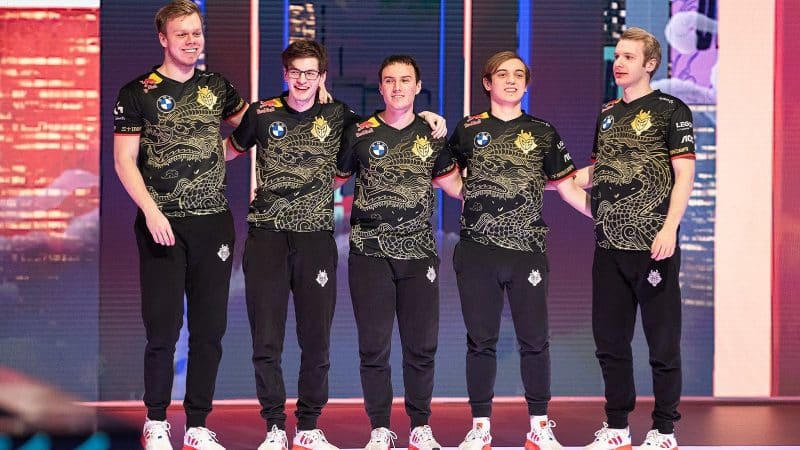 As many consider Damwon to be the favorites for this match, they have the clearest win conditions. G2, on the other hand, needs to show us the spark they had in 2019, with innovative picks and fast-paced gameplay. This has the potential to be a great series, but if it is to be, it relies heavily on G2 showing up in peak form, not the coin-flippy version of themselves.

The high variance gameplay that G2 shows is likely to be the deciding factor in either team's victory. Damwon is a clinical team, they pick apart their opponents individually and through smart macro. They have some of the most skilled players in each role too, meaning it's difficult to focus one weak link and exploit them, plus it's incredibly hard to exploit them in the early game. Because of this, perhaps the most important thing for Damwon is to play games slowly, like against DRX. If things get out of control in the early game, it's possible G2 accelerates their lead too quickly and they can't recover. If this happens, Damwon could find themselves in a sticky situation. But if they don't give up much or, better yet, get ahead, they'll easily convert their leads into wins.

On the other hand, G2 absolutely needs to play fast and bloody. Damwon is way too good in the late game with the team fighting capabilities of players like Jang "Nuguri" Ha-gwon and Jang "Ghost" Yong-jun. As such, G2 should find strong matchups mid for Rasmus "Caps" Borregaard Winther so they can get mid priority. From here, they can attack the top lane or bottom lane, either way, if Caps is ahead he's able to roam and expand G2's overall lead. If they can catch Damwon off guard like Fnatic did against Top Esports in their first two games of the series, they might have a chance. Regardless, it'll be an uphill battle for G2. Damwon, along with Top Esports, is a tournament favorite for a reason. They're simply a dominant team, no ifs ands or buts. It's almost impossible to find a chip in their armor, even for a team as good as G2.

However, if this was G2 last year, the story might be different. Unfortunately for them, it seems that the team has declined somewhat this year compared to their peak form last year. Some members just aren't performing as well as before, and more importantly, they don't have that same creativity in the draft that caught so many opponents off guard. They're very inconsistent, meaning it's difficult to really believe in them because they could just not show up.

Because of all of this, Damwon is favored in this series and it will probably be a 3-1. G2 won't go down without a fight, they never do, but Damwon is expected to have a strong showing here. Although, if any team is going to pull out a massive upset, its G2. So no matter what, this series is sure to be one of the most exciting ones in the tournament.