Damwon Gaming or Suning, who will be crowned the new World Champion?

The 2020 World Championship, after a month of incredible action, has come to an end. Today, the final two teams stood atop the mountain and fought with all they had in one last best of five. Suning ("SN"), the LPL's third seed, had the monumental task of taking on the LCK's first seed Damwon Gaming ("DWG").

Throughout the entire tournament, Damwon looked relatively unchallenged throughout this tournament. They ran a clinic on nearly every team, including previous World Finalists G2 Esports. But Suning made quite the run to get to the Finals too, rising past every trial that fate threw their way. During the process, they even brought down the best Chinese team and potential tournament favorites, Top Esports, in a convincing way.

But the past didn't matter here. All that mattered was how these two brilliant teams played on the biggest stage in the World. So, without further ado, here's how the 2020 Worlds Finals unfolded! Game One was very, very tense, with both teams looking pretty evenly matched. The early game wasn't explosive, but First Blood did come out at 10 minutes when SofM ganked top to kill Nuguri. Though they did get the kill, DWG was focused on objectives, taking two dragons in these first 10 minutes as well as a Rift Herald. Then the action started. First, a team fight with multiple TP's broke out bot, where DWG came ahead one-for-zero in kills. But at 16 minutes, SN struck back with a three-for-one team fight win of their own.

In between those engagements, DWG took a third dragon and set themselves up for a quick Infernal Soul. The team fight for this happened at 21 minutes, where SN botched their positioning and allowed a DWG engage. As a result, SN lost four and DWG claimed the powerful Soul. It looked bad, especially as DWG descended onto Bin to catch him out. But SN outplayed DWG to collapse on the play and win the ensuing team fight four-for-one. Afterward, they took Baron and was back in the game.

After this, the game was drawn out as both teams fought for major objectives. At the first Elder Dragon, SN managed to pick up the buff but lost it on all members soon after. At this point, DWG appeared to be in the driver's seat, as they had map control. SN somehow stalled out DWG, though they could only do it for so long. After DWG secured their second Baron, they took two kills too, meaning it was easy for them to push into the base and smash SN's Nexus. 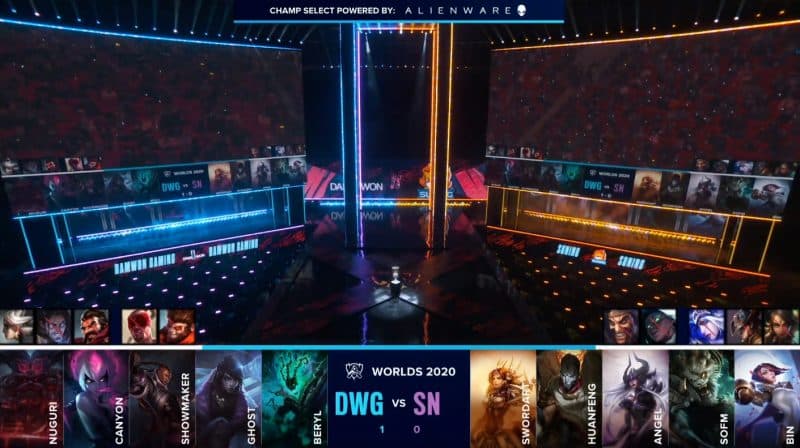 Not wanting to be outdone, SN hit back hard against DWG in Game Two. Oddly enough, the early game unfolded similarly to Game One, except with the sides flipped. DWG's Canyon solo killed Huanfeng for First Blood, which is an important start for the assassin, but SN accumulated multiple dragons. Although DWG did use their massive bot lane pressure to take the First Tower bonus there. Finally, SN furthered their objective lead with a Herald take, though it didn't amount to much.

Around the 20-minute mark is when the action really started. SN kicked it off with a pick onto Showmaker in the river, but they lost their ADC shortly after as DWG killed him mid. Then, at 23 minutes, the teams met at the fourth dragon, which would mean Cloud Soul for SN. Here, DWG pushed SN out of the river and got a kill. Seeing an opportunity, they slew the dragon to deny Soul then moved the Baron. SN managed to push them away though as two kills dropped for each side.

The next couple of fights were pretty close, with DWG actually slightly coming ahead in them. That was until 29 minutes, when after losing a fight three-for-two, SN rotated to dragon. Here, the SofM and Huanfeng claimed the Cloud Soul and brutally outplayed DWG to get three kills with their freshly respawned team's help. They kept up the pressure, as Bin dove and killed Showmaker under his mid tower and his team took Baron. Soon, they regrouped and pushed mid to take a mid Inhibitor. Then, finally, SN forced mid for one last 5v5. Bin piloted his Fiora to perfection, dashing around the fight killing DWG members left and right. When the smoke cleared, he stood tall with a Pentakill. With this, SN easily pushed into DWG's base and responded to their Game One victory with a Nexus kill of their own. 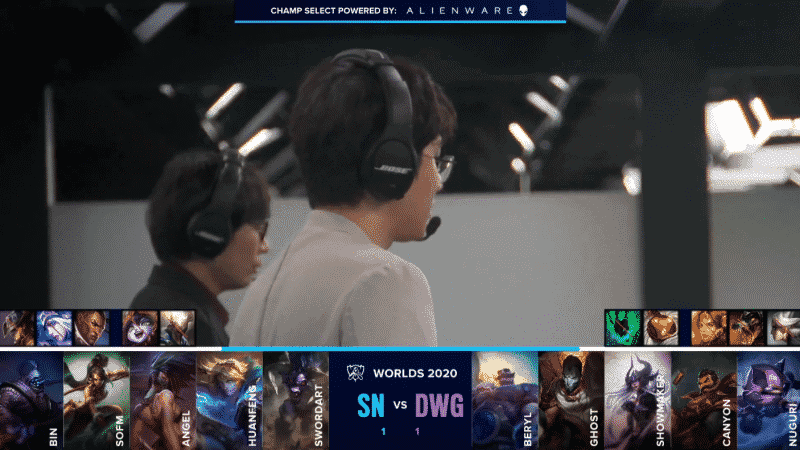 The third game of the 2020 Worlds Finals featured a showing many expected from DWG. Bin, high after his Pentakill last game, was knocked down a peg as Canyon ganked and killed him for First Blood. Not yet satisfied, a few minutes later Canyon returned and snagged another kill on him. Meanwhile, DWG furthered their lead by taking down an Infernal Dragon and a Rift Herald. SwordArt did gank top to try and get Bin back into the game but ended up taking the kill himself so it didn't really amount to much.

Then, at 14 minutes, disaster struck for SN. They moved three players top to dive Nuguri but Beryl roamed in time to help him. Because of this, Nuguri was the one who picked up the kill, while DWG took the First Tower bot, then a tower mid and eventually the first top tower too. This was a massive gold swing for DWG and it all came off the back of a SN play.

But, somehow, SN pulled it back temporarily. At 22 minutes, DWG picked SofM and went to Baron. SN contested the take and absolutely slaughtered DWG, killing all five DWG members and claiming the buff themselves. Though they didn't blow open the game, the next couple of fights indicated that SN was still in it. There were some objective attempts from the teams but the crucial one was at the Baron. At 33 minutes, DWG picked off SwordArt and immediately rushed to Baron. After securing the Baron buff, DWG turned for a fight and dropped three SN champions. Seeing their chance they rushed mid, taking an Inhibitor before pushing forward to grab two more kills and, ultimately, a second SN Nexus.

DWG, with this win, brought themselves to match point and one game away from the title of World Champions. 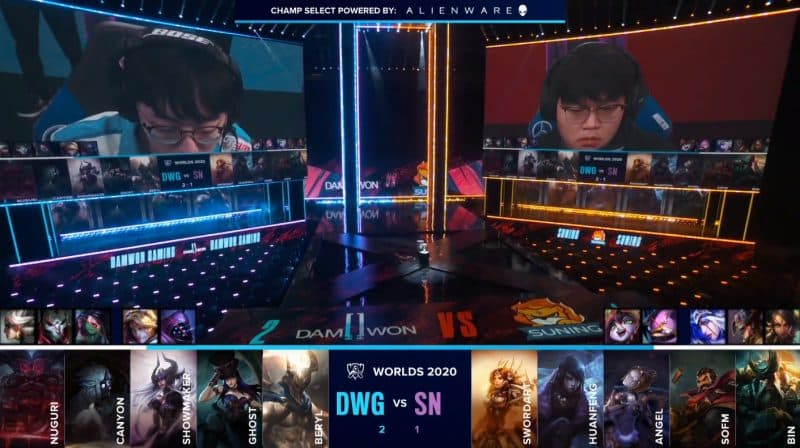 Game Four decided the fate of SN and DWG. And it was a clean one, for better or for worse depending on which team you rooted for. Beryl on Pantheon picked up First Blood onto Hunafeng in the isolated 2v2 bot. This pressure meant DWG easily slew the first dragon right after. DWG then shifted top to win a two-for-one fight and gain more gold. However, the SN bot lane did manage to kill Beryl in the 2v2, giving Chinese fans a ray of hope.

As Canyon and Nuguri dove to kill Bin, though, that quick soon faded. SN was simply unable to stop DWG from accelerating the pace of the game, and because of it, DWG kept forcing plays and gaining more objectives. Towers fell left and right, as DWG also moved to the Infernal Soul point. SN attempted to pull off one last, desperate play by diving the DWG bottom tower. Sadly for them, DWG collapsed on it and killed all five members while losing only two.

With such a massive lead, DWG played it smart, simply waiting for the fourth dragon to spawn. Once it spawned, DWG swiftly killed two from SN and claimed the Soul. SN seemed to collapse after this and was massacred whenever they left their base. First, DWG decided to go bot, where they took the Inhibitor after finding two kills. After that, DWG rotated mid to get three more kills. As three members were on death timer, SN could only watch on, defeated, as DWG rampaged through their base.

At 26 minutes, DWG crushed SN's final Nexus underfoot to finish the game and claim the title of 2020 League of Legends World Champions.