RNG or DWG KIA, who is the best team in the world?

After being cancelled last year, the Mid-Season Invitational finally returned for 2021. After over two weeks of intense competition, only two teams remain, China's Royal Never Give Up (“RNG”) and DAMWON KIA (“DK”). While DK is looking for another international title following their World Championship victory, RNG wants to bring down the World Champions and prove themselves as the best team in the world. All that was left was one, single best-of-five to decide it all! 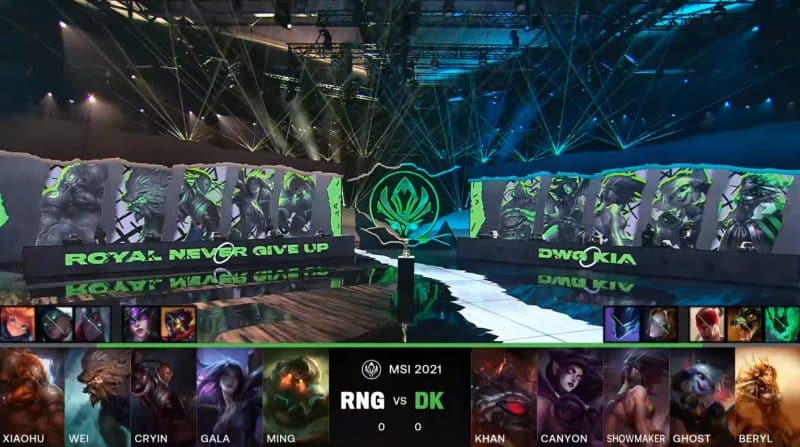 In the most anticipated match of the year thus far, RNG and DK delivered an incredible Game One. And it was RNG who struck First Blood when Wei ganked the bottom lane to get an important kill for Gala. In the early stages of the game, it was clear that both teams could feel the pressure, as one 5v5 broke out but no kills were had. A few minutes later, the teams met at Rift Herald, where the kills went two-for-two but RNG secured the objective. Throughout the first 20 minutes, Wei also claimed another Herald and three dragons to his team's name.

Things looked dire for DK. Even though Showmaker found a solo kill on Xiaohu, RNG was on Soul point and had firm control on the game. At 22 minutes, RNG did claim that Soul, and most probably thought DK was done for. However, the World Champions weren't going to go down quietly. First, they found a pick onto Ming, then fought RNG toe-to-toe in their jungle. The fight here was tense, but DK managed to claw ahead with a three-for-two kill trade.

Then came the first Elder fight. Again, it was close, and though Gala stole it, DK won the fight four-for-three, meaning only one Elder buff remained. But DK wasn't ready for RNG to force the Baron on respawn, meaning RNG snagged that, as well as four kills as DK was caught with their pants down. From here, DK really couldn't find their footing again. It took a few minutes, but after another Elder and Baron, RNG brought DK to their knees to win Game One. 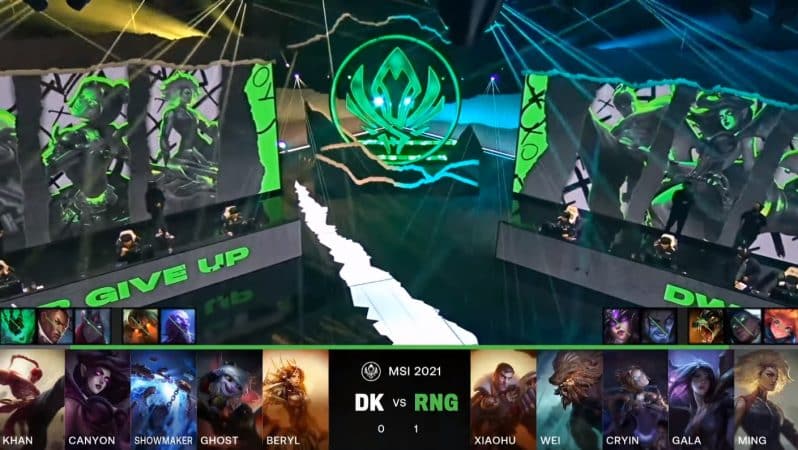 Game Two was just as explosive as Game One, more than delivering on the hype. Once again, it was Wei who found his way to the bottom lane to get First Blood plus one more for RNG. A few minutes later, DK got their own kill in the top side by sending three to kill Xiaohu. But the real defining early game moment came at eight minutes. Here, both teams met for the first Herald again. Like the first game, RNG routed DK at the objective, picking up four kills and the Herald. After this, RNG was in the driver's seat.

As such, RNG had the objective control and dragons, just like the first game. But as they went for the third dragon, DK showed up to contest. The teams skirted around each other until Khan on Lee Sin made a beautiful Flash-kick engage onto Cryin. Killing the RNG mid lane instantly, DK pushed forward to cut down one more RNG member before claiming the Infernal Dragon. Immediately afterward DK went to Baron, took that too, then five more kills as RNG crumbled.

Now that DK had swung the gold right back into their favor, they were unstoppable. Though they couldn't end with the Baron, they did enough damage to weaken RNG considerably. The game was on a knife's edge, then Khan once again showed up huge. RNG tried to catch him out in the top lane but couldn't manage to bring him down. He stalled long enough for his team to help him slay Cryin and make their way straight for the RNG base. After another fantastic engage from Khan, DK forced one last fight to slaughter the remaining RNG members and answer back a Nexus kill of their own. Strangely enough, Game Three was similar to Game Two, just with the roles flipped. This time, DK were the ones who picked up First Blood in the bot lane, with the gold going over to Ghost's Jinx. But RNG continued to have superior objective control, as even though the first dragons went over to DK, RNG secured the Rift Heralds and First Tower bonus. Aside DK catching out Xiaohu, there weren't many kills to be had.

That was, until the 17-minute mark. Here, as DK was trying to move to Soul point, RNG contested the World Champs at the dragon pit. Inevitably, a fight broke out, and though DK started it, RNG finished it in commanding fashion. They killed four from DK before slaying their first dragon of the game. However, DK didn't look completely out of it. Still feeling good, they managed to pick off Wei in a team fight and instantly turned to Baron.

Unfortunately, this is where it all unraveled for DK. Instead of taking the 5v4 fight, they huddled in the back of the Baron pit and were eviscerated by both Baron Nashor and RNG. After losing all five members, DK lost the Baron and control of the game. From here, DK did trade some blows with RNG but only stalled their opponents. Eventually, RNG claimed a second Baron and during the siege, Gala used his Kai'sa ultimate to dive into the DK squad and assassinate Ghost. With his Guardian Angel, he popped back up as his team backed their superstar ADC to obliterate all five DK members, smash a second Nexus and put the MSI 2021 Finals on match point. With their backs against the wall, DK pulled out all the stops and committed to early game dominance in the draft. They played to their win condition well too. At six minutes, the DK solo laners paired together to fight 2v3 in the RNG jungle, where they grabbed First Blood on Wei. Afterward, they stuck around a bit too long and were punished for their overaggression, leading to RNG going up two kills. This didn't stop DK though. They kept up the pressure and had strong dragon control. This, with two winning fights in the bottom lane, netted them a sizable advantage moving into the mid game.

Thanks to their composition, DK could continuously push the pace of the game and punish and mispositioning from RNG. Or turn fights around with ease, which showed when RNG tried to fight DK in the mid lane but was routed. Between 16 and 24 minutes, there were only a couple of kills, but at that 24-minute mark, the action kicked back off.

It all started with RNG finding and picking off Khan. Seeing an opportunity, RNG rushed towards Baron but DK was confident in the 4v5. In the next fight, RNG killed another DK member but DK wouldn't stop chasing them, now even in a 3v5. At this point, Khan respawned and Teleported top just as the fight resumed once more. Ghost's Tristana shone bright here, as he pumped out damage and cut down each RNG member, emerging from the smoke of the battle with a Pentakill.

This was the final nail in the coffin for RNG in Game Four. Taking the Baron right after, DK had no problem dissecting the RNG base, forcing one final fight and smashing the RNG Nexus. 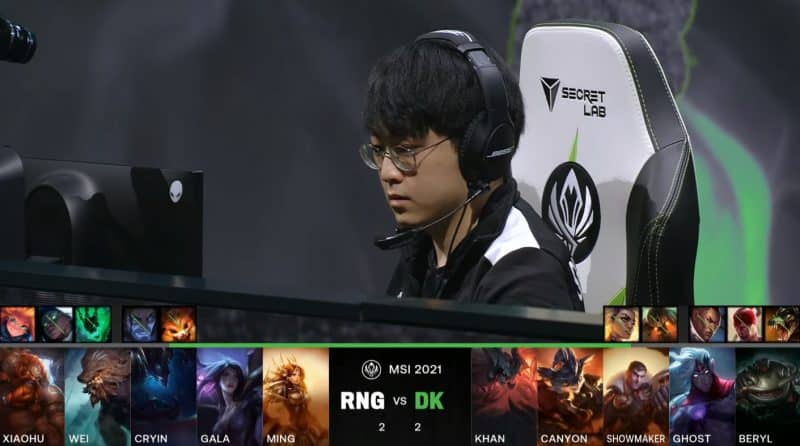 One game to decide it all. Each team has had its ups and downs throughout the series but it all came down to Game Five. Like he had so many times in this series, Wei asserted massive pressure from the jungle and showed Canyon what “jungle diff” is. He got First Blood in the bottom lane, then went mid with Ming to kill Showmaker there and even fought in a 3v3 top to claim yet another kill for his team. He never relented either. At nine minutes, he came back top to dive Khan and released the Rift Herald for First Tower.

Finding themselves in a seemingly insurmountable deficit, DK had no choice but to try and force plays over and over. Unfortunately for them, none of their plays ever stuck. Because of this, RNG soared far ahead in gold and continued to destroy towers around the map, take dragons and push DK further back towards their base.

At 20 minutes, Baron was on the cards and both teams were very aware. RNG wanted to finish things off quickly and engaged a team fight in the jungle, which spread to the mid lane. All five DK players fell in the blink of an eye and RNG smashed their middle Inhibitor. Following this, RNG went to set up Baron, and again a fight broke out in the jungle. Still finding nothing, DK dropped four more members while RNG secured Baron. Though they had to make a couple of pushes, RNG used this Baron to decimate the DK base and behead the reigning World Champions to win the 2021 Mid-Season Invitational and claim the crown of best team in the world.