It’s been an exciting few weeks of action, disappointment, and amazing plays. With just one more side to be decided for our Sunday Grand Final, DAMWON (“DK”) and MAD Lions (“MAD”) took to the Rift to decide who’ll face RNG in the Grand Final. 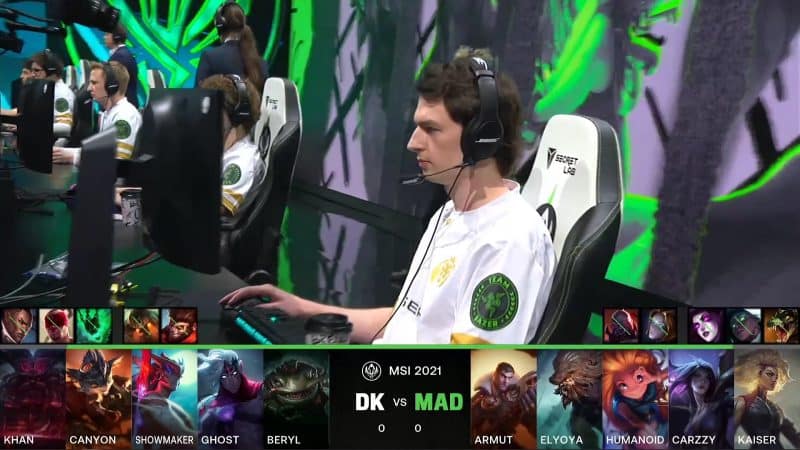 It was a huge start for MAD as they picked up First Blood in the bot lane 2v2, though they couldn’t quite get away with it for free, as DK pulled one back. Armut in the top lane follows up in the top lane with a solo kill under his own tower to give MAD some fantastic early momentum. In addition, MAD picked up the first drake before DK leveled up the kills. By 12-minutes, the game had settled down, with just a 200 gold difference between the two teams.

The back and forth continued as both sides picked up yet more kills. It was MAD that picked up the advantage in the mid lane 1v1, however, as they looked to forge an early lead. Sadly for MAD, it was DK that won the first major team fight, taking down two members of MAD without losing any in return. Shortly after, another 5v5. Despite a great start to the fight, MAD just wasn't able to make the damage stick. They tried to make the play but DK took down four members of MAD before moving to claim the Baron. With Baron, DK took down the MAD mid lane Inhibitor and it looked all over for MAD.

With Baron wearing out, DK hid in the MAD jungle and Aced them when they tried to venture out. DK pushed into the top side Inhibitor and swiftly destroyed the MAD base. DK showed exactly what they’re made of in a quick 25-minute game. 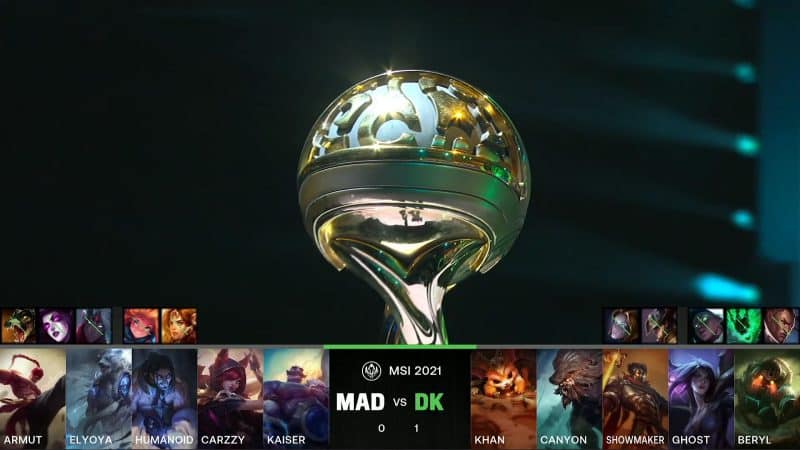 To kick off Game Two, DK was able to pick up First Blood after Elyoya came to the bot side to execute a 3v2 gank. Despite some slick footwork from Carzzy to land a Xayah feather stun, BeryL was able to counter as the sides went one-for-one. Right after that, it was DK again picking up kills, and this time, they came in the mid lane to move DK 1k gold ahead. The bot lane was DK’s next place to go for kills and the 3v2 gank in the bot side saw DK pick up another two kills. At this point, MAD looked lost. But finally MAD snagged a big pair of kills in the bot side as MAD won the bot lane 2v2, which resulted in a substantiall shutdown for Carzzy too.

Carzzy and Kaiser with the bot diff

From here, it just kept going MAD’s way on the bot side, as Carzzy and Kaiser continued to keep up the pressure on the DK bot lane duo. MAD fought for the mid lane tier one, and despite some crazy plays from both teams, MAD was able to come out on top The man of the hour Carzzy picked up three massive kills as MAD moved into a 3k gold lead. Next, a split 5v5 fight took place, where MAD lost the 3v3 while winning the 2v2. While MAD had a big lead, most of the gold was on Carzzy, who lost most of that in his shutdown. With Baron up, MAD postured towards it. When DK contested, they peeled for the fight and took down BeryL before both teams moved to the mid lane with drake spawning.

Not too much later, another fight broke out over Baron. Carzzy got an incredible steal but MAD couldn't win the fight, as three members were killed. Two members of MAD stayed alive and managed to keep their base alive. Once everyone respawned, MAD was able to pick up a free Soul Drake after BeryL practically gave away his life. Still with the numbers advantage, MAD threw themselves at the DK base and demolished the entire thing to come back to life in this series and put a real series on our hands. 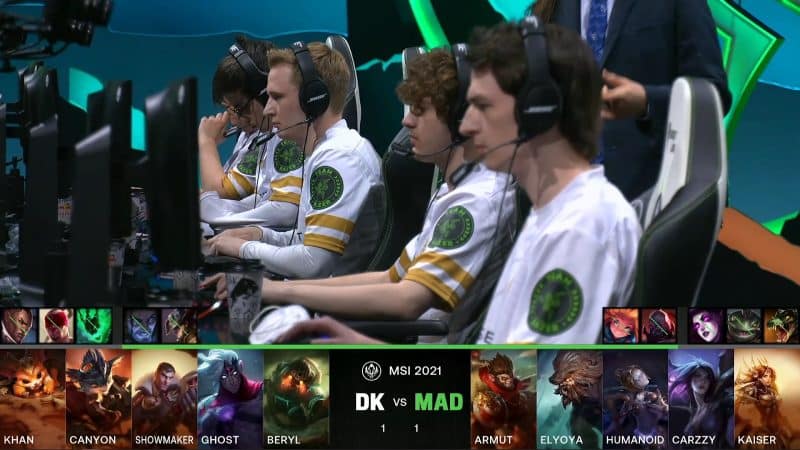 Moving into the third game of the series, it's again the MAD bot lane who came out swinging. After BeryL tried to catch out Carzzy, he was left exposed as MAD capitalized on the mistake to claim First Blood. Then, Humanoid was caught out in the mid lane, before MAD picked up another kill top side as both teams looked to get aggressive. The early game went the way of MAD, though DK picked up the first blood tower, making the gold lead around 500g in their favor. Just as things looked good for MAD on the bot side, they overextended in a fight and lost a member. With DK chasing, MAD sent two in behind DK and it was a massive three kills given over to MAD. They took a 1k gold lead and the game swung.

MAD started to look a little nervous with a few poor plays, though many were not punished. Despite being six kills ahead, DK had much better map control and moved to 300g ahead. At this point, the game became tense. Baron was up on the map and MAD was able to claim it. But the fight after the Baron dropped went the way of DK as MAD was Aced. Shortly afterward, MAD again picked up an important pair of kills when DK overextended. Plus, MAD was able to pick up their third drake as MAD started to make smart plays. DK looked lost, and MAD kept on punishing them.

MAD Lions go Carzzy to bounce back in Game Three

With Baron up and the Soul Drake available for MAD, the game was tense as we waited for the fight. The bottom river was where the next fight would be and it was MAD that came away with the four-to-three kill lead. While Khan did his best to stop MAD from getting the Soul, he simply wasn’t able to in the 1v2. He fell and MAD Aced DK to claim the Infernal Soul. The crazy fight was so back and forth but MAD came away ahead. Both teams respawned on the map but MAD again picked up a straggler of DK and easily converted that into a Baron.

Now empowered with Baron, MAD moved to the DK bot side. Fortunately for them, DK gifted them a free kill, blast coning their own support into the clutches of MAD. Seeing the opportunity, MAD took down the bot and mid lane Inhibitors while dealing with the huge poke from DK. DK’s base was completely open as MAD looked to force the issue. Finally, MAD forced the fight and it was exactly what they needed. While Armut delayed the members of DK, MAD focused on the Nexus, and it was actually the minions who won the game for MAD. With this stellar win, MAD moved on to match point. DK needed to find something big to come back. 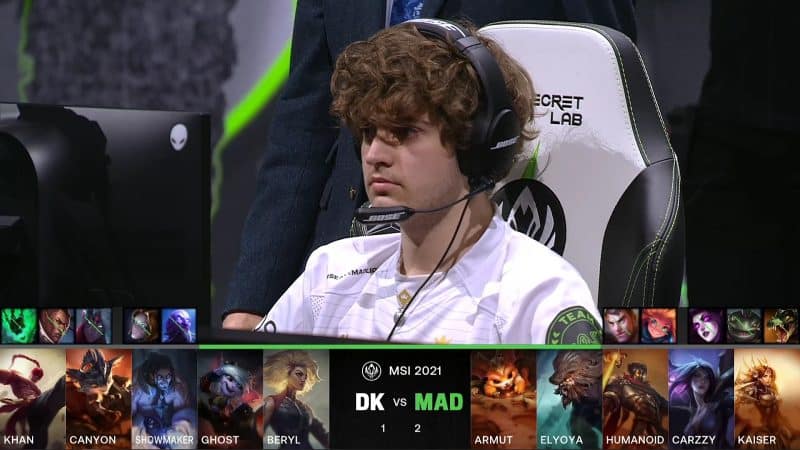 Another game, another MAD First Blood. ShowMaker went in on a 2v1 engagement but he went in early and lost his life for it. In the bot lane 2v2, it was MAD once again that came away with the kill when they went aggressive. Once more, bot lane is where the next play came out when Elyoya caught out Ghost. However, DK was able to get a kill top side after they committed three members to take down Armut. Afterward, there were more picks for MAD, in the mid lane, the jungle, and the bottom side of the map. Because of all of this, MAD moved into a slight lead.

Unfortunately for them, DK found their first majorly influential play. Here, MAD committed to a 3v2 in the bottom lane but BeryL soon got the help of ShowMaker, who Teleported to the lane to help DK pick up three kills. From a small 200 gold lead, DK moved to 3k ahead.

DK get it over with quickly

In a commanding position now, DK kept up the pressure, moving to 6k ahead as the number of plates they picked up fed the team. It was a Game Four to forget for MAD as they continued to get outplayed across the map with DK looking to take the series to Game Five. In a play of desperation, MAD over-committed again for one kill but DK countered it, taking down two members. As DK pushed into the bottom side of the MAD base, they took down another three members but stopped short of taking down the Inhibitor. At 19-minutes, DK was 10k gold ahead.

DK picked up the Baron and committed to bursting down the MAD base and did so with ease. MAD cannot do anything to stop them as DK claimed a much easier game four victory as we head to a fifth and final game. 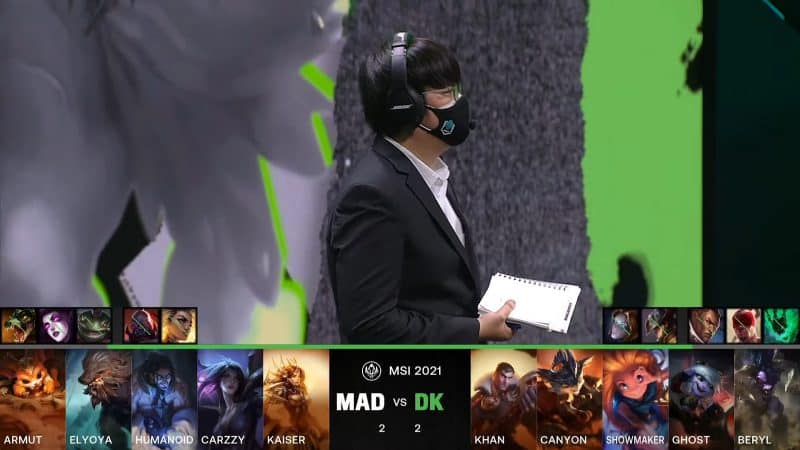 This time, First Blood went the way of DK, as they pulled off a 3v2 dive in the bottom lane. Elyoya quickly replied on the top side, helping out his top laner who was starting to get bullied. Shortly after, a 3v3 started on the bot side, but just the one kill ended up coming out, and it was on the side of DK. Things went from bad to worse for MAD. After they picked up the Rift Herald, DK managed to take down two members of MAD and continued to control the early gold lead.

An extended 4v4 in the bot side saw MAD lose out yet again as DK just always looked in control in the fights. Afterward, DK picked up more and more kills on the top side, and while Humanoid tried to save his side, DK pulled to 3k gold ahead. MAD finally got a fight in their favor around the Rift Herald, but despite MAD taking down two members of DK, MAD couldn’t secure the Rift Herald. So, DK threw the Rift at the MAD mid lane and managed to open up the Inhibitor at the 20-minute mark. With this, it was clear DK wanted to end the game early. While MAD survived, they looked defeated as they faced a monumental battle to get back into the game.

One last nail in the coffin

With the Inhibitor cracked, DK fought MAD at the doors of their base. They lost their support but took down four members of MAD in the process. DK moved to take down the Nexus towers but with respawns, MAD was able to hold out. MAD took down one in the defense, but DK was far too ahead in the game. Eventually, DK took the victory and sent MAD home. As most had predicted, DK will move forward to face RNG in the Finals. 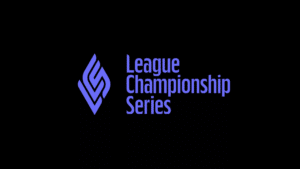 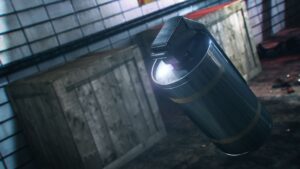