Who is the first team to advance to the MSI 2021 Finals?

After two weeks of competition at MSI 2021, only four teams remained as contenders for the trophy. The LPL's Royal Never Give Up (“RNG”) and The PCS's PSG.Talon (“PSG”) faced off on Summoner's Rift today to battle for the first spot in the Grand Finals, while DAMWON KIA and MAD Lions go head-to-head tomorrow.

RNG has looked like a strong tournament favorite throughout the Group and Rumble Stages, but PSG is a rising underdog with a lot to prove. Could the PCS reps bring down the LPL titans? Or was this another showing of dominance from RNG? It all came down to this! The series didn't get off to an explosive start, as Game One was a bit of a slow one. But it was PSG who struck in the early game. River started it off by ganking and killing Cryin mid for First Blood and took two dragons too. RNG tried to punish Doggo, who was left to his own devices bot, and though they killed him, he traded one in return. To keep the objective game close, RNG decided to dive and kill Hanabi top to secure the First Tower bonus for themselves too.

Moving into the mid game, the action fell off. Both teams were relatively even in gold and neither wanted to take a bad fight. There were a couple of picks and two-for-one kill trades but nothing that blew the match wide open. However, at 29 minutes, PSG did capitalize on RNG taking a dragon to snag themselves a nice Baron buff, though did lose two members for it. This should've given them a decent advantage but PSG failed to do anything with it.

After that point, PSG failed to do anything at all, really. They began to forfeit all of their vision and objectives to RNG, meaning RNG was able to secure a Baron and a Cloud Soul very easily. The first Baron for RNG didn't do much damage, but fortunately, PSG let them take another. This one was much more potent and allowed them to blast two Inhibitors, still with no contest from PSG. Eventually, Elder Dragon spawned, and RNG once again claimed it, no sweat. Afterward, PSG found themselves caught out in the jungle and were slaughtered by RNG. With one quick Ace, PSG fell and RNG smashed the first Nexus of the series. 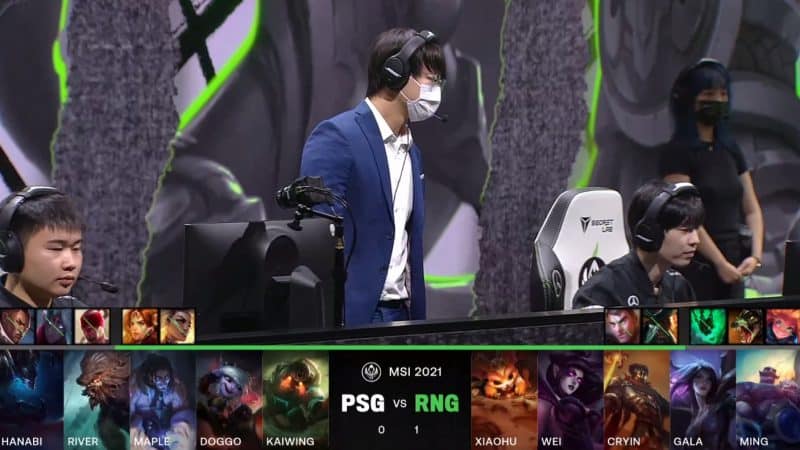 After losing a disappointing Game One, PSG came back swinging in Game Two. Similar to the previous game, PSG had full control over the dragon pit early, securing the first two dragons by 12 minutes. In addition to that, they had the kills, as they dove RNG's bottom lane at seven minutes to kill both of them. The gold lead grew even larger with PSG claiming First Tower bonus with the help of the previously taken Rift Herald.

At 14 minutes, a crucial team fight erupted in the top lane. It was well fought but PSG ended up coming away ahead three-to-one in kills. Then, true disaster struck for RNG. First, Xiaohu was solo killed by Maple in the side lane, while PSG collapsed on mid. Diving the first tower there, PSG picked up two more kills, which led to two towers and another dragon, setting themselves up on Soul point.

However, there were a couple of blunders from PSG that gave RNG some breathing room, and more importantly, gold. PSG quickly recovered though as the PCS squad dominated a team fight near the Baron to claim five kills and the uber buff. From there, PSG moved towards the Mountain Dragon, which they slew to get Mountain Soul too. Immediately afterward, a team fight happened an RNG was routed. PSG cut down four from RNG before sprinting for the base and destroying RNG's Nexus. 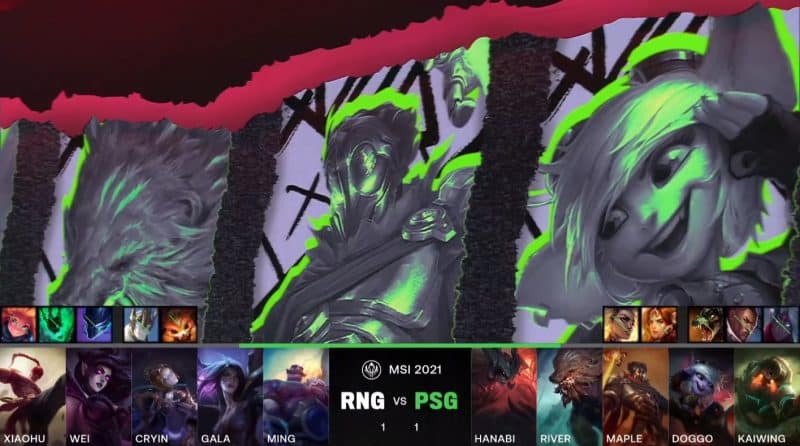 Angered from the last game, it was RNG's turn to show up. And they did so even in a clown fiesta opening few minutes. At level one, the PSG squad tried to late invade RNG at their red buff, but RNG was strong enough to flip the play around and get First Blood for themselves. Then, when PSG tried to gank the bot lane, RNG collapsed for two kills. It looked great for RNG with a 3-0 start but they stayed in the bottom lane for way too long, which meant PSG could collapse, get three kills and equalize the score.

Seeing this mistake, RNG shored up their play instantly. They asserted control over objectives and played the map well. Plus, the Chinese squad won a skirmish at 11 minutes two-for-one in kills, propelling them further ahead. At the 15-minute mark, RNG blew the game wide open. Here, RNG engaged on PSG in the mid lane, where they instantly blew up four PSG champions. Afterward, RNG pushed down two towers as well.

With full map control, RNG was unstoppable. PSG couldn't even stop them from using Rift Herald top to take two towers as well as the Inhibitor. From here, RNG snagged a relatively easy Baron and caught out two PSG members. Down two champions, PSG had no hope to stop RNG when they pushed straight into the base and demolished their Nexus. 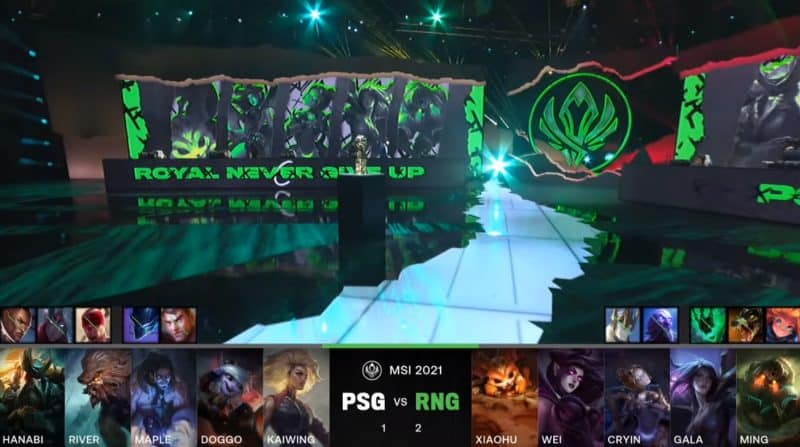 Now at match point, RNG was eager to finish off PSG, while PSG wanted to bite back. Things started off well for PSG, as they three-man gank Xiaohu to pick up First Blood. But RNG responds with an immediate Cloud Dragon kill, then a minute later, found kills in both the top and bot lane simultaneously. With this momentum, the game slipped away from PSG. RNG traded up in kills every fight, had better objective control and an ever-growing gold lead.

Just as RNG was about to seal the deal with an Infernal Soul capture, PSG showed up. River stole the dragon away and led his team to a two-for-one team fight victory. A few minutes later, RNG picked off Kaiwing and went to Baron, but PSG contested. This time it was Doggo who played to perfection. He killed Gala, then two more, and almost found a Penta in a 1v3 to stop RNG's Baron.

Down to the wire

Unfortunately, PSG couldn't stop RNG from claiming the Infernal Soul forever. Though when they did, PSG grabbed a kill in return. This kill gave PSG the opportunity to run to Baron and secure it, even going four-for-two in the team fight. It appeared that PSG would be taking RNG to Game Five after this. But it wasn't meant to be. RNG mounted a defense until Elder Dragon spawned, which was the decider yet again. Here, RNG had prior setup to the pit and was ready for PSG to contest. RNG obliterated River to eliminate the chance of a Smite steal, then managed to get the devastating buff for themselves. With PSG too close to run away, RNG ran them down and eliminated one after the other. Every PSG champion lie dead as RNG ran mid to slam one last Nexus and claim their spot in the MSI 2021 Finals.