The first Final of the weekend saw Fnatic face off against Rogue for a spot in the Grand Final against MAD Lions.

After their upset victory against G2 Esports, Fnatic found themselves just two victories away from reclaiming their LEC title. As for Rogue, they had a score to settle with MAD Lions after their Spring Split Grand Final loss. But first, the pair had to face off against each other to have a chance at the LEC title. 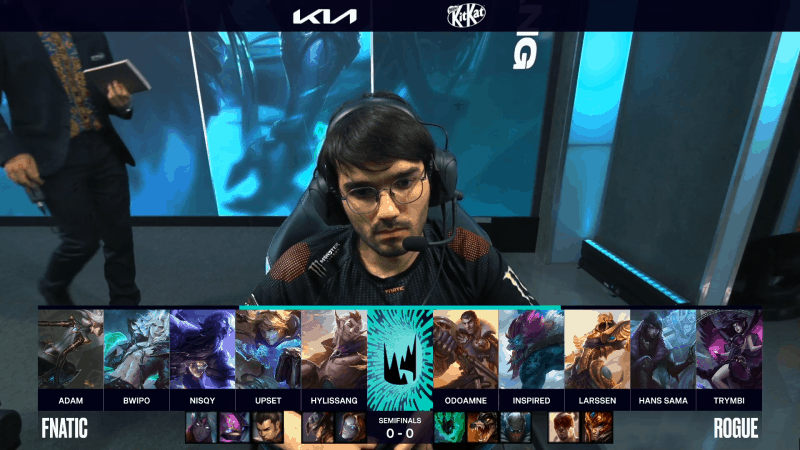 To kick off this all-important series, First Blood went the way of RGE, as they got exactly the start they needed. It’s a 2v2 in the bot-lane, and Hans Sama was able to pick it up. However, with bodies back in the lane, FNC forced a 4v2 against the RGE bot-side when they were way too far forward. Afterward, FNC again were the ones to make the proactive plays, exposing the RGE bot-lane for a second time. Picking up a double-kill in the process, FNC was able to turn that into a first Drake.

With a lead, FNC was relentless. After picking up the Rift Herald, they were able to move top side, take down Odoamne and get full benefit from the Herald. RGE did manage to pick up a Drake and a kill onto Hylissang for good measure but lost out of First Turret bonus, which went to FNC. Shortly after, FNC moved back to the top side of the map for their next play, picking up two kills for only one given away in return. At the 15-minute mark, FNC found themselves 2.5k ahead. Five more minutes passed, then with the Baron up on the map, FNC was able to take down Larssen before a fight broke out around the pit. Inspired tried to steal the Baron, but he appeared too late as RGE were routed.

A quiet Baron Buff for FNC, as they consolidate their lead to 9k and penned RGE into their base. With the second Baron spawning, the game would likely come down to execution around the objective. But it was a clean Baron taken from FNC, with RGE caught sleeping in their jungle. Equipped with Baron, FNC was able to steam through the RGE base uncontested and secure a massive first win of the series. 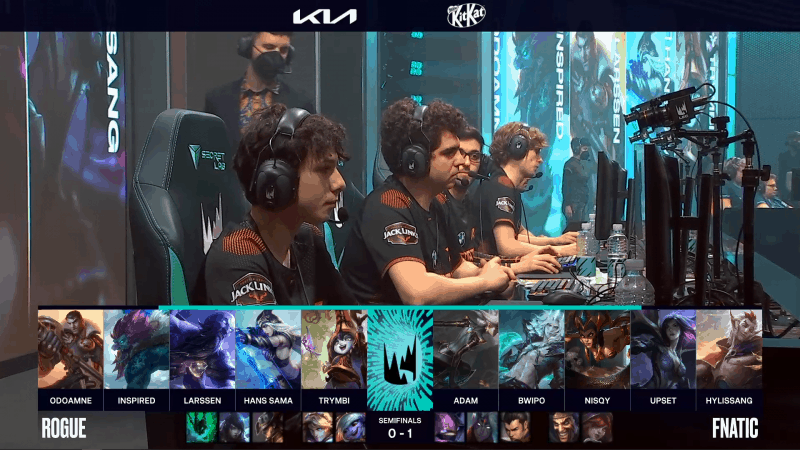 It was the perfect start yet again for RGE, as they picked up First Blood off Hylissang. Like with Game One, however, FNC was able to take down two members of RGE to gain an early lead. But it was a much scrappier second game, with trade kills happening all over the Rift. With just shy of a kill a minute by the 11-minute mark, FNC found themselves tied on gold with RGE, having picked up the First Turret bonus and a drake. As quickly as they secured those pick objectives, RGE turned their advantage into two kills on the top side, and another turret. With this, they moved solidly into the lead.

A brief bit later, RGE baited FNC into a misplay, with Trymbi retreating into the Baron pit, FNC was picked off as RGE took down four members. As a result, RGE moved to 3k ahead in the process and took control of the game. With FNC making a play onto the drake, RGE set up an effective trap in the Baron side river. Adam fell for the trap as he was swiftly taken down before RGE moved to secure the Baron. Despite the one-man advantage, it was FNC who won the Baron team fight, taking down four members of RGE and securing the buff. RGE went into the fight massively ahead, but FNC was able to close down the gap to just 500g post-Baron secure.

Like in Game One, with Baron down, it was FNC winning the fights. In the next 5v5, FNC dropped four members yet again and lost just one of their own. While Odoamne was able to secure a mid lane tower, RGE’s top lane Inhibitor fell in return. Then, FNC went for the game-winning plays. They again, easily won a fight against RGE to claim more kills as the game flipped on its head. They went from 4k behind to 5k ahead in a matter of five minutes. It was deja vu for RGE, another 5v5 fight, but this time it’s an Ace by FNC, and because death timers were too long for Rogue to defend their base, another game secured for NFC. RGE looked fully in control prior to the Baron, but it was FNC that moved onto an early match-point. 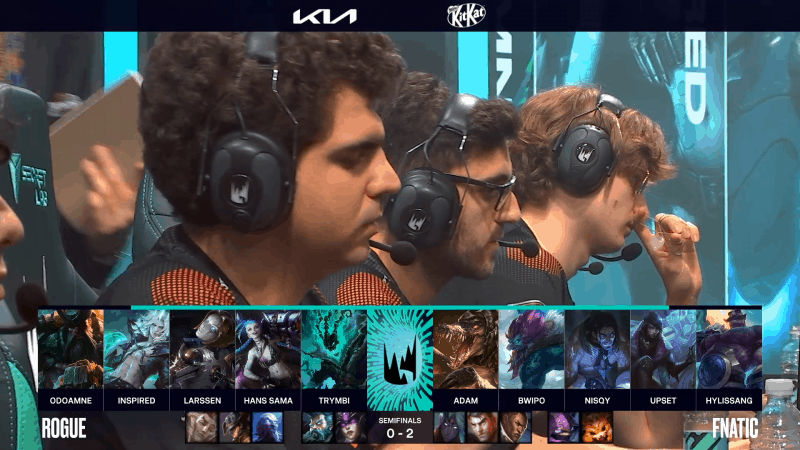 Breaking the mold, it was FNC this time that took the First Blood, this time in the bot lane 2v2. With yet more aggression on the top side, a 2v1 dive from FNC saw them pick up yet another kill as Bwipo ran rampant. Next up is another FNC play, this time back to the bot side, as FNC picked up two more kills. At 2k ahead by the five-minute mark, the decisive game was already not going RGE’s way. Nisqy was next to get himself on the scoreboard, winning out against Inspired in what became a 2v1. As soon as that was over, FNC went back to the bot side, grabbing another two kills. This time, however, FNC got greedy and RGE was able to secure two for themselves.

RGE finally started to get into the game by the 10-minute mark. Despite FNC being just shy of 2k ahead, RGE was starting to trade one-for-one in kills during fights, though ultimately, remained behind. While RGE was indeed looking like they’d found a way back, FNC again was more than equal to the pressure, coming out on top once more after a scrap. With Baron just three minutes away and a third Drake spawning, FNC moved to 3k ahead with the Drake secured.

In what could have been the game-ending play, FNC was quick to engage onto RGE when they moved into the bot side river. Here, Upset blasted three members of RGE back to their fountain with a massive Aphelios ultimate. Afterward, FNC was able to secure the Baron and the Soul point drake. RGE did their best to hold onto their base, but FNC played patiently and collapsed onto the four members of RGE holding onto the tower. FNC brushed them aside and moved onto the RGE Nexus. With that, FNC secured their Grand Final place as they looked to claim the LEC title.