Recapping the Spring Finals Rematch between Rogue and MAD Lions.

It’s happening, Rogue and MAD Lions, the newest rivals on the Rift are back at it again! After Rogue lost the chance to play at MSI in Spring, they are back to take on the Spring Champions once more. Rogue beat Misfits Gaming 3-2 to get to the Upper Bracket Finals, while MAD Lions knocked G2 Esports down to the Lower Bracket. The winner of the series will qualify for the LEC Summer Finals, while the loser will have to continue the fight on in the Lower Bracket. 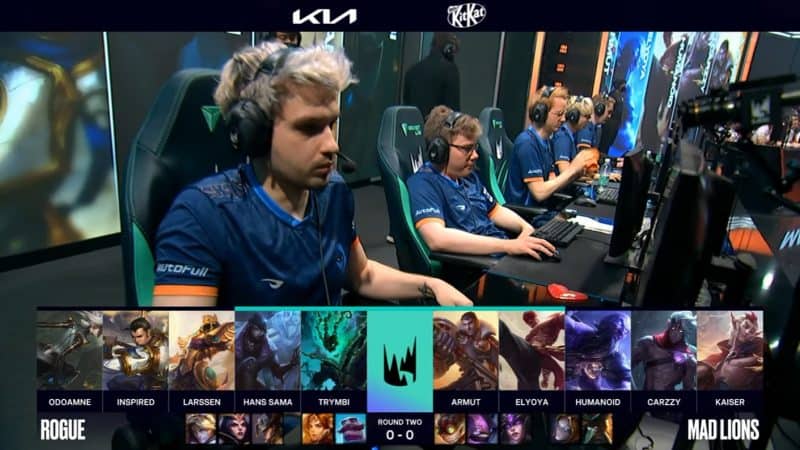 The first match’s draft laid out a clear game plan for both teams: Rogue wanted to play for the later stages of the game and scale with Camille, Aphelios and Azir, while having an all-around threat in the form of Xin Zhao. MAD Lions wanted to focus on the early skirmishes with Lee Sin and Ryze’s Realm Warp, while also having a failsafe in the Ryze and Jayce split push if needed.

As expected from these teams, the fighting started soon after the match began. MAD Lions chunked out Trymbi, who was forced to retreat before the minions spawned, and when the first wave crashed, the duos of the teams duked it out again. MAD then pulled off a flawless dive on the top lane, taking down Odoamne and getting First Blood. Rogue answered a few minutes later, as Hans Sama and Trymbi killed Carzzy 2v1, while Inspired soloed the first Dragon of the match. But MAD was quick to react after the Dragon, catching Trymbi and Inspired with a great Teleport play.

MAD didn’t let up after the aggressive early game, after continuously skirmishing they were up five kills. Mid game rolled around and a team fight broke out in which the Lions almost Aced their rivals, being up nine kills after the first 15 minutes. At the 20-minute mark, MAD Lions had two Drakes and a 5k gold lead.

Their lead really solidified after taking the first Baron of the match at 22:30 while winning a team fight breaking out at the pit. Rogue tried to find something around the map, initiating a skirmish on bot lane, but the Lions came to the rescue and turned the fight around. At the 29-minute mark, MAD Lions took their second Baron, and with a spectacular flank from Kaiser, managed to pincer Rogue at the Dragon pit half a minute later. They took down four members of Rogue then went for the Nexus which was only defended by Trymbi against five Hand of Baron Lions.

MAD Lions had an explosive first game while Rogue failed to go through with their game plan. However, the series still had some matches in it, and Rogue surely planned their bounceback. 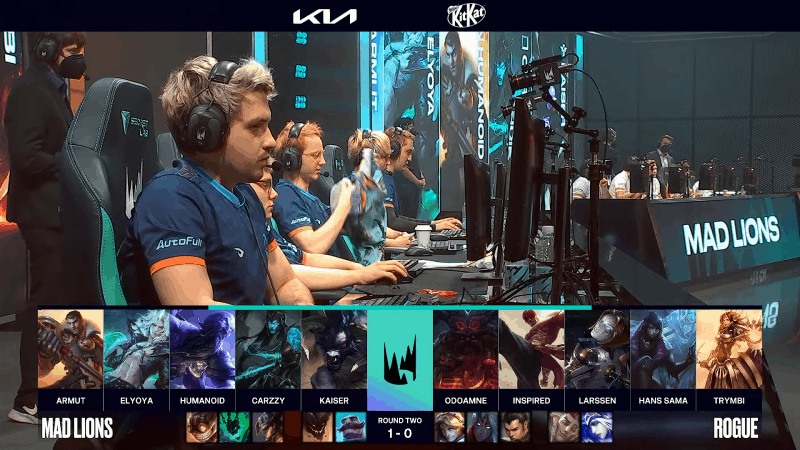 Game Two of the series was one of the most exctiging matches of the Summer Split, maybe even the whole LEC season. The team comps had some returning faces in Jayce, Ryze and Aphelios and the teams mainly had the same game plans as in Game One.

However, the match started out slower than the first. MAD Lions tried to find early leads, but Rogue countered them beautifully for the first few minutes. Nevertheless, Larssen fell after the five-minute mark getting ganked by Elyoya and Kaiser, giving away First Blood to the Lions. Rogue tried to have a proactive early game by having Inspired invade MAD’s Blue, but the Lions turned it around thanks to Kaiser roaming around top side.

The mid game heats up

MAD controlled the first 15 minutes of the match, taking the first Herald and the first two Elemental Drakes. There were some blunders though, like Armut dying 1v1 against Odoamne’s surprise Ornn pick. MAD Lions had great cross-map plays, diving on bot lane in synch with Rogue taking the first turret in mid lane.

The Lions continued to build their lead up until the 20-minute mark, where Rogue’s team comp started to get momentum. A great Command: Shockwave at the Drake pit from Larssen sealed the fate of the mid game, reducing the MAD Lions gold lead from around 5k to almost even. For a few minutes, Rogue took control while MAD Lions tried to look for mistakes and push in the side lanes to halt Rogue’s advancements.

Inspired and co. took the second Baron of the match at 30 minutes, but MAD Lions took down Trymbi then pushed forward with a great Realm Warp and two godlike engages from Kaiser’s Alistar to win their first fight since almost 10 minutes. MAD Lions then managed to get the Ocean Soul at the 32-minute mark, then get a Baron a few minutes later. With the Baron, they also killed three members of Rogue but lost two.

After the third Baron, the chaos began. Both teams almost ended the game, but Elyoya and his teammates weren’t fast enough with three members, and Rogue couldn’t take turrets fast enough without the Hand of Baron. The first Elder Drake fell into the hands of Rogue at almost 40 minutes, but MAD Lions made the smart decision and avoided fighting until the buff ran out. Multiple fights happened in a few minutes but no team could achieve a decisive victory, and the game came to a stalemate.

Rogue and MAD Lions also tried to base race each other but managed to stop each other by burning some Summoner Teleports. Rogue then won a team fight thanks to Hans Sama, who dealt more than 13k damage in a single engagement. After the fight, MAD Lions gathered themselves and took down Hans Sama in a team fight breaking out just moments after the previous one, then took down the second Elder Drake and went for the Red Nexus. Rogue tried to defend their base, but with only 10 seconds on the Elder Buff, the Pride managed to find a favorable team fight, take down four members of Rogue and win the game. With a 2-0 lead, MAD Lions need only one more game to end the series and make it to the Summer Finals. 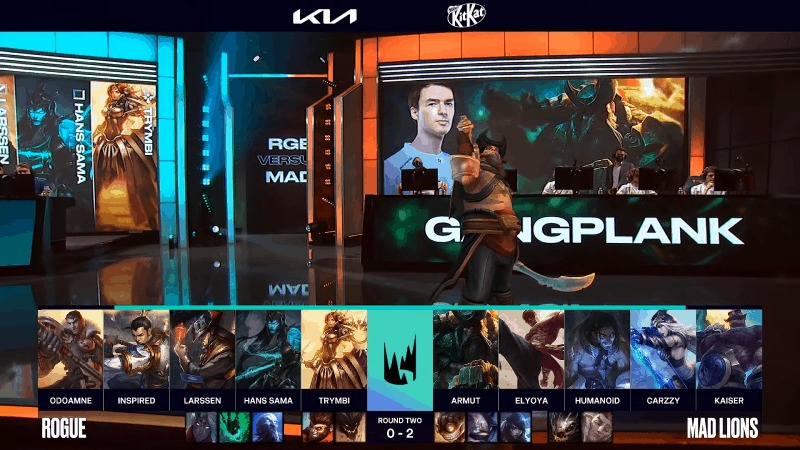 Game Three saw Rogue picking their signatures in Kalista and Twisted Fate, and also locking out Armut from the game by picking and banning his picks. The game plans switched around as the Lions drafted for team fights and Rogue drafted for the early game and skirmishes.

The match went as expected when Hans Sama and Trymbi took Kaiser down for First Blood around the two-minute mark. Shortly after, Inspired invaded the jungle of Elyoya, almost taking down his Lee Sin. The Spanish Rookie got out with his life but the Lions lost Humanoid after him and Armut tried to help their jungler, but Rogue’s players had the same idea and came out on top. After this, the teams started really going at each other, diving constantly across the map, taking down Armut and Trymbi multiple times. Rogue got the upper hand, having a 3k gold lead at six minutes, also punishing MAD Lions when they tried to gank their bot lane. Rogue then deepened their lead by taking the top and both mid turrets, while the MAD Lions focused on getting Drakes.

Even though they were down by 6k in gold, the MAD Lions weren’t backing off. They went at Rogue relentlessly, constantly fighting, trying to find a lead or some scraps of it with tooth and nail. At first, they found semi-good fights around the 20-minute mark, then find truly good fights despite being down 8k in gold. After that fight, they took down the first Drake, opening themselves up to the Dragon Soul. However, Rogue was still too strong to fight properly, so MAD had to look for opportunities when the odds were in their favor. They did just that, getting the Cloud Soul and closing the distance between them and Rogue. Towards the end of the match, the Lions got Baron and Elder Drake back to back, and with Elder, Rogue didn’t stand a chance. It was a comeback akin to the Spring Finals.

And with that, MAD Lions beat Rogue 3-0 in the Upper Bracket Finals of the LEC Summer Season. The Lions were really dominant in the first two matches, and even after getting destroyed early game in Game Three, they found the bits needed to beat Rogue. The Year of the Lion seems to come along nicely with Humanoid and his team in the LEC Finals!

While MAD Lions celebrates, Rogue has to get ready for their match against the winner of Fnatic vs G2. The two former greats of the LEC clash tomorrow at 17:00 PM CEST!