It’s all silver scraps at the LEC 2021 Summer Playoffs as no team’s backing down without a fight. Underdogs are rising at the top while Kings are trying to protect their legacy. Just as we thought it couldn’t get any better, a tale as old as time emerges as G2 Esports will face their long-time arch-nemesis Fnatic. Both the teams have endured a lot this year with roster changes, dip in performances, but now it is time to leave everything behind and go all-in to leave a legacy for new generations to come.

Will Fnatic overcome G2 Esports and have a shot at Worlds, or will G2 Esports finally unleash its true potential and make a grand entrance towards the LEC and Worlds title? 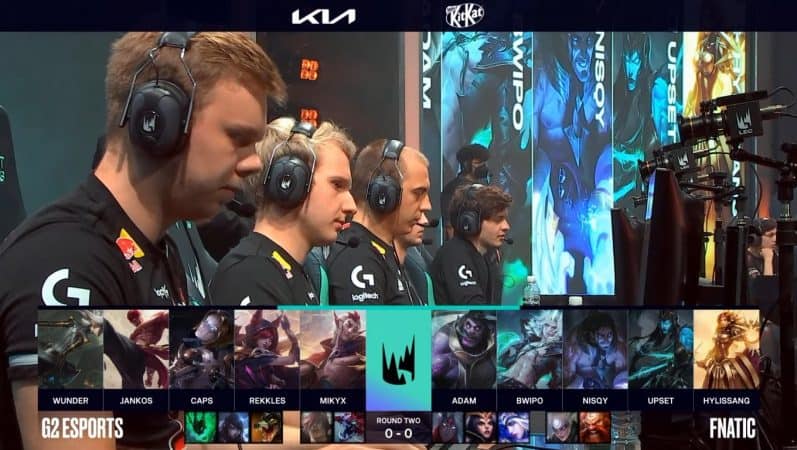 The match’s start was fiery as both teams were trading aggressively with each other. Fnatic secured the First Blood in the mid-lane on Caps to start the bloodshed. However, Jankos responded by ganking top lane and equalizing the score. Jankos shut down another attempt by Nisqy in the mid lane as he came just in time to save Caps. After winning a fight in the bottom lane, Bwipo made his way to the first dragon and secured it for the team. Caps, realizing that Jankos is nearby, took a fair fight onto Nisqy and Jankos finished him off. Bwipo and Hylissang came to finish the kill, but they got only one kill for the support while giving all the three kills to Jankos.

Another skirmish in the top lane, where Adam secures the kill on Wunder by Flashing onto him, bringing Fnatic back into the match. However, Jankos watches the overstep and punishes it in his jungle to get yet another kill. Afterward, Bwipo secured another dragon for the team and both the teams were farming for the mid-game and to reach their power-spikes. Then, suddenly, Adam finds Mikyx low in the jungle and solo kills him to stabilize Fnatic, alongside getting another kill on Caps in the mid-lane.

With Fnatic slowly coming back in the match, they decided to start Baron and baited G2 Esports to take a lousy team fight. They won that fight comfortably and only lost Bwipo in the process. Because of this, Fnatic secured the third dragon of the match to threaten Soul point. Soon after, Fnatic started the Baron again, but Caps baited them successfully to commit to the team fight fully and got three of their members quickly, leading to a Baron for G2 Esports. With the use of that Baron, they secured the Soul dragon to delay the Soul for Fnatic.

But Fnatic bounced back into the match by taking down Wunder in the top lane and securing Jankos’ Flash in the mid lane. With this, Fnatic secured the second Baron of the match. However, G2 Esports, being stronger, took the fight to Fnatic and got two members before others returned to the base. G2 Esports started pushing down the waves and secured two quick kills on Bwipo and Hylissang to walk in the base and crack the Nexus open to start the series on a win. 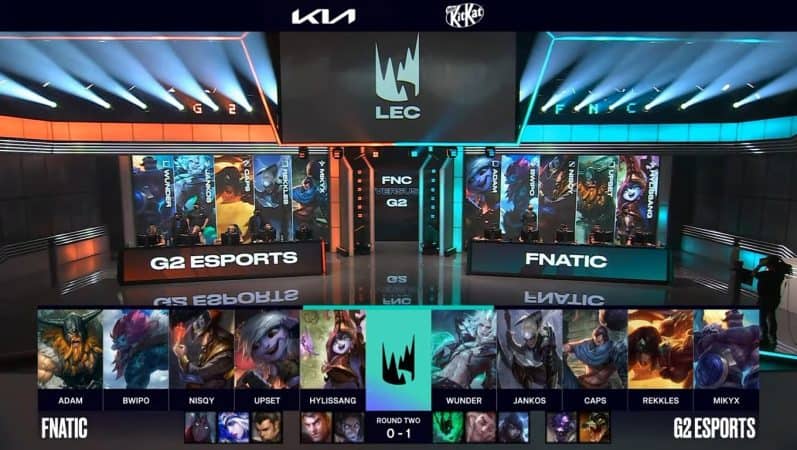 Fnatic came into the second match with all their guns blazing. They secured the First Blood on Caps’ Yasuo and after that everything went uphill. They kept pressuring G2 Esports and secured small leads in the side lanes while Bwipo secured the first dragon of the match. The first major team fight broke down in the river, where Fnatic took a favorable fight against their opponents. G2 tried to salvage the losing fight, however, they couldn’t finish Hylissang, resulting in a Triple Kill for Upset.

Bwipo secured the second dragon of the match and it was looking a bit gloomy for G2 Esports as they were desperately looking for an opening to come back into the match. Fnatic took down the mid and bot towers and made their way towards the top lane, where Bwipo caught Mikyx in the jungle and solo-killed him. After that, he overstepped and fell prey to G2 Esports’ wombo-combo.

In the driver's seat, Fnatic took a break and farmed in order to find a perfect opportunity to kill a Flash-less Rekkles overextending in the mid lane. Using the Rift Herald, Fnatic charged into the mid lane inner turret and got two kills onto G2 Esports, both of which were donated to Upset, making him a vicious ADC. Shortly after, Adam solo-killed Caps in the top lane while G2 Esports had to invest Teleport to secure the counter-kill on the Olaf. Following that fight, Fnatic joined the fray and Upset got another double kill to boost up his tally and answer the opponents. Fnatic further pushed their lead by securing the third dragon of the match.

G2, realizing the threat, took a fight to Upset in the mid lane but Upset being fed took down another four members of the enemy and made a getaway to further escalate Fnatic’s lead. Fnatic looked for more kills by baiting the Baron and they got more kills onto Upset and Adam to move towards Baron and secure it. G2 had to rush to the fourth dragon to stop the Soul but Fnatic had other plans. They pushed the lanes and G2 took a team fight in the bottom lane. However, Adam pushed the top lane into the Inhibitor, forcing G2 to retreat. After that, Fnatic used the Baron buff to push all the waves, take down towers and force fights in the mid lane to comfortably win Game Two, equalizing the series to 1-1. 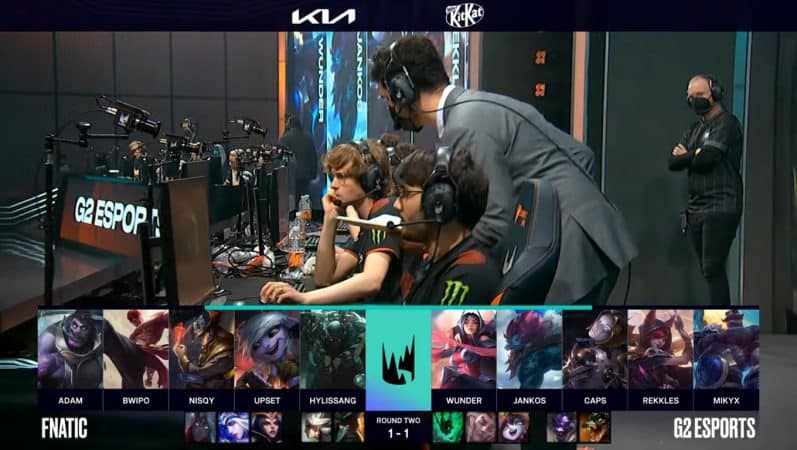 Fnatic looked very dangerous going into Game Three as all the lanes forced Flashes at a very early stage. After setting a dive on Mikyx, Fnatic secured First Blood in the bottom lane. After that, a skirmish heavy gank at the top lane took down Jankos. Wunder was low and tried to get Adam, but he was killed before completing his Q animation. After that dive, Fnatic and G2 invested Teleported as Fnatic grabbed the first kill, but a perfectly timed ult by Caps secured the kill on Adam.

In the midst of that, G2 Esports secured the first dragon of the match. After that, it became a total bloodbath. Kills were traded all around the map as both sides moved around the map to gank every lane. During this time, G2 Esports secured the second dragon of the match too. Later, in the top lane, Wunder pushed the top tower with the Rift Herald, but Bwipo took him down to save the tower just in time.

Fnatic poked G2 Esports to push through the mid lane finally and secure a few kills, while G2 also got some of the kills onto the enemies. After that, Fnatic decided to slow down and take the third dragon of the match while retreating. G2 Esports started the Baron and they finished it just in time to face the team fight. Fnatic was separated while G2 had great focus to get four kills, while Fnatic could escape with just one.

Fnatic regrouped to find Mikyx in their jungle and secured an easy kill onto him. Then, G2 Esports secured the third dragon for the team. A short time later, Fnatic turned an engagement from G2 Esports in a winnable team fight taking down two to their members and then turned towards Baron. G2 Esports was quick to respond and stopped them, but it turned out to be another team fight where players were fighting to gain control of the river. Though G2 Esports started out the Baron, Wunder's solo-kill onto Upset meant Fnatic couldn't contest the objective. G2 chased Fnatic through the top lane, but neither of the teams could get their hands on kills while Hylissang secured one onto Mikyx.

G2 backed off to use Baron Buff, which gave an open window to Fnatic to secure their second dragon of the match. Jankos solo-killed Hylissang and escaped from the scene to slowly put G2 Esports on the top. After that, G2 pushed mid and secured two Inhibitors from Fnatic. Lastly, G2 grouped five through the top lane, took the team fight to Fnatic, and won it convincingly to take down the Nexus and gain a lead in the series. 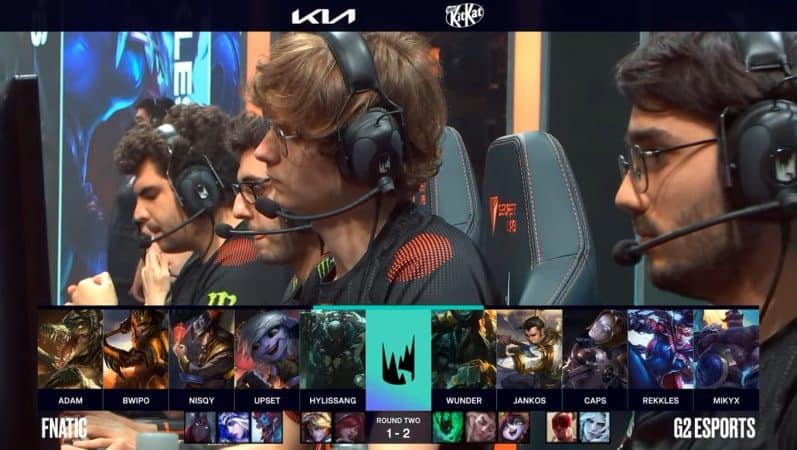 In a game that could end Fnatic's Worlds hopes, it was Adam’s famous Renekton pick that secured the First Blood onto Wunder, to nobody’s surprise. Meanwhile, G2’s set up a bot lane dive but it went a little wrong as Mikyx fell to Hylissang's Pyke for overextending. Next, Fnatic tried to engage on G2 in the mid lane but they got outplayed and G2 secured two for Jankos. While Fnatic got a kill in the top lane, G2 got the first dragon of the match. Shortly afterward, Bwipo caught Jankos in the jungle and solo-killed him, although G2 responded quickly and punished Bwipo for it. After that, Fnatic got their hands on multiple kills without losing anyone in the match. While G2 tried to push waves, Fnatic actively pushed them back and grouped for the objectives and dove enemies whenever they could.

After that, Fnatic got two dragons, along with the Baron. All the while they were continuing to get kills on G2 Esports in a game they showed up to dominate in. Fnatic achieved multiple wave pushes towards the G2 base and they split pushed every lane to finally overthrow and cut G2 to pieces. Finally, Fnatic pushed through the top lane and finished the match to bring the series to a single decider of who is getting their tickets to Worlds. 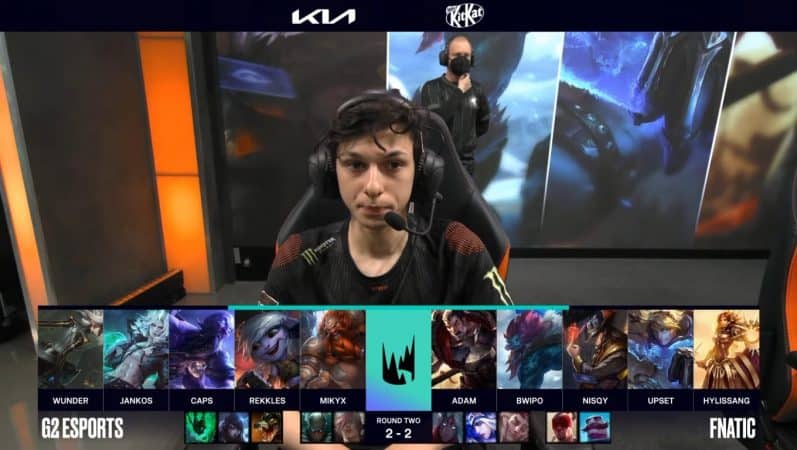 One fateful game was all that remained for these two European kings. Fnatic started the game on a strong note by executing a three-man dive on Caps and getting the First Blood. Adam on his pocket pick Darius got Wunder low but he died to the tower while diving the enemy top-laner. However, Wunder bizarrely came back to the lane to die instantly to Adam. Then, Adam secured another solo kill on the enemy top laner to gain a huge advantage in the lane. Meanwhile, Bwipo secured the first dragon of the match to push Fnatic further ahead. While both the teams traded a kill, Fnatic secured yet another dragon.

Afterward, Fnatic started pushing the mid lane while G2 Esports defended quite comfortably. But Jankos got caught in the jungle, and as G2 started to channel Ryze ult, it was blocked by Bwipo’s Trundle pillar, which gave Fnatic another three kills to switch the momentum of the match.

Fnatic kept on chasing G2 Esports and actively looked for engages on them which caused even more kills donated to the side of Fnatic. Seeing their opportunity, Fnatic took down the Baron and pushed the bottom lane. They almost took down the Inhibitor but remained patient and came back with full purchases. Finally, they pushed through the mid lane, won one final fight and finished the last match in a dominating fashion to kick G2 Esports out of the Worlds ticket and get their name on the card.