Dignitas and Evil Geniuses took to the stage in the first game of the LCS Championships!

Today, the inaugural LCS Championships kicked off with a match between Dignitas and Evil Geniuses. Replacing the Summer Playoffs of the past, the Championship is where teams must prove themselves to take the title and a spot at the World Championship. Even though they won't be able to do it in front of a live audience in New Jersey, Evil Geniuses ("EG") and Dignitas ("DIG") were the first ones to battle on Summoner's Rift, and though this was expected to be a fairly one-sided matchup, both teams were eager to show what they're made of! 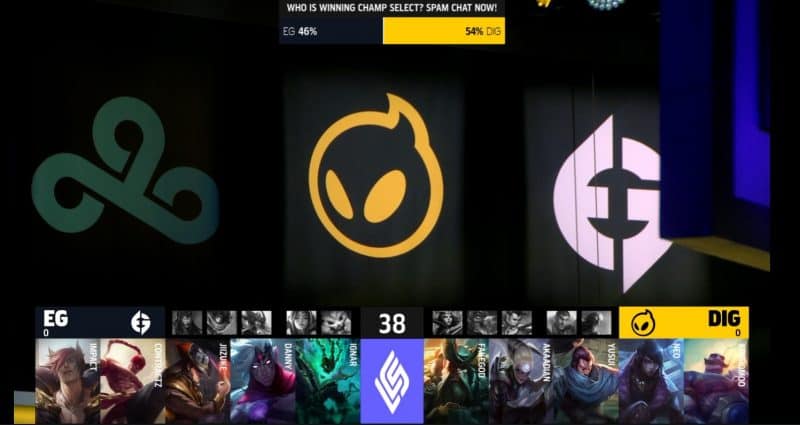 As many expected, EG came into the series ready to win. And the action started early. When DIG went for an aggressive play in the bottom lane, the solo laners Teleported in and it became a four-minute 5v5. But EG secured the early lead by getting two kills. A few minutes later, chaos broke out on the bottom half of the map, as a mid-jungle 2v2 got one kill back for DIG, but EG's bottom lane roamed to get a return kill. Then, as they returned bot, a skirmish broke out where more kills went over towards EG.

While EG had a definite lead at this point, DIG didn't look totally out of it yet. But that state didn't last long. DIG decided to take Rift Herald, which they did get, but EG forced a team fight afterward. It was a slaughter, as four died from DIG and EG ran away with a huge gold lead. From here, DIG looked out of options and was desperate. As a result, they tried to force a fight, and to their credit did get a good engage with their Diana-Yasuo combo. But they simply didn't have enough damage, and EG turned the fight around to pick up three more kills.

After that attempt, EG was in full control. They moved around the map to knock down towers and grow their gold lead. Eventually, they found two picks onto DIG members and went straight to Baron. Without any issue, EG secured the Baron buff and went to work. After a clean siege from EG, they pushed DIG back into their fountain and took an easy Game One victory. 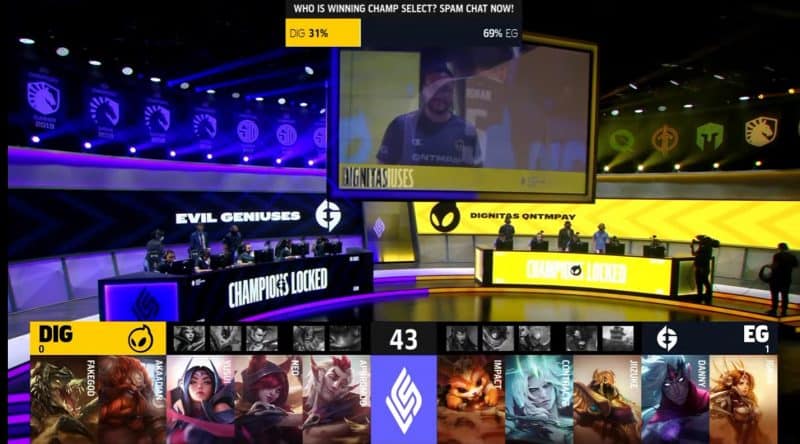 After a one-sided Game One, the train flew off the rails to make a crazy Game Two. This time, DIG managed to start off on their strong foot. Akaadian killed Impact for First Blood, and at the same time, the DIG bottom lane traded up two-for-one in kills in a lane fight. While EG was able to equalize the gold difference by claiming the Rift Herald and the First Tower bonus with it, DIG was looking alive.

However, EG wasn't going to sit idly by and watch the game slip away. They picked a fight in the bottom lane and capitalized on some DIG overconfidence. EG cashed in four kills while losing none of their own, and now they had the gold lead. But EG couldn't hold onto the lead forever. At 24 minutes, EG was overconfident this time and tried to rush Baron, but DIG showed up and slaughtered them for it. After killing four, DIG took a mid tower and the Baron too.

A game of throws

Though they couldn't destroy much of EG's base with the Baron buff, they had a solid handle on the game. That was until EG had a massive outplay. At 31 minutes, DIG picked off Jiizuke in the mid lane and knocked multiple health bars low. Chasing for more, DIG went too far and were cut down one by one by Contractz's Viego, who ended up getting an impressive Quadra Kill. Along with a Quadra, Contractz and EG secured a Baron buff too.

Now all EG had to do was not throw like both teams had done multiple times this game. Of course, there had to be one throw left in the tank though. While EG pushed all three lanes, Aphromoo found a beautiful pick onto Danny. After losing their ADC, the EG members died one after the other in a bizarre lack of awareness. With the win practically handed to them, DIG was able to walk straight through the top lane, take EG's Nexus and tie the series 1-1. 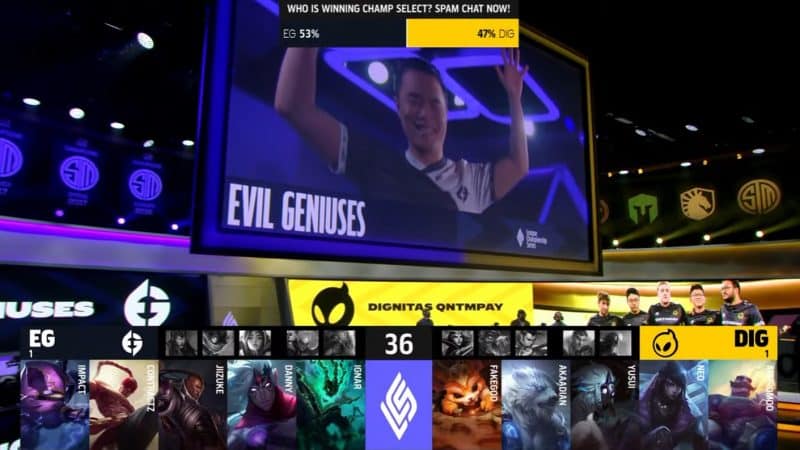 Not enjoying that they threw away Game Two to DIG, EG came into Game Three ready to make a statement. And they certainly did. The early laning phase was absolutely commanded by the EG solo laners and both were growing gold leads within the first few minutes. When the first skirmish broke out near the mid lane, EG didn't back down and claimed First Blood. A few minutes, Contractz and Jiizuke moved top together to kill FakeGod under his tower and take his tower to set him incredibly far behind, and to propel Impact ahead.

To their credit, DIG did pull off a dive of their own in the bot lane to get a kill, but EG was outpacing them. Jiizuke's Lucian was absolutely curb-stomping Yusui's mid Kindred pick, and because of that, EG always had massive mid priority, meaning he could roam any time he wanted. In his wake, towers and champions fell all around the map. At only 20 minutes, EG had already obtained a 7k gold lead.

Seeing as they had such a huge lead, it was only a matter of time before EG started up the Baron. When they did, EG fought DIG in their jungle and killed two before securing the Baron buff. Afterward, EG made short work of DIG's base and won one decisive team fight before winning Game Three. 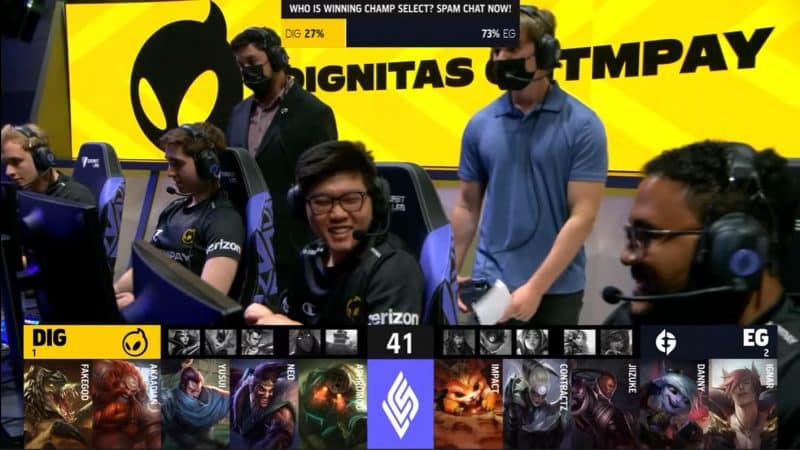 In Game Four, DIG's backs were against the wall and the onus was on them to turn the series around. However, it was EG who came out to an early lead, as Contractz ganked the bottom lane to secure two kills for his team. DIG struck back though, as Akaadian ganked and killed Impact top before FakeGod straight-up solo killed Impact a minute later. A nine-minute team fight in the top side of the map went in EG's favor two-for-one in kills but this game looked like it could go either way.

It was around this time where the teams split the map. DIG focused bot, taking a tower there and an Ocean Dragon. Meanwhile, EG went top, using the Rift Herald to take two towers and help them pick up a kill on FakeGod. The real decisive moment of the game came at 17 minutes. Here, EG smashed DIG, killing four members before adding a Cloud Dragon and a middle tower too.

From here, EG had an easy time of it. After getting two picks, they slammed the bottom lane and destroyed the first Inhibitor. Shortly after, EG rushed the Baron, and despite securing the buff, they had to sacrifice two of their champions for it. As a result, EG couldn't get too much done during the buff's duration, especially after DIG caught out Danny. It took a while, but eventually, EG found their fight in the mid lane to get a kill and snowball it to more kills, and ultimately a victory.