It was Cloud9's and Team Liquid's turn to make their first showings at the 2021 LCS Championships.

After a 3-1 victory on Day One by Evil Geniuses, it was time for two more sides to enter the Rift. For the Summer 2021 Championships, despite hopes that we’d see teams fight it out in front of an audience, sadly, those dreams were dashed before yesterday’s matches. That said, Cloud9 (“C9”) and Team Liquid (“TL”) were at the LCS Studio in LA as they kicked off their shot at a title. To kick things off, First Blood went the way of TL after Jensen was able to get the perfect start to a fight on Perkz with the help of his jungler. C9 was able to quickly make TL pay, with Blaber able to get a kill onto Santorin. The back-and-forth continued, with Jensen able to pick up yet another kill onto Perkz, who started to fall behind early. TL continued to keep up their pressure on the top side of the map with another kill. By the 10-minute mark, TL had a small 500g lead.

C9 swapped a kill in the top side for two turrets going over to TL in the middle and bottom lanes. C9 did manage to pick up their second drake, however, TL looked like the stronger side as the two postured for a team fight. It wouldn’t take long until we got it. Moments later, the teams both set traps for each other in the middle lane. Despite Blaber playing behind the TL line, it was read by TL and they took the fight two-for-one.

With Baron up, and Soul point available for C9, the game slowed down with TL 7k ahead. At this point in the game, C9 knew they had to make the next play count. Meanwhile, TL knew they just needed to take the Baron to hopefully end the game. TL decided they’d had enough waiting for C9, as they pulled the trigger on an engagement in the C9 jungle. With Baron up, TL took down two members of C9 and claimed the Baron power play. Using the Baron buff, TL took down both the middle and bottom lanes of C9, and despite C9's best efforts, TL was able to walk into their base and move 0-1 ahead in the series to make a massive statement. 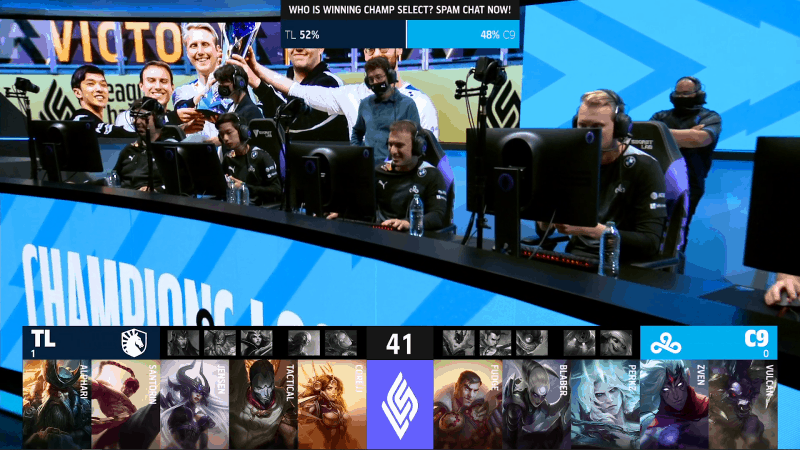 Following a game defined by TL dominance early, there was a big, early game, level three fight on the top side to start the action in Game Two. Despite a good defense by C9, TL was able to come out on top in it. Afterward, C9 made a 2v1 dive on the bot side, picking up a kill onto Tactical, though they traded one back in return. But it went from bad to worse for C9, as their early game poke just wasn’t able to come to the party. TL moved to an early 4k lead and C9 looked desperate.

Like in Game One, TL slowed down the game once they’d ballooned their lead to 7k, choking C9 out across the map as Baron spawned. TL took their moment as the clock hit 23 minutes while C9 wasn't able to stop the bleeding with two members dropping. Right after, TL took an easy Baron buff as they looked to move the series to 2-0. With Baron, TL took down two lanes of towers and Inhibitors. C9 held out for now, but the game looked to be going TL’s way.

It was the very next play that would see TL take down C9, as they looked deflated already with just one more game potentially left to play. TL pushed into the mid lane and the rest was history. Without Baron, and with C9 having two members outside the base, TL pulled the trigger and collapsed on the Nexus towers, taking them to a 2-0 lead. After two defeats in a row, C9 had all eyes on them to show signs of life in Game Three. Just like the games before, TL punished the mid lane of Perkz in the opening minutes of the game and killed him once again for First Blood. Fudge was able to make a Flash play on the top side of the map to get C9 some much-needed gold, however, he drops in return as the top lane pair go even. After that trade, there was more trading on the top side after TL looked to dive C9. While Fudge would lost that play, he managed to get on the board shortly after as C9 found themselves ahead for the first time in the series.

With the same gold lead still intact, C9 was able to level out the kills to 4-4 as they continued to keep up pressure across the map. With the gold lead stabilizing, the nerves started to show on the C9 side, with the first team fight victory likely to be a major decider in the match. A small fight broke out around the Rift Herald, and it was C9 this time who were able to take a big two-for-zero win. Next, a fight broke out on the top side, and despite TL looking like they had the fight, C9 was able to turn it around. They took down four members of TL to keep their series alive. With just one member lost, they moved onto the Baron and got a solid handle on the match.

With Baron buff secured, it was an easy push top side for C9. While they left the Inhibitors, they pushed TL inside their base and secured a 7k lead. C9 finally came back to the TL base with Baron spawning again. With TL stuck inside their base, C9 looked to either claim the buff or bait TL into dying. But it was not the fight C9 wanted, with members split between the fight and the Baron, TL is able to get a big first kill as C9 was left running. TL secured the buff, crucially denying C9 from a victory for the next five minutes.

Eventually, C9 pushed into the TL base with the Baron buff dropping off, and this time they didn't falter in the fight. Picking off two members of TL quickly, C9 took down two TL Inhibitors and moved back to 10k ahead. This time, C9 did actually end the game, with TL not able to stand in their way with Baron buff on their back. C9 kept the series alive, but could they go all the way? Coming off a win finally, C9 had to find two more wins. And to start the action off, it was a big early game fight in the mid lane, and despite C9 doing massive damage to two members of TL, it wasn’t enough and TL was able to recover. It’s yet another first blood for TL, though C9 was able to get one back right away. The next fight went the same way, with TL engaging onto C9. Here, it was C9 this time who picked up the first kill, though TL did reply.

The next big moment went TL’s way, as they picked up a Double Kill in the mid lane, taking advantage of earlier level six from their jungler. After that, another fight erupted, and this one went the way of TL too, despite C9 getting the first kill TL again came away ahead and their lead moved to shy of 3k. It looked like it was TL’s lucky game. The next fight saw C9 able to take down one member in the Rift Herald fight, but TL took down two while having two members escape on less than 10% hp.

While TL looked to be dominant early, C9 found a massive three kills on the top side, when one was all they had dreamed of. With Baron up, they looked to claim it, but Santorin came in just when his team needed him most to steal it away. With that Baron steal, TL pushed into the C9 bottom lane and that’s all she wrote. C9 put up the best fight they could, but TL just had too much in the locker as they advance to the next round. C9 will now move down into the Lower Bracket as they look to keep their LCS hopes alive.