100 Thieves or Team Liquid, who came out on top and booked a trip straight to the Finals?

It's been a wild ride in the LCS Championships thus far. Two weeks of competition have narrowed down the teams to only a few, and this weekend we've already seen Evil Geniuses eliminated by Cloud9 and TSM advance through Immortals. But that was all in the Lower Bracket. Up in the Upper Bracket, Team Liquid (“TL”) and 100 Thieves (“100T”) were the last two teams to remain. Today, they took to Summoner's Rift to prove who the best really is, as well as to avoid having to play another series to get to the LCS Championship Finals. In one of the most anticipated matchups of the post-season, both of these teams were ready to throw it all down in this best-of-five! Like almost all of TL's games this post-season, Game One of this series was clean and clinical. The opening minutes were rather quiet but there was a definite focus around the top side, as TL wanted to get Alphari's Jayce ahead while 100T had to keep Ssumday's Ornn safe. When both teams' junglers hovered around this lane, instead of going to the lane, Santorin cut down Closer and secured a solo First Blood for himself.

After this, TL secured the Rift Herald, though 100T picked up a dragon in return. It was still pretty close, but a misstep from TL in the bot lane cost them a death, as Ssumday Teleported to save his ADC and take Huni's Leona's life. A 16-minute team fight went one-for-zero in kills in 100T's favor, which boded well for them, but TL was still in a good position with strong solo lanes. This proved true at 18 minutes when TL outplayed a Rift Herald team fight two traded up two-for-one in kills.

Two minutes later and the teams met back in the mid lane. Though 100T sniped a kill early in the fight, a beautiful four-man engage from CoreJJ's Rell set his team up for three kills. TL didn't manage to get the Baron here but that time wouldn't be long out. At 27 minutes, 100T tried to take an Infernal Dragon, but TL showed up big and slaughtered 100T, killing all five members then the Baron too. Under the pressure of Baron buff TL, 100T had no answers. TL dove straight into the 100T base, killing multiple 100T members, then ultimately the Nexus to get an early series lead. Domination for TL in Game One quickly flipped a switch and turned into domination for 100T in Game Two. It didn't start off all that well for them, as TL three-man dove and killed Abbedagge for First Blood. However, 100T swiftly retaliated when TL invade their jungle, getting a fantastic Diana-Irelia combo to near-instantly kill two from TL. A couple of minutes later, 100T got revenge for Abbedagge by diving his opposing mid lane, Jensen, under his tower.

Moving past the 10-minute mark, 100T never let their foot off the gas. They fought TL every chance they found, winning picking up five kills from two fights between 10 and 11 minutes. 100T complemented all these kills with objectives, solidifying their lead further. Then, at 22 minutes, a real back-breaking fight broke out. In it, 100T obliterated four TL champions, a mid lane tower and their third dragon.

Afterward, 100T waited a few minutes until the next dragon spawned. When it did, 100T was eager to obtain the Mountain Soul and TL knew they couldn't give it up. Unfortunately, there was nothing they really could do and in the inevitable team fight, 100T secured four more kills, the Mountain Soul and even a Baron to boot. With all this, they still weren't able to end though, so it came down to the Elder Dragon. Unsurprisingly, 100T dominated this fight, then rushed TL's base to finish it off and claim the Nexus to tie the series 1-1. 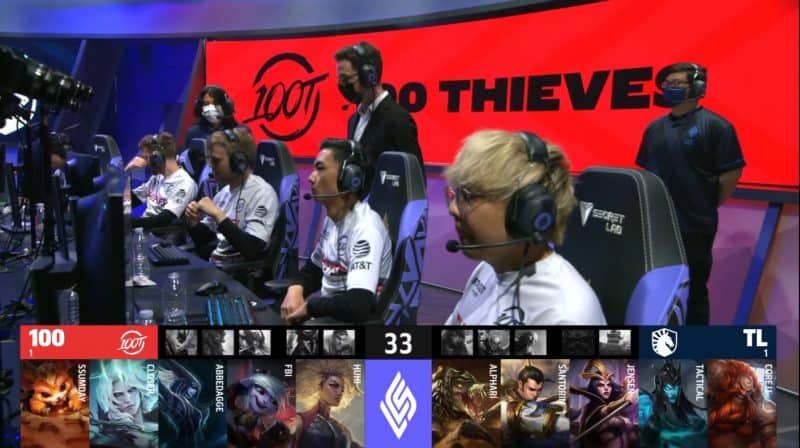 Game One and Game Two showcased one-sided games in each team's favor but Game Three was much different. It did, however, appear that it would be an easy start-to-finish win for TL though. At only the three-minute mark, action broke out across the map, as a one-for-one trade in the bot lane 2v2 got each team's support a kill while a skirmish around the mid lane went 100T's favor, and Closer's Viego pick picked up its first kill.

Despite 100T coming out swinging, their control on the game all but slipped away at 16 minutes. At this point, 100T contested TL's Herald take but TL was more than ready, punishing 100T by killing all five champions. From here, TL had solid control. They secured their first Baron at 20 minutes soon after getting two kills, which helped them destroy a number of outer towers, but not break the base.

This was a godsend for 100T, giving them more time to scale up and hope for a miracle. But when the second Baron spawned, TL promptly slew four more 100T champions and begin another siege. Moving towards the bot side, TL was confident, but maybe too much so. They fought 100T in what was a miracle fight for them and lost all five members, not even taking down one from 100T. As a result, Closer got a Quadra Kill and helped his team gain much-needed gold, as well as the Mountain Soul.

Even 6k gold down still, 100T was emboldened from this fight. Eventually, everything came down to Elder Dragon, which both teams fully focused on. At 38 minutes, a tense fight erupted where multiple members from both teams dropped, but neither team claimed the objective. Two minutes later though, the teams went for another fight, but once again, it was fantastic from 100T. They pulled off a great engage and stomped TL, despite a gold deficit still, and grabbed the game-ending Elder Dragon buff. As 100T rushed mid, TL desperately tried to throw themselves at them to stop them, but to no avail. In a game reminiscent of the third MAD Lions vs Rogue game hours earlier, 100T persevered past an over 10k gold deficit to take the win. Matchpoint and the potential elimination game for TL. Similar to last game, the bottom lane duos went wild in the early game, except this time they didn't wait for level two. At just level one, the duos fully committed on each other and went one-for-one again, with both kills going to the ADCs. It was a fun way to start but the next few minutes were less exciting for sure. There were a couple of objective takes, but nothing too important.

That was until 11 minutes. Here, a 3v3 broke out in which 100T walked away with a relatively easy kill. Four minutes later, 100T looked to make more of a lead for themselves by taking Rift Herald. They had no trouble with this, though FBI practically donated a kill to TL to make the lead lessen. Regardless, 100T used the Herald to take two towers top and gain a ton of gold.

For about the next 10 minutes, there was little action. TL picked off Ssumday once, and there were some tower trades, but things were quiet. Suddenly, out of the blue, TL decided to rush the Baron. Funnily enough, 100T couldn't successfully contest and the buff went to TL, getting them right back into the game. 100T stalled TL's siege with a pick onto CoreJJ but it was merely a slight annoyance. At 28 minutes, TL found their moment and dove under 100T's bot lane tower to clean up four kills. Just like that, 100T let the game slip away and TL picked up the slack, moving straight into the base and demolishing the Nexus. With the series tied 2-2, it was time to cue Silver Scrapes. This fateful Game Five was everything viewers could hope for. At level one, more craziness happened, but instead of just in the bot lane, 100T got the whole team involved and invaded TL's red buff. It was a close fight but only ended up with a one-for-one kill trade. After that, the bloodlust died down but Closer was a man on a mission, claiming a Mountain Dragon and Rift Herald by eight minutes. On the flip side, Alphari eventually grew tired of laning against Ornn and decided to gank mid to kill Abbedagge.

Overall, the state of the game was fairly even. 100T managed to move ahead of the curve when they used the Herald bot for plates, took an Infernal Dragon and picked off Jensen's LeBlanc. It wasn't game-breaking, but it was a start for 100T. However, TL wasn't going down without a fight, so at 16 minutes, they threw everything they had at 100T to win a team fight by grabbing four kills.

After this, there were some tower takes, though neither team really made any headway. That was until 25 minutes. After finding a pick onto Jensen, 100T decided to try and take Baron. Instead of trying to rush it, they took a kill onto CoreJJ and left. One kill wasn't enough of a boon though, as at 28 minutes, the teams met at dragon, which resulted in a fight. This time, it went the way of TL 2-1 in kills.

All of a sudden, in a fit of desperation, 100T rushed Baron but attracted TL's attention. TL quickly punished 100T's overeagerness and killed all five 100T members. The result was that the Baron went to TL, who only needed one fight after that to completely rout 100T, smash their Nexus and take the series 3-2. With this win, TL moves straight to the LCS Championship Finals, whereas 100T will have to face the winner of Cloud9 and TSM for that honor.